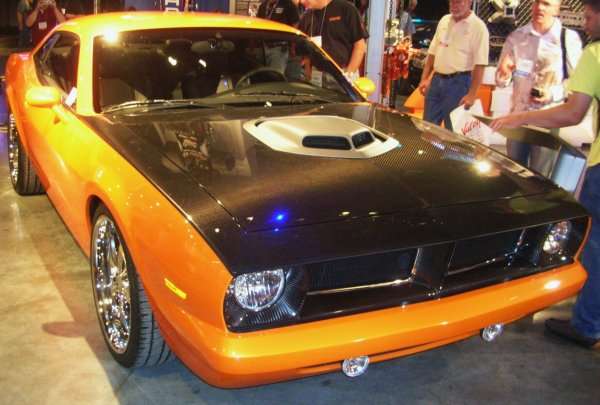 I had a conversation today with an industry insider who explained to me that he was working with a Dodge Challenger powered by the new Hellcat Hemi - a car which those folks handling the car explained was being used for durability testing for the upcoming Cuda.
Advertisement

It seems as though the arrival of the 2015 Dodge Challenger and the 2015 Dodge Charger has caused us to forget about the previous rumors that the Chrysler Group would reincarnate the Cuda name for an SRT-specific model based on the Dodge Challenger. Roughly two years back, it was widely expected that the Cuda would arrive to join the new Viper as an SRT branded vehicle and the new Cuda would pack a supercharged Hemi with output similar to that of the mighty Viper.

At the 2013 New York International Auto Show, SRT CEO Ralph Gilles acknowledged the rumors of the Cuda, explaining that the company wanted something like a Cuda to be more than just a rebadged Challenger. He told us that we would see what he meant “next year”, leading many of us to believe that the next generation Dodge Challenger would debut at the 2014 New York Auto Show – which has been confirmed. We also learned that the supercharged Hemi does exist and the new “Hellcat” V8 would power the top of the line next generation SRT Challenger…but what about the Cuda?

At some point, everyone seemed to forget the rumors about the Hellcat Hemi powered SRT Cuda and the attention turned entirely to the next generation Dodge Challenger. This is probably because we see so many test mule Challengers on and road around the country with body cues that lead us to believe that they are powered by the supercharged Hellcat Hemi. However, is the Chrysler Group really going to test the new SRT Cuda out on the open road where the automotive paparazzi can snap pictures to sell to the big media outlets? No…they are going to use cars that look like the 2014 Dodge Challenger on the outside with the drivetrain and suspension components of the upcoming Cuda.

The fact that the company representative who spoke with my informant specifically said that it was a durability test car for the upcoming SRT Cuda proves that the Cuda is still in the works. We might not see it at next week’s 2014 New York International Auto Show (although there is a chance that we could), but it seems that the SRT brand will definitely have a new sibling for the new Viper in the Street and Racing Technology family.

With this in mind, I have to wonder if we will really see a Hellcat Hemi powered 2015 Dodge Challenger with 600+ horsepower or if the Chrysler Group will reserve this new monster engine for the new SRT Cuda. The Cuda will likely be based on the Challenger, but it should offer better performance in every area while still leaving room in terms of performance for the Viper. The 2014 NYAIS opens to the media next week so we should have a better idea of what is coming from the SRT group in the next week or so. Even if the Cuda doesn’t debut in the Big Apple, the introduction of the next generation Challenger – and whether or not it comes with the supercharged Hellcat Hemi – will offers some insight into whether the Cuda is coming sooner or later.

(Shown above is the 2007 Concept Cuda from the SEMA Show. This is a Dodge Challenger that Chrysler turned into a Cuda. Coincidence? I think not.)