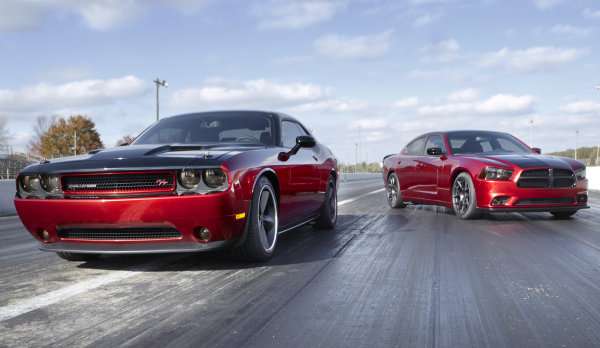 The Chrysler Group has announced full details on the high performance Scat Pack options for the Dodge Challenger R/T and Dodge Charger R/T – including the power increases and prices for each of the three packages.
Advertisement

The modern Scat Pack program for the Dodge Charger R/T and the Dodge Challenger R/T were announced at the 2013 SEMA Show and while they drew plenty of attention at the huge Vegas convention and across the automotive media – the company didn’t state how much of a power increase would come with those packages. Fortunately, Chrysler has announced both the full power figures and the pricing for the new Scat Pack options and the increases across the board are very impressive.

“The new Scat Pack kits reinforce our commitment to the performance arena,” said Pietro Gorlier, President and CEO of Mopar, Chrysler Group LLC’s service, parts and customer-care brand. “By maintaining the vehicle warranty, we are demonstrating to customers our confidence in the kits, which were built to exactly complement the Dodge Challenger and Dodge Charger by working hand-in-hand with the engineers who use factory specs to create these vehicles — exclusive knowledge available only to Mopar.”

Scat Pack 1 includes a Mopar cold air intake, a Mopar cat back exhaust system, a Stage 1 performance PCM tune and a low restriction air filter – features which work together to add 18 horsepower and 18lb-ft of torque to the Dodge Challenger R/T and Charger R/T. This package carries an MSRP of $2,195.

Scat Pack 2 is comprised of a Mopar high performance camshaft package and a Stage 2 performance PCM tune for an increase of 30 horsepower for the 2014 Challenger and Charger in R/T trim. The announcement of the power output doesn’t mention the torque increase, but it does list the $1,895 MSRP. I would guess that the torque numbers are similar to the horsepower increases.

Scat Pack 3 is the most comprehensive and the most expensive of the new high performance options for the 2014 Dodge Challenger R/T and Charger R/T. This package includes Mopar performance CNC ported cylinder heads, Mopar headers, Mopar high flow catalytic convertors and a Stage 3 PCM tune…all of which work together to add a whopping 58 horsepower and 47lb-ft of torque. This raises the total output of the Dodge Challenger R/T with a manual transmission up to 433 horsepower and 457lb-ft of torque while the Dodge Charger R/T jumps to 428 horsepower and 442lb-ft of torque. Those figures are all higher than the specs of the first generation Challenger and Charger SRT8 which were powered by the 6.1L Hemi. This package carries an MSRP of $4,995.

When you add up all three packages to reach those optimized outputs, the whole Scat Pack shebang will cost a Dodge Challenger R/T or Charger R/T owner right around $9,085. That is a big chunk of change, but it should be noted that these Scat Pack performance components both carry their own warranty while also preserving the factory warranty on the vehicle. While many high performance aftermarket components will void your manufacturer’s warranty – the Scat Pack upgrades will not.

"The Scat Pack factory stage kits can help boost 5.7-liter HEMI performance up to an additional 58 horsepower and 47 lb.-ft. of torque, allowing Dodge enthusiasts to extract the maximum performance from their vehicles without the fear and guesswork typically associated with modifying late-model vehicles," said Tim Kuniskis, President and CEO, Dodge Brand. "And now with a warranty guarantee, they can do so with the peace of mind that their manufacturer's warranty remains intact."

The Scat Pack program will officially launch in the spring so those interested Challenger and Charger owners should contact their local Dodge dealership for purchasing information.

PAul wrote on October 22, 2014 - 8:35pm Permalink
This is plain dumb! An extra 9K will take the total cost of my RT to near SRT levels... Why wont anybody just buy the SRT and get 485HP instead of 433??? I love the challenger but Dodge got their pricing really bad on this Scat pack deal. Also, now they have come out with R/T scat pack carwith 485hp. SO I believe the demand for these performance upgardes should be around ZERO in the market... Just buy the R/T scat pack for under 40K and be happy in your new Challenger!