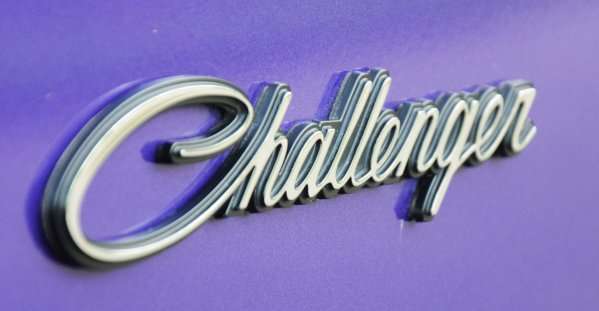 Insider: The Next Generation Dodge Challenger Will "Blow Your Socks Off"

I recently had a chance to speak with an individual who has seen the next generation Dodge Challenger and while he wouldn’t give me any real details, he assured me that anyone who loves Mopar muscle cars will love the next Challenger – stating that it was going to “blow my socks off”.
Advertisement

My discussion with this gentleman really didn’t reveal any new information on the next generation Dodge Challenger, but he reiterated several times that the new Mopar muscle coupe was going to have no problems making Dodge fans fall further in love with the brawny muscle car. He finished the conversation by telling me that it would “blow your socks off” at which point I asked him if that was a supercharger pun. He just laughed and shrugged…take that as you like.

It is all but guaranteed at this point that the next generation Dodge Challenger SRT variant will be powered by the new Hellcat Hemi. This supercharged V8 is expected to pack somewhere in the area of 600 horsepower with some rumors suggesting that it will pack as much as 640 horsepower. I am skeptical that SRT will give the Challenger SRT the same power levels as the SRT Viper, but even 550-600 horsepower will help make the new top of the line Challenger one of the most formidable opponents in the muscle car world. Would 600 horsepower knock my socks off? Probably.

What we are really left wondering is how the appearance of the next generation Dodge Challenger will change compared to the current models. There have been plenty of spy photos and videos floating around the internet showing what many believe to be Hellcat Hemi-powered Challengers wearing minor body camo and all of these show a car that looks pretty much identical to the current models. It is expected that the next generation Challenger will receive a lightly refreshed front fascia on the SRT models to allow more airflow for the supercharged Hemi along with a new taillight treatment that will include some LED technology – presumably something similar to the “racetrack” design featured on the Dodge Charger, Dart and Durango.

Would a next generation Dodge Challenger that is shaped the same as the current models expect with a refreshed front end and taillights blow my socks off? I don’t think so. It might…but I will need to see it to make that call.

One of the most important points that critics of the current Dodge Challenger focus on when slandering the mighty Mopar muscle car is the weight of this beast. The Challenger is built on a variant of the sedan chassis used for the Dodge Charger and Chrysler 300 so it offers more interior space than the Ford Mustang or the Chevrolet Camaro, but it also weighs significantly more. That difference in weight has made it tough for Challenger V6 and R/T owners from competing with either the base model or base V8 versions of the Mustang or Camaro.

What spy photographers believe to be the next generation Challenger appears to be the same size as the current models so it will likely be bigger, but can the use of new metals make it a little lighter? Even if the Challenger is just as big as it is right now, the use of high strength steel and lightweight body panels could cut weight and that weight reduction could go a very long way in helping the base Challenger compete with the base Mustang or Camaro while a lighter Challenger R/T would better compete with the Mustang GT or the Camaro SS.

Would a Challenger that receives a big enough weight reduction to allow it to compete at both the base V6 and non-premium V8 levels blow my socks off? I think so.

Finally, the next generation Dodge Challenger will likely feature a culmination of interior technologies including the same big, bright touch screen infotainment system that is employed in the Dodge Charger. The new Challenger should also have an adjustable thin film transistor (TFT) driver information center in the gauge cluster, similar to so many other cars in the Dodge, Ram and Jeep lineups. Relative to the Mustang and the Camaro, this technology in the Dodge Challenger will probably blow my socks off… or at least one sock.

Eugen wrote on March 13, 2014 - 3:16pm Permalink
For example i'm a Dodge Challenger fan...despite that, i think that it's weight isn't something strange. Look at BMW M5 or M6 !!! 4200-4300lbs..What SRT8 really needs is some torque...like old HEMI's..somewhere around 660-670lb-ft
Auto Motive wrote on March 24, 2014 - 6:57am Permalink
I agree but if you decide to track or auto cross your new car its has to be lighter and more nimble. My daughters Challenger 392 is a beast in a straight path and a great touring car but not a track car. Way to heavy. I want a Cuda high hp and selective track control in a light weight package around 3500 lbs or so. I am willing to pay premium $75k or so and want the Cuda to compete with the Z28.
Eugen wrote on March 24, 2014 - 12:19pm Permalink
But look at M5 F10 ...it has 4300lbs and it's also good on track, isn't it ? Moreover, a muscle should be a muscle, big, enormous, heavy....when you drive a muscle, you should feel that's a muscle, not a Honda S2000.. I think they shouldn't reduce weight. They should make more hp and torque.
John Goreham wrote on March 13, 2014 - 4:33pm Permalink
I have no doubt Fiat can create a Challenger that will have awesome power and sell to its limited expectations. The question is, can it make a Dart or 200 anyone wants?
Frank wrote on March 13, 2014 - 9:37pm Permalink
Just fyi ive been hearing alot of rumor that dodge may put the viper v10 engine in its chargers/ challys. Maybe thats why he shrugged. Superchargers are already available, so if these so called 640 hp challys cant beat a former year chally that has aftermarket supercharger for a fraction of the price, then that may be disappointing. Not to mention the insane amount of drivetrain loss making an even less actual RWHP number than 640 which is hp at the crank. However, a V10...that would be s*** crazy. And imagine supercharging that!!!