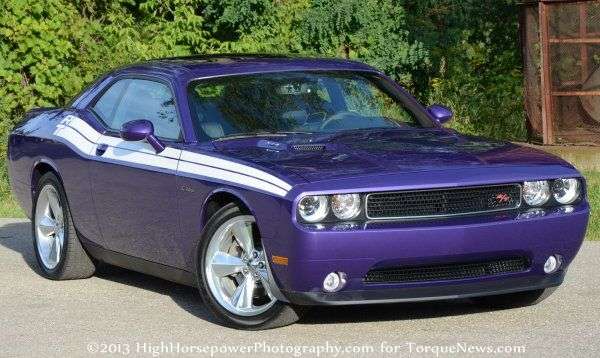 We have known for about 8 months that the next generation Dodge Challenger will debut next April at the 2014 New York Auto Show and with the recent debut of the next generation Ford Mustang – the Mopar community is buzzing about what Chrysler might do with the next Challenger to help it stay abreast with the newest pony car. After looking at the basic specifications of the three Detroit muscle cars, it is very clear what Dodge needs to do with the 2015/2016 Challenger.

Over the past few years, the Dodge Challenger has sold substantially fewer units than have the Ford Mustang or the Chevrolet Camaro. Even though the Challenger offers the least expensive V8 option with the base R/T models powered by the 5.7L Hemi V8 with 375 horsepower, that model is significantly less powerful than the Ford Mustang GT or Chevrolet Camaro SS which each offer at least 420 horsepower. Also, when you consider the fact that both the Camaro SS and Mustang GT weigh quite a bit less than the Challenger, that differential in power becomes an even bigger issue. Yes, the Challenger does allow buyers to get into a V8 American muscle car for the lowest price but that comes with a pretty substantial difference in performance.

Those numbers make it very clear that the Chrysler Group has to either make the next generation Dodge Challenger quite a bit lighter or quite a bit more powerful – all without raising the price too much. There have long been rumors that there is a far more powerful SRT version of the Challenger on the way that will pack the new Hellcat Hemi with a power output expected to be up into the 600-650hp range but that will be an elite model with an elite price…so it wont help close the sales gap any. However, should the company figure out a way to offer a similar power to weight ratio as the Mustang and Camaro – the high volume packages could prove to be much more popular with those buyers who are shopping with performance relative to price in mind rather than brand loyalty.

Tim McKenzie wrote on December 29, 2013 - 4:42pm Permalink
Excellent article, spot on. One thing you didn't mention, is the fact that so many people decide to buy these cars, despite the HP to $$ difference. I believe it is styling. I know many RT drivers, who chose to spend money making their, "good looking-- but weak car stronger." I traded my 13 RT for a 14 SRT. I did NOT like spending the extra dollars, but the SS Camaro looked to "Cartoonish," and the 5.0 Mustangs are EVERYWHERE. You can fix slow, but you can't fix ugly. Dodge owners resent the fact that the RT's do not have at least 425 HP. They do not necessarily want to equal the 5.0, but they want the same power levels. After all, the Challenger is really NOT a Pony Car. Dodge should have marketed this as a Muscle Car (think Chevelle, Super Bee, GTX, GTO, Road Runner, Charger, etc) not a Pony Car. The original Challenger was a Pony. The new version is NOT.
Jamie C wrote on December 30, 2013 - 3:32pm Permalink
Tim is spot on. Yes, ford and chevy will be faster cars but the challenger is one of the best looking cars on the road IMO. Its easy to get more HP out of a HEMI but to make a camero look as good... not so much.
Mike C wrote on January 23, 2014 - 2:15pm Permalink
Great article. I keep hearing for the reasons mentioned in the article. What nobody states is that a Challenger buyer is a Challenger buyer. We like the classic look, the size and the power. If this is discontinued Dodge, Chrysler, Fiat would lose a huge percentage of buyers. Like the 2 previous gentleman stated a Challenger owner isn't competing with the Camaro or Mustang were downright cooler.
Buddy Blake wrote on January 26, 2014 - 7:03am Permalink
Who cares about a few extra horsepower, we're not driving on race tracks. Which care turns the most heads, it's not even close...Challenger.
Natalie wrote on February 3, 2014 - 11:24am Permalink
I don't see ANY Camaro or Mustang plum crazy purples!! I love my plum RT classic. It's a fast car and looks badass! Not a better throw back car than the Challenger. Need I say more???
Kelvin Stratton wrote on May 18, 2016 - 10:52am Permalink
I just bought my new 2016 Challenger RT with Manuel transmission. I love the car. I have nothing against the Mustangs or Cameo's but in my mind the Challenger out does both in style an space. I really like to be able to open the trunk an have room to put articles in. I also like the fact that I can sit comfortably an not be squeezed inbetween the console an door panel. If I was a street racer or going to the track on the weekends then I would have considered something smaller. But with great pickup an winding the gears out on some back country road...Challenger is my best pick.