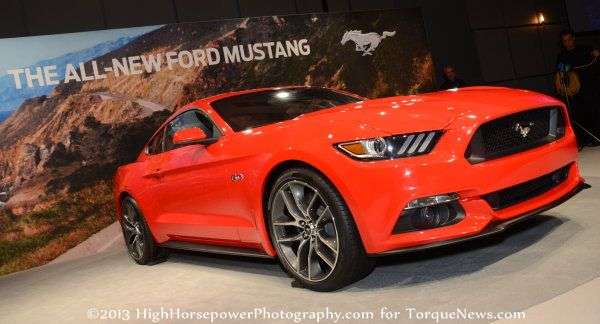 After months of speculation, spy shots, CAD images and a single teaser, the 2015 Ford Mustang was formally and finally introduced to the public at six spots around the world – and the images here are shots of the beautiful Race Red Mustang GT that debuted neat Ford’s HQ in Dearborn Michigan.
Advertisement

Over the past months (or has it been years?), we have been so fixated on the front end design of the 2015 Ford Mustang that we seemed to forget that this is an entirely new Mustang with new, fresh lines from front to back.

As expected, the front end of the new 2015 Mustang does indeed wear the Evos styling design that is shared with several other cars in the Ford lineup and while some might find that to be a little too Fusion-like – the 6th generation Mustang is way more than just a new front end.

First of all, shy of the elongated headlights, the 2015 Ford Mustang sports a great looking and super sporty front fascia that has a pair of large grille openings with some wicked looking matte black “spokes” that run from top to bottom. Flanking the lower grille is a set of circular foglights mounted in matte black bezels and when combined with the long projection headlight housings, this new Mustang has a super modern look that I love. The front end is punctuated by a chin spoiler (that I suspect is a feature of the GT package) and that adds an extra element of that high-performance look that helps to emphasize the powerful face of the 2015 Mustang.

Above that controversial front end, the 2015 Mustang GT wears a hood with a pair of distinct ridges raising up out of the hood and running towards the cowl with a set of heat extractors mounted just outside of those raised points. The hood is longer than the previous Mustang and this design gives the 2015 models a very sleek, poised-to-strike look while also following the trend of the longer front end area that has been displayed by many of the world's best-known performance cars.

Along the sides, the 2015 Ford Mustang is far more sculpted than the outgoing models with sharpened lines running along the tops of the wheel openings and another down towards the lower rocker area. The fenders are flared in a similar manner to the 2014 Mustang but designer J Mays pointed out that the track of the 2015 Mustang has been widened in the front and rear for a more aggressive stance. Finally, a black trim piece runs along the bottom of the rocker area and I suspect that this piece adds some element of aerodynamic quality while also making the car look sportier along the sides.

Also along the sides, we see the new, super curvy greenhouse that starts with a quickly sloping windshield that leads into a short roof surface that immediately begins to curve back down so quickly that there really isn't any flat portion of the roof. At the back of that short roof is a huge rear window that stretches nearly all f the way to the back of the car – stopping literally inches from the subtle, low profile rear spoiler. It might not be a fastback in the conventional sense but the design of the 2015 Mustang is every bit as close to a fastback as possible without actually being a fastback.

If it was up to me… I would call the 2015 Ford Mustang a fastback but regardless of what you call it, the silhouette of this new Mustang is strikingly sleek and while still being shaped somewhat similarly to the outgoing models, it is very clearly all new from top to bottom and front to back.

Finally we get to the back end of the 2015 Ford Mustang and this new rump is one of the most exciting features of the 6th generation pony car. At the top of the rear end, the trunk lid curls upwards slightly to help elevate the super subtle rear spoiler with a prominent ridge separating the integrated spoiler area from the taillight panel. Then there is the taillight panel…oh that beautiful taillight panel. As has been the case for decades, the 2015 Ford Mustang has three unit tail lights but for the 2015 models, each of those three lenses is raised individually for a super cool 3D design. These big, accentuated tail lights are set in a gloss black bezel that dominates the rear end with the GT logo proudly displayed in the middle of this rear blackened portion.

A simple license plate area stands between the tail light panel and the ultra-aggressive integrated lower diffuser. This two-piece diffuser has a black portion that starts just behind the rear wheels on the sides of the car and stretches around to the back end where it wraps around the dual exhaust tips and then thins out where it runs above a second portion of the diffuser that is painted the same color of the body. This gives the 2015 Mustang GT a very high end, almost supercar look with the reverse indicator set in the middle.

Aside from the new, sharper angle of the taillight panel, this backend is much of what so many previous Mustang owners have attempted to achieve through aftermarket modifications. The blackout taillight panel is a popular add-on for 1999-2014 Mustang owners and the integrated lower diffuser is both an aspect of many Mustang aftermarket body kits and some of the world’s best-known performance cars.

I could go on for hours about the styling but I will leave you by saying that the 2015 Ford Mustang is an awesome evolution from the previous generation of the fabled pony car. Change-haters be damned…the 2015 Ford Mustang is a gorgeous machine. Click on any of the thumbnails above for a closer look at more of our pictures from today’s debut of the Race Red Mustang GT and tell us whether you love or hate the new Mustang in our comment section below!

Congratulations to Ford Motor Company for building yet another awesome performance car that will surely help continue the legacy of the mighty Mustang.

John Goreham wrote on December 5, 2013 - 12:15pm Permalink
I bet Ford managed all that controversy. I say good for them! This car is great looking.
Randy Kozoris wrote on December 5, 2013 - 2:54pm Permalink
They ruined a true classic, made it look like every other grocery getter. Too bad, I have always loved the Mustang and have owned many of them, except the other Mustang II fiasco. Ford you took 50 years to ruin a distinctively different and beautiful car. Sad, Sad, Sad !!!!
Kevin Coffman wrote on December 5, 2013 - 11:12pm Permalink
Not ruined at all, and give me a break, come on, it doesn't even look like every other grocery getter, to look at it you can see the evolution of Mustang. What did you expect something compared to a McLaren P1?? The Mustang is a car that will continue to be embraced by many, plus adding more with this new version. I have a feeling this version will be very popular and sell at a brisk pace, and continue to get better as it progresses forward.
Steven wrote on December 7, 2013 - 6:49am Permalink
Back in 2010 I was trying to figure out how a Hyundai genesis could have out styled "not out performed in anyway" the outgoing version of the mustang that many people loved. I am so glad they "ruined the classic look." If it was no for this new sleek design and reimaged mustang, I never would have been caught dead in one. However due to these innovative changes, this 2015 mustang finally appears to look on pair with other high end sports cars. Keep up the good work Ford.
indio7777 wrote on December 30, 2014 - 11:31pm Permalink
This is a beautiful car and they hit a home run...looks very modern but maintains the Mustang hallmarks.
Anon wrote on December 5, 2013 - 8:19pm Permalink
Just your own opinion. Looks like a true American sports car beating overpriced euro cars in looks and performance.
Rob wrote on December 6, 2013 - 2:11pm Permalink
Absolutely awesome!. What a sleek, sexy really tough looking and obviously beautiful new version of the BEST muscle car ever! A really stunning version of the FORD MUSTANG for modern times. Ford you hit a home run. I love it and will buy one when this Mustang hits the Ford dealership. It doesn't matter if people don't like it. It's how the car move's the person who has a passion and love affair. This is an emotional love affair.
Terry wrote on December 13, 2013 - 1:46pm Permalink
I really like the looks of the new Mustang, I purchased /Ordered a 2005 Mustang GT in July 2004 and and I love that car, it has 24,000 miles on it and has been to the west coast 2-times and yellowstone 2-times, a great road car. I will plan on taking this new one for a spin and see how it performs, Thanks FORD for a Great car!!!! keep it up!
Peter Rafuse wrote on July 17, 2014 - 12:10pm Permalink
The look of the 2015 Mustang is fresh and exciting when compared to the outgoing model. My last Mustang was a 2000 Sport Coupe with the V6 . I found the V6 was easy to service and an excellent engine. The new V6 has an additional 100 horsepower which should be good enough for most of us. Being a married man I would appreciate some colors that would appeal to my wife. Top on her list would be Tiffany Blue.Ford should be reminded that Black, White and Grey are shades not colors. A selection of at least 10 real colors should be available for the new car, they should reflect the most dynamic colors from the past and some new ones. I remind FORD that color is a way we customize a car and therefore make it our own. Color reflects our individuality and taste. FORD should be aware that red is not the color of choice for everyone. The ugliest cars are Grey and for a stupid reason dealerships keep ordering grey cars. The reason given to me is that Grey does not show dirt. So all the ugly Grey cars on the road today are not showing dirt. Imagine that!! Maybe Ford should give their sales staff art lessons and hold color awareness workshops. Seriously folks even old Henry relented on the color issue.