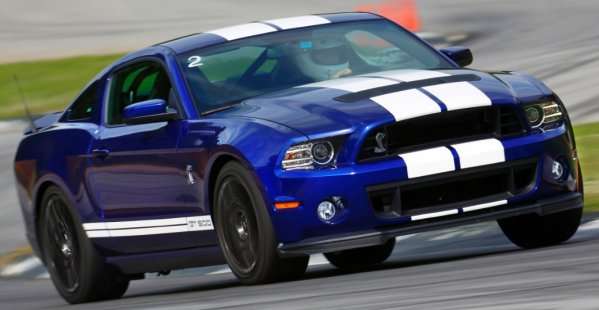 After a video surfaced showing the 2013 Ford Shelby GT500 Mustang lapping the famed Nürburgring with a lap time counter that had seemingly been added after the fact, a bigwig from Ford explaining that the company doesn’t have any plans to issue “official” lap times for any of their performance vehicles – a move which really only impacts the devout Mustang community.
Advertisement

The folks at the enthusiast forum SVTPerformnce.com were the ones responsible for publishing the video of the 2013 Ford Shelby GT500 Mustang in action on the famed German Nürburgring and we can only assume that it was also a member of that Mustang loving community who added the lap timer that suggests that the 662hp GT500 made it around the huge circuit in 7 minutes and 39.28 seconds. The folks at SVTPerformance then dig some digging around for more information on the super-Stang’s ‘Ring record.

The reply they received came from Ford's Global Performance Vehicle Chief Engineer Jamal Hameedi – a man who unquestionably would have the right answer – but for the Mustang faithful Mr. Hameedi’s reply wasn’t the good news that some might hope. Hameedi explained that Ford Motor Company doesn’t announce “official” Nurburgring track times because there is essentially no way to make sure that all of the vehicles are competing on a level playing field. Since the cars tested at the famous German track are not subject to any sort of standard inspection before making their runs, there is no way to truly verify those times as being correct or valid. This means that there is no way of making sure that the cars in action arent modified in some way to eek out better lap times and since the cars are tested by all sorts of different sources including some publications, private owners and the automakers themselves – there are often other variables that come into play. For instance, the temperature during the testing, whether or not the track is wet in some portions or even the driver’s skill can all play a massive role in lapping the huge track. Hameedi offered a shout out to Motor Trend and the German publication Auto Motor Und Sport as they both conduct their “fastest car” tests on the same day in consistent conditions with a professional driver so with those types of tests, you have a best case scenario on a very level field.

Unfortunately, Jamal Hameedi is 100% correct. Something as simple as having a better driver or more ideal weather conditions can make a huge impact over the course of a track that takes seven and a half minutes to lap and in the long run, very few people buy cars based on their lap times at the Nürburgring or anywhere else. He also points out that the 2013/2014 GT500 Mustang is a strong seller even without any published lap times at the Ring so it isn’t like it hurt Ford – or Mustang sales – for there not to be officially published Nürburgring times. In the long run, this decision has no real impact on Ford Motor Company…but it does impact their fans.

Ive been active in the Ford Mustang community for many years and of the thousands of Mustang owners Ive met, the vast majority of them have spent at least some time at the drag strip while almost none of them have ever put their Mustang to the test on any track with turns. Don’t get me wrong – there are plenty of road racers and autocrossers out there rocking Ford pony cars but in the grand scheme of things, they are the vast minority.

So why does Ford’s refusal to announce Ring times impact them? In the modern car enthusiast world, bragging rights play a major part or who is “winning”. Ford fans really don’t care if the Mustang sells more units per month than the Chevrolet Camaro but they do care about being able to say “the 2013 GT500 has 662 horsepower – what does Chevy have?” Even if a Mustang enthusiast who owns a 1986 base 4-cylinder model is arguing with a Camaro enthusiast who has never owned a Camaro, being able to brag that “your camp” is faster or stronger or better in some department is a big deal in the fast paced world of internet trash talk. General Motors fans are able to brag that the Camaro Z28 is the quickest American muscle car to ever lap the Ring and although most Camaro fans will never race on a road course, it means a lot to them to have that little edge on the competition. In refusing to report lap times from the Nürburgring, Ford might be saying “we are too good for that” but as the horsepower wars rage on at the owner level, Ford’s approach leaves their fans without any way to counter Camaro fans when they make jokes about how the Camaro is smoking fast on the Ring and the Mustang doesn’t have any official times. That certainly doesn’t help any of the age old misconceptions about Mustangs not handling well either but in the long run, Ford just doesn’t see the benefit to the company to spend the time and money coming up with official lap times.

Regardless of the reason, the fact that Ford refuses to get involved in the lap time pissing match has no negative impact on the company or on vehicle sales but it comes as a disappointing blow to enthusiasts who will have to deal with Camaro-fan trash talk well into the future. GM likely doesn’t sell many Camaro ZL1 models because it has a great lap time. They announce those numbers for the same reason as Toyota and Nissan and Chrysler – because it is important to the people who worship vehicles like the Lexus LFA, the Nissan GT-R and the SRT Viper and even in communities where none of the members own the vehicles in question – being able to brag that “your team” is the fastest is a very important piece of the modern automotive enthusiast community.

San Jose Cars E... wrote on November 29, 2013 - 3:01pm Permalink
It's not a big deal. Everyone knows it's quicker in a straight line.
John Goreham wrote on November 29, 2013 - 6:36pm Permalink
This story brings up a good point. Maybe this is a blessing in disguise. I am an enthusiast, yet I have become jaded to all the 'Ring lap time talk. These are supposedly street cars. I understand the 'Ring is technically a toll road, but it is used as a race track. I'm tired of hearing how fast all these quasi-exotic cars can go around that track. You want a race car, buy a race car. Just my two cents.