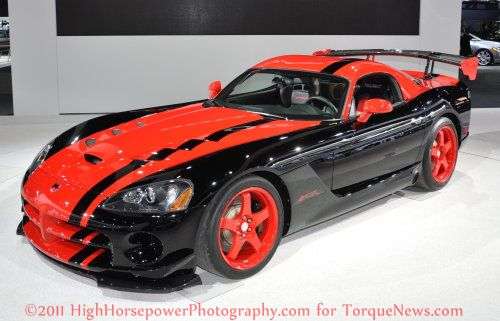 The Dodge Viper has been out of production for over a year but after watching the Chevrolet Corvette ZR1, the Porsche 911 GT2 and the Lexus LFA Nürburgring Edition bump the Viper from the top spot, Chrysler’s SRT division headed back out to the famous German race course with stunning results as the 2010 Dodge Viper ACR ran a lap of just 7:12.13 – easily putting the Viper back atop the list of the fastest production vehicles around “the ‘Ring”.
Advertisement

The Dodge Viper ACR first set its impressive record in August of 2008 and that record of 7:22.1 stood until the Porsche 911 GT2 beat it in April 2010, while it took the Chevrolet Corvette ZR1 and the Lexus LFA until this year to break the Viper’s 3 year old numbers. It took Lexus, Porsche and Chevrolet years of testing and development to best the Viper but even with Chrysler using a 2010 model that had been sitting around since production ended last year – the Viper ACR made short work of all of these numbers in running an incredible 7:12.13. This number puts the 2010 Dodge Viper ACR ahead of all major mainstream production vehicles with only the Gumpert Apollo Sport and a pair of Radical SR8 ranking better than the Viper, although it should be pointed out that both the Apollo Sport and the two Radical SR8 models are both street legal race cars that you will be hard pressed to ever see on the open road. They also both cost significantly more than the 2010 Viper ACR.

Chrysler sat by quietly as the Porsche 911 GT2 and Chevrolet Corvette ZR1 beat the Dodge Viper ACR Nürburgring time but with the Lexus LFA Nürburgring Edition raising the bar a great deal last week with their 7:14.6, it seems that the folks from SRT had enough of watching their numbers slide down the leader board. SRT took two showroom stock 2010 Dodge Viper ACR coupes, which were provided by Tomball Dodge of Tomball Texas to the Nürburgring with the intention of reclaiming their record and they did so in fantastic fashion – comfortably crushing all other production cars around the monstrous German race track even though the current Viper does not offer any of the advanced stability or traction control systems found in the LFA or Corvette ZR1.

In addition to that new record for street legal production cars set by the Viper SRT10 ACR, the Dodge Viper ACR-X reportedly hit the track as well, ripping off an awesome lap time of 7:03 according to the folks at the Viper Club of America. That time puts the Viper ACR-X third overall among non-street legal models, trailing only the Pagani Zonda R (6:47.5) and the Ferrari 599XX (6:58.16).

Unfortunately, there has been no official statement from Chrysler thus far but with Chevrolet and Lexus both offering video of their record times, we can (hopefully) expect a video soon from the SRT group showing their Viper ACR tearing around the Nürburgring in just over 7 minutes and 12 seconds. One thing is for sure – even though the Dodge Viper hasn’t seen any significant changes over the past few years, Chrysler showed yesterday that it is still one of the premier supercars in the world as it once again holds the record for the fastest street legal production car to lap the famed Nürburgring.

As soon as the official word comes from Chrysler, hopefully with some sexy video of the record setting Viper ACR run, you will find it all here on TorqueNews.com!

Note: Many sources are stating that the Viper ran a 7:12 and "some change", while Wikipedia's page on the Nürburgring is reporting that time to be a 7:12.13.

Anonymous wrote on September 15, 2011 - 6:32pm Permalink
poor chevy putting all that tax payer bailout money in their ZRnone just to have dodge pull out two old vipers without electronics and blow their doors off. give it up chuvy focus on paying that bailout money back.
Anonymous wrote on September 27, 2011 - 1:51am Permalink
You do know Chrysler used tax payer bailout money too, right? And both have paid that money back. Moron...
Anonymous wrote on September 27, 2011 - 3:57pm Permalink
well chevy boy gm has'nt paid their bailout back they just lied to you if they did why does the gov- tax payer still own gm stock. moron...
chrysler power wrote on October 15, 2011 - 2:45am Permalink
even john force runs a hemi
Anonymous wrote on October 16, 2011 - 1:10am Permalink
I doubt they were bone stock. Just managed to grab 2 showroom cars and suddenly gain 10 seconds off the old Dodge record......I don't think so. Uh, Mopar grabbed the money, too. They need to finish paying up, also.
Anonymous wrote on January 6, 2012 - 10:30pm Permalink
It was a bone stock Viper ACR (even street legal tires). They also took a Viper ACR X which is not street legal and it ran a 7:08. There is a detailed article in Sept/Oct issue of Viper magazine. There is also a video I saw in December, but I don't think it has been released yet. The first time out, the record was beat on the third lap so they stopped. The second time out they used the same driver who was now more familiar with the car (he's a Nurenburgring expert). Like I said, if you are concerned about technicalities or proving it wrong, there are plenty of articles out there detailing the event. Good luck.
Pummers wrote on February 8, 2012 - 11:41pm Permalink
If you knew anything about the Viper, you'd realize that the 2008 and 2010 models aren't identical. The 2010 models had revised 5th gear and rear wing sculpting that allowed it to accelerate even harder to top speed. Added to that an experienced driver around the 'ring and you can easily see where the 10 seconds came from.
Dale wrote on August 5, 2014 - 3:43pm Permalink
Hey viper fans, how's the sales on your awesome sports car going? I'll answer that , terrible! How's the corvette selling? Awesome! Hows the racing in the Lemans series going for viper? Again terrible! For Corvette awesome! Leading the series! Your viper sounds like a greyhound bus with its v-10 truck motor and the way sales are going it will cease to exist very soon! This will never happen to the Corvette ! People vote with their money and viper loseing that race bad to the Corvette!

LG's New EV Battery Plant Is a Welcome News for Tesla
Tesla Giga Berlin's New Hurdle: It's Not Only the Gov't, but Now Tesla Itself
END_OF_DOCUMENT_TOKEN_TO_BE_REPLACED