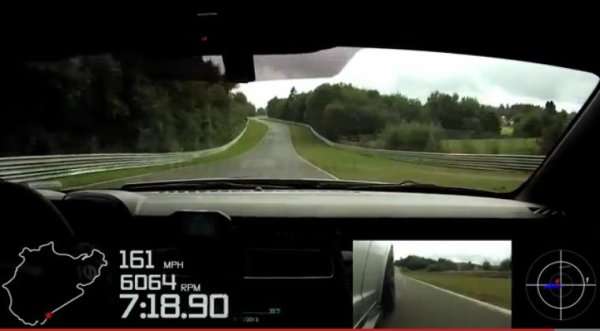 General Motors has just announced the results of their team’s testing session with the 2014 Chevrolet Camaro Z/28 at the Nürburgring and with a time of 7:37.47 – making the new Z/28 the fastest American muscle car around the famous German track and what makes this time even more impressive is the fact that this record lap was achieved in the rain.
Advertisement

When the 2014 Chevrolet Camaro Z/28 was introduced back in April, it was being billed as the most track capable Camaro ever and a claim like that comes with the expectations of the car in question putting down great numbers on a race track. As is the case with pretty much every other performance car sold in the world, General Motors chose the German Nürburgring as their proving grounds to show off the extreme levels of performance offered by the 2014 Camaro Z/28 and even though the team faced crappy, rainy conditions – the new Z/28 was able to put down the best Ring time ever by a Camaro. That time of 7:37.47 was also the best time turned in by an American muscle car and the only American cars that have ever turned in a better time than 7:37 were the Dodge Viper and the Chevrolet Corvette.

“Our cars' performance and capability have advanced tremendously in the past 20 years, which required us to continually improve the parameters of the 24-Hour Test," said Wayne McConnell, director of global vehicle performance. "Today’s test pushes the car harder than the vast majority of customers ever will. As a result, when we call a car ‘track capable’ we are confident that it will perform reliably and consistently for our customers.”

Before tackling the Nürburgring with the 2014 Chevrolet Camaro Z/28, the fastest American muscle car to lap The Ring was the Chevrolet Camaro ZL1, which turned in a time of 7:41.27…almost four seconds slower than the new Z/28 even though the ZL1 has considerably more power. However, the various weight reduction efforts allow the Z/28 to hit the track some 300 pounds lighter than the ZL1 and when combined with the many other track-ready features of the new Z/28 – it has comfortably proven itself as the fastest muscle car to ever lap the Nürburgring.

In turning in a record time of 7:37.47, the 2014 Chevrolet Camaro Z/28 is comfortably the best performing American muscle car to ever hit that track but when you look at some of the cars that turned in comparable times on the Nürburgring, you really get a good picture at just how impressive that time really is. Below is a list of some of the vehicles that the 2014 Z/28 has effectively beaten around the Ring in terms of recorded laps. It should be noted that in the case of the Corvette ZR1, the Nissan GT-R and the Ferrari 458 Italia, these models turned in quicker times while being tested by other sources but these numbers help to show the kind of company the new Z/28 joins in terms of capabilities.

Most importantly, this record Nürburgring lap time set by the 2014 Chevrolet Camaro Z/28 was achieved while portions of the track were soaked with rain. Towards the event of the video below, you can see that it is raining quite hard and that causes some obvious traction issues while cornering and accelerating.

"One of the challenges of testing at the 'Ring is that the track is so long that conditions can change radically in a single lap," said Al Oppenheiser, Camaro chief engineer. "Adam Dean, the development driver for Z/28, did a heroic job driving in deteriorating conditions. Based on telemetry data from our test sessions, we know the Z/28 can be as much as six seconds faster on a dry track."

If GM should go back to the Nurburgring with the new Camaro Z/28 and actually shave 6 seconds from their current record time, that would give the 2014 Z a best time in the area of 7:31. That time would put the newest Z/28 in the same discussions as the Porsche Carrera GT and a variety of previous generation (2008) Porsche 911 GT2 race cars while also being faster at the Ring than the infamous Koenigsegg CCR and CCX supercars.

Speculation aside, even while racing in the rain, the 2014 Chevrolet Camaro Z/28 has clearly staked its claim as being not just the best performing Camaro of all time but also the best performing American muscle car ever and the video below offers a great look at the new Z/28 as GM test driver Adam Dean rips through the 12+ mile road course. Crank up your speakers (as the LS7 engine under the hood of the Z/28 sounds terrific) and enjoy!