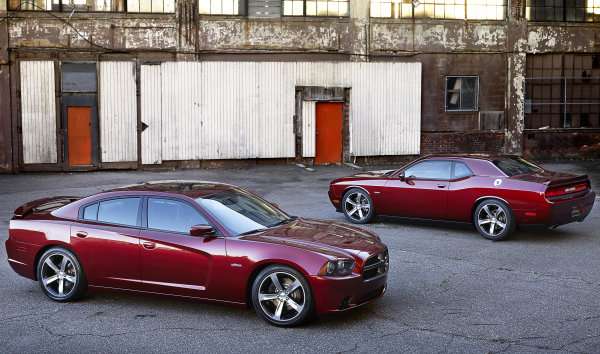 The Dodge brand will turn 100 years old in 2014 and to commemorate this incredible milestone, the Dodge Charger and Challenger will both be available with a special 100th anniversary edition package that will be offered in limited quantities for the 2014 model year.
Advertisement

The 100th anniversary package is available on the Charger and Challenger in both SXT Plus and R/T Plus which means that buyers can get this great looking appearance package with either the 3.6L Pentastar V6 or the 5.7L Hemi V8 and for Challenger R/T buyers, there is also the decision to pick between an automatic or manual transmission.

The 2014 Dodge Charger and Challenger in the SXT Plus R/T Plus are very well appointed trimlines so the 100th Anniversary Edition package packs pretty much every standard interior amenity available in these two Dodge cars including the 8.4” infotainment touchscreen and a premium sound system with Charger owners getting a Beats By Dre system while Challenger owners get a Boston Acoustics system. The flat-bottomed steering wheel from the SRT versions of the Charger and Challenger has been added and those vehicles with the automatic transmission also get die cast shift paddles mounted to this sporty steering wheel.

In addition to the uniquely appointed vehicle, those buyers who opt for the limited edition 2014 Dodge Charger or Challenger 100th Anniversary Edition get a special owner’s package that explains the 100th Anniversary package along with a book that looks at the last 100 years of the Dodge brand. Chrysler has not announced how many of these limited edition models will be produced but they have announced the pricing.

Click any of the thumbnails above for a closer look at the 100th Anniversary Edition Dodge Charger and Dodge Challenger.

Disclaimer: I am well aware that there are plenty of people out there who read this and were appalled by my suggestion that the Dodge Charger is a muscle car but considering that the Charger has everything that a classic muscle car had including some serious performance capabilities – I refuse to not consider the Charger a muscle car simply because it has two extra doors.

Bill Schmidt wrote on May 7, 2017 - 3:51am Permalink
I have recently bought the 100th RT / Challenger in a silver / black interior. My question is, how many of these cars were made in production?