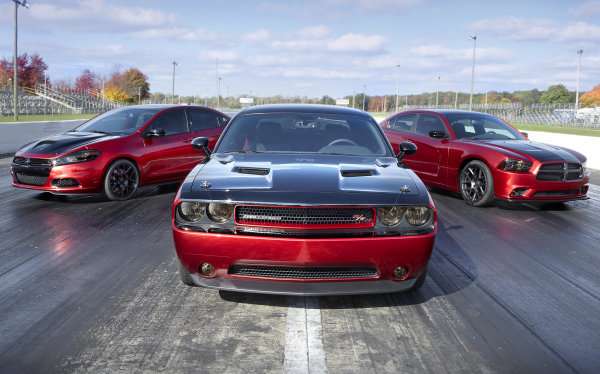 The 2013 SEMA Show has been a big one for the Chrysler Group and among the biggest bits of Mopar related news is the introduction of the new Scat Pack – a program that offers Dodge Charger, Challenger and Dart owners special high performance packages that improve the performance capabilities of each car.
Advertisement

The new Dodge Scat Pack follows in the tradition of the original Scat Pack back in the 1970s with a lineup that includes the Dodge Charger R/T, the Dodge Challenger R/T and the Dodge Dart GT (or other models equipped with the 2.4L naturally aspirated Tigershark engine. To draw attention to these new Scat Pack equipped vehicles, the Mopar display at the 2013 SEMA Show has all three vehicles decked out in a gorgeous deep metallic red and black two tone paint job complete with custom wheels and some body bits to make these proper SEMA show cars. However, the real story on the cars shown here is what we really cannot see with the underhood modifications and additional power of the Scat Pack program.

“The Scat Pack performance philosophy has always been the core of Dodge DNA,” said Tim Kuniskis, President and CEO, Dodge Brand. “Bringing back factory stage kits allows Dodge enthusiasts to extract the maximum performance from their vehicles without the fear and guesswork typically associated with modifying late-model vehicles.”

For those Scat Pack members who own a Dodge Charger R/T or Dodge Challenger R/T, Mopar has put together three unique stage kits that offering varying levels for the 5.7L Hemi V8. Stage 1 adds a Mopar cold air intake, a Mopar full cat back exhaust system and an engine calibration that is designed to optimize the power output of the Hemi fitted with those items. Stage 2 begins with the features of Stage 1 and adds on a Mopar Performance camshaft package along with another unique engine calibration. Stage 3 includes the intake and exhaust from Stage 1 and the camshaft from Stage 2 but adds CNC ported and polished cylinder heads along with a set of high flowing exhaust headers along with yet another engine tune that makes the most of these modifications. Finally, each of the stage kits for the Scat Pack equipped Charger and Challenger features a hard window badge depicting the sporty little Scat Pack Bee with a red number indicating the stage chosen.

The new Scat Pack program takes a slightly different approach with the Dodge Dart sedan, focusing more on handling than overall power output. Stage 1 adds a Mopar cold air intake, a Mopar short throw shifter and a Mopar performance brake package that features slotted rotors and high friction brake pads. Stage 2 for the Dart builds on Stage 1, adding a Mopar cat back exhaust system and a unique engine tune that allows the 2.4L Tigershark engine to make the most of the increased intake and exhaust air flow. Stage 3 includes most of the goodies from stages 1 and 2 but the Mopar performance brake kit from Stage 1 is replaced by a Mopar big brake package that includes pads, rotors and calipers. Stage 3 also adds an adjustable performance suspension package including upgraded front and rear sway bars. As is the case with the Hemi powered Scat Pack cars, the Dart stage kits come with a hard window badge displaying the performance level.

“The new Scat Package kits reinforce our commitment to the performance arena,” said Pietro Gorlier, President and CEO of Mopar, Chrysler Group LLC’s service, parts and customer-care brand. “With multiple kits available, we can suit the performance upgrade needs of our owners.”

In addition to the items listed in the stage kits above, the Mopar division is currently working on a handful of “ala carte” items including more braking and suspension items for all three vehicles along with a new remote controlled electric side exit exhaust system. Known better to many as a cutout exhaust system, this high performance option can open channels in the system to allow the exhaust flow go through tips mounted in front of the rear wheels rather than through the mufflers and out the back of the car. This adds some power through the increased exhaust flow but more importantly – all three of these cars sound absolutely amazing with the cutouts open. These exhaust systems are only concept products right now but in speaking with some folks from Mopar, this exhaust setup seems almost guaranteed to become available in the near future.

The Scat Pack performance kits for the Dodge Charger, Challenger and Dart are expected to hit the virtual retail shelves in the spring of 2014 and pricing has not yet been announced. To show how much of a difference the new Scat Pack setup makes on the Dodge Challenger, Mopar has issued the video below showing a stock Challenger R/T Classic against a similar car equipped with all of the Scat Pack stage kits. Enjoy!