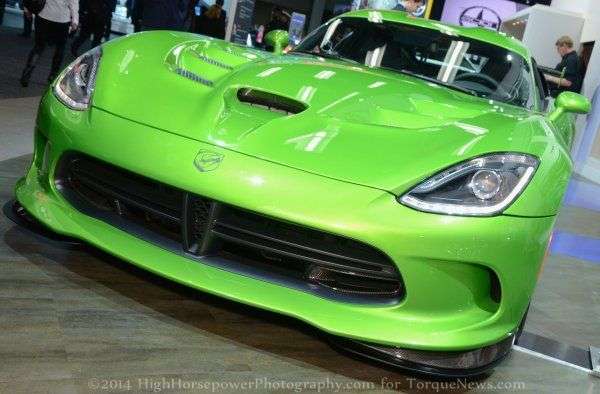 The news that the Chrysler Group is discontinuing the SRT brand has lead to a great many reports of the Street and Racing Technology branch being “dead” and while things are certainly changing a great deal within the company structure – the SRT division is alive and well with a collection of new models set to hit the market in the next five years.
Advertisement

The biggest news from the 2014 Chrysler Group 5-year plan was that the SRT brand was being folded into the Dodge brand, meaning that the SRT Viper would return to being the Dodge Viper. It seems as though a great many publications stopped reading at that point, as they were quick to report that “SRT is dead”. Former SRT boss Ralph Gilles was quick to take to the Twitterverse to proclaim that SRT was alive and well, even though it would no longer exist as a standalone brand. Many people seem to forget that Chrysler’s Street and Racing Technology (SRT) division began as a performance branch that took models from the other Chrysler Group brands and infused a hefty dose of high performance.

Long before the SRT brand existed and years before the SRT Viper was introduced as the first SRT-branded model, the folks at SRT were creating high performance versions of the Dodge Charger, the Dodge Challenger, the Dodge Neon, the Dodge Viper, the Chrysler Crossfire, the Chrysler 300C, the Jeep Grand Cherokee and the Ram 1500. Back then, SRT was a trimline created by a performance division so in a return to that same approach it is clear that SRT isn’t dead – it is just returning to how the division existed when it was at its peak of popularity.

As for the future of the SRT division, things seem to be as bright as ever. Beginning in 2015, the Dodge Viper will return, but it will continue to be developed by the Street and Racing Technology arm of the company.

Arriving later this year, the SRT division will roll out their new high performance variants of the new Dodge Charger and Dodge Challenger – both of which will be powered by the SRT-developed Hellcat supercharged Hemi with power levels that could top 600hp. The Chrysler 300 SRT is being discontinued as the SRT brand is dissolved, but the uber popular Jeep Grand Cherokee SRT will continue on…hopefully packing the Hellcat Hemi in the near future. Even with little information on the future of the SRT Jeep and knowing that the SRT 300 is about to disappear, the fact that the SRT division is introducing the most powerful Mopar muscle cars of all time alongside the stunning new Viper is a pretty clear sign that SRT is just fine in the short term.

Going forward, it appears as though the Chrysler Group plans for the SRT division to keep producing high performance models through at least 2018. The new turbocharged, all wheel drive Dodge Dart SRT is expected to arrive towards the end of 2016 followed by a new (and puzzling) SRT variant of the Dodge Journey in early 2017.

The 5-year plan also includes an all-new SRT Challenger and SRT Charger coming late in 2018. There is sadly no mention of any SRT plans in the Jeep or Ram brand 5-year plan, but the current Dodge and Jeep SRT lineups combined with the plans for new SRT vehicles in 2016, 2017 and 2018 shows that while SRT might not be its own brand anymore – the Street and Racing Technology branch of the Chrysler Group will be churning out incredible American performance cars for years to come.