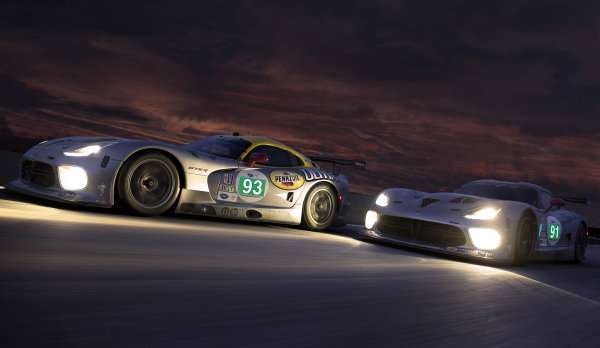 The news hit the wire late last night that the SRT Viper GTS-R race teams had declined the invitation to participate in the 2014 24 Hours of LeMans endurance race in France and while this really isnt a big deal in the grand scheme of the auto industry, this is a big deal for the racing community – particularly at the fan level.
Advertisement

The SRT Viper GTS-R made its 24 Hours of LeMans race in 2013, but they did so with lackluster results. The Vipers qualified 46th and 50th overall in the 56 car field - 10th and 11th in the LMGTE Pro Class of 12 cars. Things went a little better during the 24 hour long race as the #53 Viper that qualified 46th worked its way up to a 24th place finish overall (8th in class, 9 laps back of the class leader) while the #93 Viper went from 50th to 31st (9th in class) during the course of the legendary race. The SRT race teams were elated to have been among the 41 cars that finished the race, but things most certainly could have gone better.

The biggest story for American racing fans from the 2013 24 Hours of LeMans race was that the Chevrolet Corvette C6R teams finished 19th and 22nd (4th and 7th in class) so while neither of the American brands racing at LeMans finished on the podium – the Corvettes beat the Vipers soundly. This gave General Motors fans an important piece of trash talking ammunition, as not only did the Corvette beat the Viper on the home soil in the American LeMans Series, the Corvettes beat the Vipers on the biggest stage in the world of endurance racing. The Corvette Racing program went on to finish the 2013 American LeMans Series in the top spot so in the battle of the production-based supercar racing programs, GM continued to dominate just like it had for the past decade.

Things have gone a little differently in the 2014 endurance racing season as the SRT Viper GTS-R teams have made the most of their seat time through 2013, routinely being frontrunners during the first few races this season. More importantly, the Vipers have turned in far better finishes than the new Corvette C7R race cars so with General Motors announcing a few weeks ago that they would be sending two cars to LeMans for the 2014 race – it seemed like we might see the Vipers hand out the same beating to the Corvettes in France that we saw in Daytona and Sebring. The announcement that the Vipers would not be making the trip to LeMans for the 2014 running of the historic 24 hour race kills the hopes of Chrysler race fans who expected to see the Viper GTS-R teams pound the Corvette C7R in the biggest endurance race of them all.

The reports that the SRT Viper GTS-R teams would not be racing at the 24 Hours of LeMans race don’t come with any real explanation, simply citing that SRT CEO Ralph Gilles has commented that they are focusing on their American racing program. That is all well and good, but endurance racing is one of the few motorsports that is truly run on a global level. Winning at the TUDOR United SportsCar Championship level (formerly known as the American LeMans Series) would undoubtedly be a big deal for the SRT Viper GTS-R teams, but declining the invite to race at LeMans will be another piece of ammunition for GM racing fans across the social networks and enthusiast community forums.

The decision to keep the SRT Viper GTS-R race cars home during the 2014 24 Hours of LeMans race in France won’t have any real impact on Viper sales or the Viper racing program. I don’t really buy into the suggestion that having the SRT Viper GTS-R participating in the world of endurance racing helps Viper sales any more than having the Dodge Avenger participate in the NHRA Pro Stock ranks help to improve Avenger sales. People who can afford to buy a $120,000 Viper aren’t going to see one racing on television and think “Oh…that car is pretty neat. I think that I will go buy one tomorrow”. The same goes for the Chevrolet Corvette – I don’t think that winning American LeMans Series races in 2013 helped to spur Corvette sales – so not sending the Viper to LeMans this year isn’t going to hurt Viper sales. Not racing in LeMans won’t have any impact of the bottom line for Chrysler or for the Viper Racing program. If anything, not spending the money to go to France to race will improve the racing teams’ financial situation so they will have more resources to try to win the TUDOR championship.

The only place this decision has a negative impact is in the ongoing horsepower war being waged at race tracks and shadowy parking lots around the US…and on the internet, of course. The enthusiast world is all about trash talk, both about whose car is faster and about which favorite brand is doing better in the world of racing. Ford Mustang owners might not ever drag race and while John Force’s Mustang is a far cry from any street driven Mustang – Mustang owners brag about a Mustang winning races and championships in the NHRA. Corvette owners are very unlikely to do any endurance racing and I would imagine that many Corvette owners cannot name more than one Corvette Racing driver, but most Corvette owners and fans know that their favorite American sports cars are dominant (or have been) in the world of endurance racing.

In the fast paced world of automotive trash talk, having the Chevrolet Corvette C6R beat the SRT Viper in 2013 at the 24 Hours of LeMans race was a big deal. Having the Vipers not even show up to LeMans after a strong start to the season will serve as an even bigger shot against devout Chrysler, SRT and Viper racing fans by those who cheer for the crossed flags of the Corvette.

Of course, Corvette Racing fans mocking SRT Viper racing fans for the Vipers not showing up at LeMans won’t last all that long if the Vipers continue finishing better than the Corvette C7R in the TUDOR United SportsCar Championship. However, this decision comes as a very disappointing surprise to those racing fans who had planned on seeing the Vipers continue to beat the Corvettes at the 2014 24 Hours of LeMans race. It won’t have any impact on the automaker but this decision comes as a devastating piece of news for loyal Mopar racing fans. It really isn’t a big deal in the automotive industry or even in the racing world, but this is a very big deal to those fans of the Viper and Corvette teams.