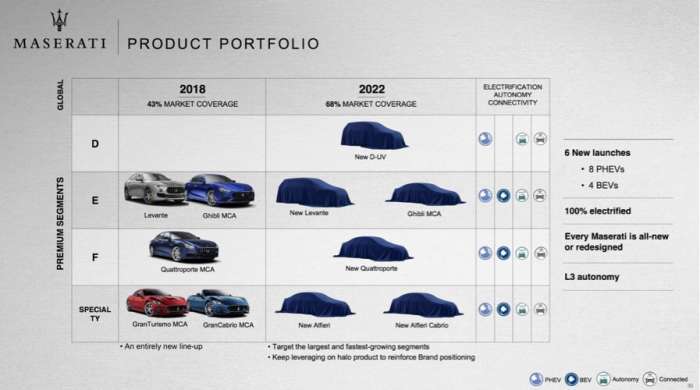 Sergio Marchionne, CEO of FCA Chrysler laid out a 5 Year Plan to investors in Italy last month that will be his swan song before leaving in April 2019. Investors were eager to know what his plans were to electrify the entire portfolio. He gave few details other than throwing money and some numbers. But this week he leaves it to his minions at Maserati and Alfa Romeo to hash the details as to how the Ítalo-American auto company will become electrified.
Advertisement

Maserati and Alfa Romeo, now one combined division, laid out a plan to electrify the entire lineup. With the Marchionne 5 Year and the luxury performance brands specifics:

-$10 billion in EV development thru 2022
-It’s all about Jeep, Ram, Maserati, and Alfa Romeo
-Phase out of methane and diesels
-By 2021 Jeep will have 14 electrified and 4 BEVs
-Seeing how successful SRT is to Dodge, they’re making electrification performance oriented.
-Maserati, hit hard by Tesla rolls out Maserati Blue, a BEV for each model
-Fiat expands 500e with a wagon

The Problem Starts on Top

It’s no big secret that Sergio Marchionne spent the last 10 years or so grappling with electric cars. He clearly didn’t like them, didn’t think they could ever be profitable, so he asked the public not to buy his compliance car the Fiat 500e because it cost $16,000 a unit to develop then he said $20,000 per unit and he said he’s selling it at a loss, thinks that most of the global electric sources are generated by fossil fuels, avowed there would never be an electrified Ferrari (there will be one), and therefore thought electrified cars were a bad idea. And he would go to auto shows, press and corporate conferences, conventions, shareholder and board meetings, even college campuses to tell the poor college kids don’t get your hopes up about electric cars.

Let’s be clear, FCA Chrysler did not intend to electrify. It didn’t want to electrify, and they’re only electrifying because they had to. That’s why they procrastinated for so long. Everyone else has something in the showroom to show where they’ve been spending money and effort on for some kind of in-the-future development, thank God Chrysler has the cash cow Pacifica van hooked with Alphabet’s Waymo’s AV equipment. And it so happens to also come in PHEV!

The EV Plan: the Execution

Unlike GM, which after they saw the writing on the wall under the leadership of Mary Barra, embraced the EV revolution and threw in autonomous cars with it, to give the company a roadmap to all-electric. Wow, they’ve come a long way since Roger Smith and EV1. Mary even had papers filed with the US Department of Transportation to next year begin manufacturing the first ever all electric fully autonomous Level 5 car in the world. No steering or pedals please!! She clearly wants it to be a GM car God bless her. GM has a goal as they electrify, the regulation oriented FCA plan targets rules in which they require a specific emissions standard for a particular region. So they’re giving what’s needed electrics to parts of the world that are requiring it, and no more. And they’re killing their methane and diesel programs to Marchionne’s chagrin.

The Global Markets and Pacifica Helps

So each of FCA’s markets around the world including the US and China get a combination of gas, various hybrids, and all out BEVs to meet regulations. Pacifica will be used as a model for PHEV conversion for Jeep, Ram, Maserati, and Fiat. Alphabet recently ordered 62,000 additional Pacificas, so that’s why you can’t buy one if you can’t find a new one. And by the way, FCA says they are working with Waymo to transfer the AV technology to put it into a FCA Chrysler passenger car product for retail consumer use.

The Problem with Maserati

If anything, and for this I give FCA credit for taking action, they got sick and tired of sick and tired of Maserati losing tons of money ever since the Tesla Revolution started. It would make sense old Maserati customers would bolt, no pun, to try a Tesla, since for example, the Model S looks like it was designed to be a Maserati killer, in an electric kind of way. An appropriate Maserati vehicle response was required, and years in the making to finally come soon for a Maserati EV to apparently compete head on with Tesla.

The Global Strategy: Take on Tesla, and Expand China

“Everything gets electrified. Look at our product portfolio and you see we’re going after Tesla.” Tim Kuniskis, Head of Alfa Romeo and Maserati told NBCNews.

But the wait was agonizing to wonder if they contemplated putting it off for another year? And so on? So, Maserati’s “Maserati Blue” Program electrifies four cars including the new gen flagship Quattroporte, also the full sized bespoke by order SUV Levante, and the all new all BEV Alfieri, most likely a coupe first, then a sedan, and all target both Tesla and China.

So the 5 Year Plan costs $10.5 billion, through 2022 for 30 models and four brands worldwide. Heavy emphasis for China with Maserati and Alfa. The execution is regulatory based, only where needed, what they require, and no more. The strategy however, is performance based, and this is where it gets interesting to see that somewhere Chrysler gets it. If you can’t sell an electric car based on economy or ecology, then remember Jay Leno’s adage: “horsepower sells cars, and torque wins races.” Apparently Chrysler paid attention to the success of their steroid SRT program to see the cash cows of Challenger SRTs and Hellcats, to make their electric program performance oriented as well. So most of these cars will sit at the top of their line with the most horsepower or better performance, in most cases. And if there’s a hybrid or BEV version that has more gusto and the customer is contemplating, sales will push the vehicle to the customer.

Jeep, the Holy Grail of FCA and the Automotive World frankly, gets 14 electrified vehicles in the 5 years, and four of which will be BEV. By 2021 every Jeep model will have some kind of electrified option.

Final Thoughts: So What Happened?

So welcome to the party FCA Chrysler, we’re all wondering what took you so long, but glad you’re here. You see, you’re supposed to be the car company that offers something that’s different from at least the other main two. But when it comes to electricity when I mean alternative, I didn’t mean hardly if any at all.

You wrote the book on what a minivan is, that your two domestic competitors struggle to make a decent one for decades still, and even today, everyone’s trying to outmake a minivan compared to yours. Instead of a compact sized muscle car you can barely get into and/or see through/out of, you offer a full sized one with a decent back seat. Instead of a full/mid sized sedan one kept canceling, resurrecting and renaming, and then canceling again last time forever, you offer the same full sized cars that have been around for two decades, hasn’t changed really, and goodness, both have the same name when they started! And one of them is almost as fast as a Tesla! Not quite!

So what happened with your electric cars? Your electric portfolio leaves much to be desired but understandable when you’re not motivated. But now this is about more than making compliance cars to make the government and advocates happy, this is about making electric cars for a world market that demands them, starting with finicky luxury customers, so you can survive.

So whatever the hell that was, the last few years of slow poke EV proliferation, you now need to step up and rise to the occasion to deliver, compete, and make a profit somehow. Because if you don’t, not only will you once again be in that same situation like you were in 2009, selling gas cars to go belly up, but now you can also be in Tesla’s predicament in 2018 trying to sell electric cars to burn through cash, to then have two pathways to failure making and selling all these cars, if you're not careful. It’s all up to you now.`

What do you think of FCA Chrysler’s 5 Year EV Plan? More Brown than Green? Will FCA Chrysler sell these Jeeps, Maseratis, and Alfas like hotcakes? Let us know what you think in the comments section below.