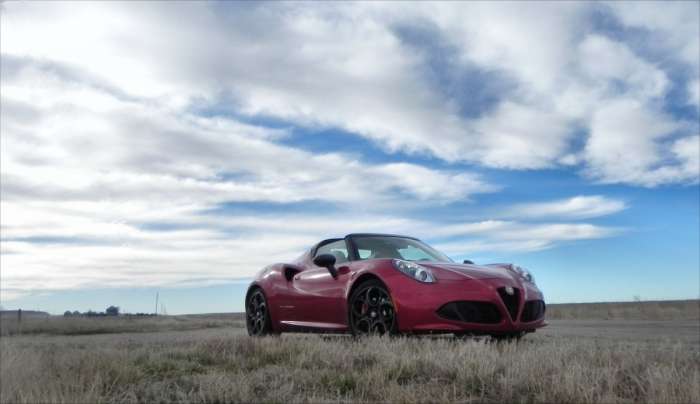 There is nothing more appealing than something that knows exactly what it wants and what its purpose is. This applies to people, places, and things. A person who knows exactly what they want is rare and a car that knows its exact purpose and that is built towards that purpose with single-minded focus.. is a gem.
Advertisement

One of the best parts of being an automotive journalist with any merit is the opportunity to drive cars. A lot of them. In 2015, I drove 85 vehicles as press loans from manufacturers. That was on top of vehicles driven at events. In 2015, I drove pickup trucks, vans, sedans, coupes, muscle cars, sports cars, and more. Although I love the everyday, the extraordinary is rarely found in the parking lot at Target. For me, the most memorable cars in 2015 were of the sporting variety. This year, I drove sports cars with names like Hellcat, Jaguar, STI, Stingray, and more. Of those, the Alfa Romeo 4C stood out the most, despite being one of the most diminutive.

Like John Goreham in his Miata pick yesterday, I found the 4C to be so focused on its prime directive that it was a truly refreshing joy to drive. Sure, crossovers and trucks and the like are great and are the everyday cars that each of us ultimately puts our money into, but the Alfa 4C was a once in a lifetime car that will go on the memory shelf alongside other rare and beautiful vehicles I’ve driven like the BMW i8 from last year and the 1965 Dodge Dart GT from the year before.

The Alfa Romeo 4C is a simple, but beautiful car. It’s a two-seat sports car in both a coupe and semi-convertible (Spider) option. I drove the latter. It’s a tiny little car whose size is comparable to everyday objects like go carts and riding lawnmowers and whose weight is so featherish that there are breeds of horse that routinely outweigh the little 4C. These might sound like negatives, but these attributes of smallness are actually strengths in the Alfa 4C.

The small wheelbase of the 4C means that it’s immediately maneuverable and capable of cornering feats few others can attempt. It’s short stature means that the 4C stays low to the road and displaces little air as it powers along. Its light weight means that the Alfa Romeo doesn’t need a lot of muscle to push it along with a quickness and speed others require far more cubic inches to match.

In short (no pun intended), the tiny Alfa Romeo 4C has all of the physical attributes of a welterweight fighter in his prime. It’s small, fast, nimble, and powerful.

Powering this little car is a beautiful 1.7-liter four-cylinder engine that’s been carefully turbocharged to 237 horsepower and 258 pound-feet of torque, both of which come at relatively low RPM rates. The mid-mounted engine powers the rear wheels through an automated clutch manual transmission that connects to an electronically-controlled rear differential. This little powerplant is packed into a carbon fiber chassis sitting on aluminum suspension points.

Pressing the accelerator from a standstill results in sixty miles per hour in about four seconds. All while emitting some achingly beautiful exhaust notes that vibrate into a cabin whose insulation against noise, vibration and harshness is at absolute zero.

Everything about the Alfa Romeo 4C is focused on putting all of that power down to the road and giving the driver supreme control over the car in straights and curves. There is so much control, in fact, that the 4C remains, in my experience, one of the most maneuverable cars at speed that I’ve ever driven. The 4C can turn hard 90-degree corners at six and seven miles an hour better than even the most well-tuned sports cars I’ve driven; which include the Jaguar F-TYPE, mind you.

As a consequence of having that much excellence in performance, the 4C becomes very intimidating for many. The lack of power steering, absence of all but the most basic of motoring necessities, and the thrillingly harsh ride and throaty throttle response mean that a lot of people would find the 4C to be an object of fear. This despite its beautiful exterior and exotic appeal.

To be afraid of the Alfa because of its intense sporting focus is to misunderstand the car. This is no daily driver meant to get you to and from the office. It’s a single-minded race car. Unlike the soccer mom crossover that can haul the team to practice, make a stop at Home Depot for supplies, and carry a wedding cake without tipping it, the Alfa Romeo 4C isn’t a multi-tool with wheels. It’s a single-minded, straight blade with a full tang and no rubber grip. It has one purpose and one purpose only. I suggest you grip it, feel the 4C’s raw power, and thrust it forward towards the guts of any roadway you wish to conquer.

LG's New EV Battery Plant Is a Welcome News for Tesla
Tesla Giga Berlin's New Hurdle: It's Not Only the Gov't, but Now Tesla Itself
END_OF_DOCUMENT_TOKEN_TO_BE_REPLACED