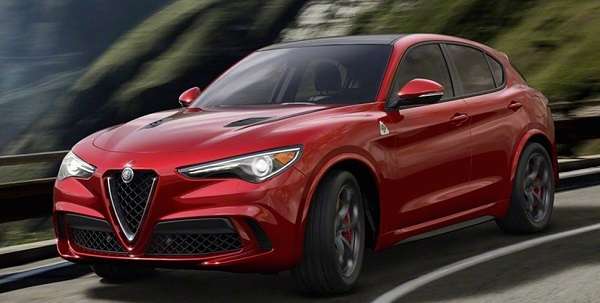 Fiat Chrysler Automobiles is boasting that the new 2018 Alfa Romeo SUV Stelvio will have 505 horsepower and go from 0-60 in Just 3.9 Seconds. It was unveiled today at the Los Angeles auto show.
Advertisement

Fiat Chrysler CEO Sergio Marchionne has said repeatedly that he intends to make the Alfa Romeo brand a contender in the automotive arena again. The 2018 Alfa Romeo Stelvio SUV may be the vehicle that will drive any resurgence the brand may have.

The 2018 Alfa Romeo Stelvio SUV was unveiled today at the Los Angeles auto show. It will start being available in the U.S. in 2017. So far, reaction to the two Alfa Romeo models available in America has been lukewarm at best. Consumers haven’t rushed to buy either the 4C, 4C Spider or the Giulia sedan.

The 2018 Stelvio however may stir some excitement in the hot premium, SUV market. According to FCA, the Stelvio Quadrifoglio , its “halo” model will roar into dealerships with “best-in-class 505 horsepower, powering it from 0-60 mph in 3.9 seconds and a top speed of 177 mph.”

Reid Bigland, the head of Alfa Romeo, says the Stelvio is named after the Stelvio Pass, one of the great driving roads in the Italian Alps. Bigland says the new SUV sets the benchmark for luxury and handling. “Stelvio is uniquely engineered to challenge two-door sports cars on the track, without sacrificing any of the characteristics you would expect from a premium SUV, resulting in the perfect mix of high performance, capability and Italian design.”

Premium SUVs however, are a different story. Porsche, BMW and Mercedes have been very successful with SUVs. Jaguar has just entered the luxury SUV market.

Along with the 2018 Alfa Romeo Stelvio Quadrifoglio, there will be two less powerful models, The Stelvio and the Stelvio Ti. According to FCA, “Stelvio and Stelvio Ti models feature an all-new, all-aluminum, 2.0-liter, direct-injection turbo engine delivering a class-leading, standard 280 horsepower and 306 lb.-ft. of torque, allowing it to achieve a top speed of 144 mph.”

All of the Stelvio models will feature what they are calling the “intelligent Q4 all-wheel-drive system which supposedly delivers better traction and performance capability, because it can transfer up to 60 percent of the engine’s torque to the front axle.

The 2018 Alfa Romeo Stelvio will be built at the Cassino plant in Frosinone, Italy. It will be built on the same platform as the Giulia sedan.It will be available in 13 colors.