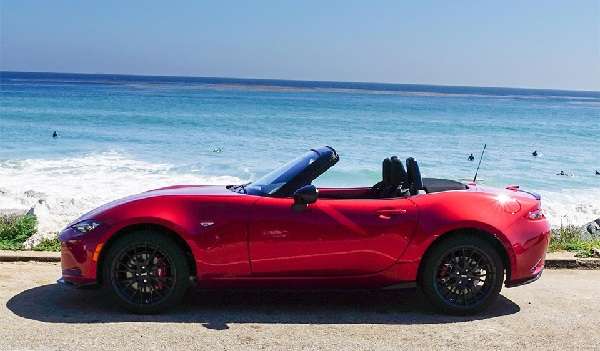 Here’s why the new Mazda Miata beat the BMW i8 and Alfa 4C to earn this writer’s vote.
Advertisement

We have the best jobs in the world. Not only do we get to do week-long tests of vehicles, but we also get invited to events where we can sample vehicles in their element. Case in point; Driving a 2016 Mazda Miata up and down mountain roads, around tight corners, and through one-lane wooded roads with a 55 mph speed limit in New York State. It is my contention, that of all the new cars that came out in the past year none is as good as the Mazda Miata at completing its mission. However, here are my runner ups before I get all emotional about the Miata.

The 2016 Honda Accord V6 deserves its props. Fast, comfortable, efficient, good-looking (for its class) and an insane value at $34K fully loaded, there is no better overall sedan in the world in my opinion. This is a car that you love to drive every time you’re in it. It also has the best autopilot system on the market (LKAS).

The Jeep Cherokee Latitude, True North Edition, V6 knocked my socks off. It was pretty much the perfect crossover. The week I had it, it snowed four feet (4’). It was better in the snow on its all-season Firestone Destination tires than my AWD Highlander on Blizzaks. It did everything right, and I loved it. That said, Jeep needs to stop being last in quality. Sorry, but the ownership experience matters too.

The BMW i8 ($145K) and the Alfa Romeo 4c ($75K) were both great at drawing crowds and for general hooliganism. However, neither was particularly fast or practical to get in or out of. My feeling is that both would be great fourth cars, but I’d probably not drive them much if I actually owned one once the honeymoon period was over.

Which brings me back to why the Miata is so special. I owned an NC (3rd generation) MX-5 Miata, and I was apprehensive that the inherent awesomeness of that car would be screwed up by Mazda. With less power (on paper) and with smaller dimensions, my concerns were not unfounded. However, at an event, I had a couple of hours to wring out the 2016 Miata on public roads at speeds that would not result in a ticket. Having tested 50 cars and done first-drives and track events in about 25 more this year, I am comfortable saying that no car is as fun to drive on public roads in a fashion that won’t get you arrested than the Miata. Its genius is revealed when you are zinging down a country road, matching-revs and feeling like Speed Racer. While doing so, if a police car comes around the blind curve ahead, you will look at the speedo in a panic and realize you aren’t doing anything wrong. That is priceless.

The Miata’s purpose is driving pleasure. So is a Corvette’s or Viper’s but you can’t get that pleasure unless you are on a track in those cars. I did exactly that, and it was amazing, but not a single one of my friends who are not in this business have ever been on a racetrack in a Corvette or Viper. In the real world in which most readers of Torque News live, the Miata is the best car to own for Sunday drives and general top-down fun in the sun. With its new BlueTooth connectivity, navigation system, and dramatically improved audio, the Miata is also a great grand touring car now. Mazda kept the best aspects of the NC generation and added a lot of modern functionality to a car that needed it desperately.

Having owned a Miata that cost the same as a new 2016 Touring model costs, I can tell you that it can be enjoyed including depreciation and insurance for about $300 per month. If you are going to have a habit, may I suggest one with six speeds, a convertible roof, and a shocking 0-60 MPH time?