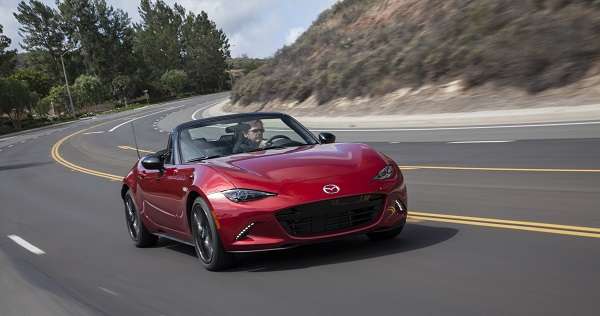 The all-new Mazda MX-5 Miata is no longer a “slow” sports car. Here is what the Mazda Miata is capable of, and some cars it can hang with in a sprint.
Advertisement

Car and Driver* recently instrument tested the all-new 2016 Mazda MX-5 Miata at the track, and the big news is the car broke the 6-second mark in the 0-60 mph sprint with a time of 5.9 seconds. A car’s 0-60 mph number is a helpful gauge of real-life quickness because in most cases, that is about as fast as one can accelerate to before the road turns, or a substantial speeding ticket becomes a possibility. Prior Miatas, like the NC generation (2006.5 through 2015) were able to do the sprint in 6.1 seconds. Those Miatas were already faster than cars like the Scion FR-S**. We thought it would be fun to look at some other sporty cars and compare their times to the $26K to $32K Mazda Miata.

2015 Chevy Camaro 2.0-liter turbo - Tie
Of course there are new Camaros that are quicker than a 2016 Mazda Miata. However, not at the Miata’s price point. To be certain of dusting the Miata one needs the V8 SS Camaro. A Convertible SS starts at $41K. For 2016, the base Camaro will be the 2.0-liter turbo with 275 hp. Chevy proudly announced in a recent press release that its new Camaro base model is expected to break the 6-second mark. A base model Camaro will cost approximately $25K to $30K. Add $5k for convertibles.

2015 Lexus IS 250 RWD - Miata Wins
The Lexus IS line is now well respected in the sports sedan world since it beat the BMW 3-Series in comparisons testing by both Car and Driver and also Road and Track. However, that is the IS 350, not the top-selling IS 250. The IS 250 with rear wheel drive runs to 60 mph in 7.7 seconds. Worse for Lexus in terms of performance is the IS 250 AWD, which takes a whopping 8.3 seconds. Yes, you are reading this right. A 2016 Mazda Miata is faster to 60 mph by 3.4 seconds than Lexus' highest volume sports sedan.

2015 BMW 320i xDrive – Miata Wins
BMW’s 3-Series is a fantastic line of cars without a bad model in the line. However, the 3-Series priced closest to the Miata is the turbocharged 320i. Starting at about $34K, the 320i runs to sixty in 7.1 seconds according to BMW. About 1.2 seconds slower than a Miata.

1976 Lamborghini Countach – Miata Wins
Just for fun, let’s throw in one of the original poster cars from the 1970s. The Lamborghini Countach debuted in 1976 with a 375 hp, V-12 engine. However, like many older supercars its performance was only good for the era. According to zeroto60times.com, the Countach’s first year lumbered to 60 mph in 6.6 seconds. About the same as a V6 Camry does today. In later years, the car got faster but never broke out of the 5-second range.

1961 Ferrari 250 California Spyder – Miata Wins
What about Cameron's dad’s car? You might remember the vintage Ferrari California Spyder in that movie that Ferris took for the day and the valets had some fun with. These cars sell for between $10 million and $20 million today. That car is/was a 6.5-second to sixty car according to numerous sources. The car in the movie wasn’t a real one by the way.

Of course, an older vintage Ferrari can’t compete with modern cars. However, the 1990 Ferrari 348 TB was only able to tie the Miata’s 5.9-second 0-60 time according to zeroto60times.com.

The New Miata will be available for sale in just a few weeks. It is fast as a Camaro, and faster than a BMW 3-series Sports sedan, Lexus’ top selling sports sedan, Ferraris costing millions, and the ultimate supercar, the Lamborghini Countach. If you are thinking of buying one and folks are still blathering on at you about it being a slow car, now you have a bit of perspective. If you can name a new U.S. market convertible sports car that is faster for the money, list it below in the comments with your source.

Elon Makes a Cybertruck Statement With an Action, But Quiet in Words
Tesla's Record Month in China: Doubled Registrations in March 2021
END_OF_DOCUMENT_TOKEN_TO_BE_REPLACED