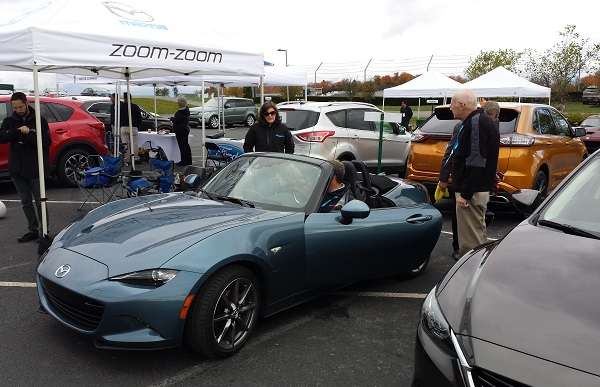 The all-new fourth generation Mazda Miata has a few big changes buyers should be aware of.
Advertisement

The 2016 Mazda Miata has been on the market now for about three full months, and all the reviews are positive. The new engine is a gem and makes more power in most of the rev band making the car feel faster. It is actually faster now too, and the Miata is the fastest convertible in the U.S. market at its price point. We spent some time in the Miata this week at an International Motor Press Assoc. gathering hosted by the fantastic Monticello Motor Club and thought buyers might like to know more about the details of the car and what owners will find thrilling and also troubling about the 2016 model.

Our 2016 Grand Touring model was a blast to drive. The first relief for this owner of a 2007, NC-generation Miata, was that the on-paper lack of power is a non-issue. The new Miata feels faster and sounds great. The fantastic vibrations the Miata had in the last generation remain and the car’s shifter now has a shorter throw and is more precise. The steering is a bit more boosted, so it feels a bit more direct. The drive, as we mentioned is fantastic.

2016 Mazda MX-5 Miata - Roof Opening and Closing
The Miata’s roof always opened easily. From the driver’s seat, undo the latch and throw it back. Done. Compared to the last model there are two big improvements here. First, when you undo the latch for the roof, the windows automatically drop a few inches which makes it work more easily. Second, while seated in the vehicle with the top stowed down, one can reach over and undo the clip that holds it down. The roof pops up a few inches and the window glass again drops. Unlike the last model, it is easy to grab now and pull closed. I was not able to do that without twisting my back or shoulder uncomfortably in the old NC generation. Kudos to Miata for improving what was already the easiest to use convertible top on the market.

Mazda Miata Power and AC
In the NC generation, the engine was robbed of significant power when one used the AC. The new 2016 Miata does not have that handicap. Cycling the AC on and off barely affects the Miata now. Those who have not owned a Miata may think that AC is not needed in a convertible, but every real owner in a warm climate knows that on long trips there are always traffic points where blasting the AC means the roof can stay down, and the driver won’t overheat while waiting for the road to open up again.

Mazda Miata Nav and Phone (BlueTooth)
My article claiming the previous Miata’s audio and infotainment was its biggest flaw drew a lot of reader comments. Some thought I was spot-on, but others dragged out the tired argument that “the sound of the engine is all I need.” Others felt an in-car, workable, hands-free phone system and Nav detracted from the car’s elemental feel. Baloney. If the car is going to have a stereo why shouldn’t it be great? It does not cost more to make a stereo great as Mazda has now proven. And if you don’t want to use the phone or Nav- don’t. The reality is, on long road trips a Nav system is the easiest way to find fantastic back roads to explore.

The new 2016 Miata’s audio system is powerful, clear and can be enjoyed at highway speeds. The new Bose system makes the old one seem even more disappointing. Phone calls now come through the headrest speakers, and one can chose to take a call while driving if one chooses to. The Nav is the same as in all Mazdas, simple to use and effective.

2016 Miata Mistakes
Mazda made a couple minor mistakes with the first year of the new generation. The volume knob and rotary mouse on the center console are too far back to be useful. The center console cupholders are also too far back, and one’s elbow hits them when they are up. They can be moved to the side of the console near the passenger seat, but then they intrude on the passenger space. Mazda will fix this in a year or two just as they did on the NC when they took away the horrible door-mounted cupholders. The dent in my left leg is almost healed now after three years from that 2006-2008 mistake.

Miata Fuel Economy
During my four years of ownership of an NC Miata the car returned 27 MPG. Reports that this new Miata is much better on fuel according to the EPA had me hopeful. However, the 2016 Miata I tested had recorded its MPG over its life as - 27 MPG. We will report our mileage again after a full week-long test.

Conclusion
Overall, the new 2016 Mazda Miata is a fantastic car. At the media event I attended writers were passing up racetrack time in supercars to drive the Miata on public roads. It was the most popular car at the event, and my time in the car took away any concerns I had as a former (and likely future) owner.

Soakee wrote on October 20, 2015 - 9:48am Permalink
My issue with the 2016 is that the tan leather is/was available only on the launch edition cars which are significantly OVER $30K, which is more than I wanted to pay. The suspension on the Sport models is too soft, thus requiring a move to the Club. But on the Club the seats are STILL black (black seats in a convertible are SCORCHERS), thus requiring new tan leather seat covers which would have added at least another $1K to the price. I am ready to trade my 2002 Miata when the tan leather seats becomes available on the Club model. Mazda, you are hereby notified.
John Goreham wrote on October 20, 2015 - 12:12pm Permalink
Excellent point about seat color in a convertible. The solar heating is a big issue. The folks that buy a black Miata and lay their arm on that body-color inside door trim are also in for a nasty surprise.
youcanrunnaked wrote on November 15, 2015 - 11:13pm Permalink
The inside top door panels are plastic and do not get hot in the sun. The "cloth" seats are a woven nylon fabric that breathes and does not get hot. (Its design resembles an Aeron chair.) Leather will always be hotter than cloth in the Summer; colder that cloth in the Winter, and with the design of the ND's chairs, even tan leather will be hotter in the sun than the black cloth.
youcanrunnaked wrote on December 8, 2015 - 8:49am Permalink
I have a 2016 Club and live in South Florida. The cloth seats are not "scorchers." They breathe well, too. IMO, the light tan leather is too light, and I am still not sold on the utility of leather in a convertible. However, if you want the tan leather, it isn't exclusive to the LE; it's available in the GT in either Jet Black or Meteor Gray.
LeRoy Dennison wrote on October 20, 2015 - 1:43pm Permalink
I have right at 2,000 on my 2016 Launch Edition Miata. My mileage to date is 34.0 and I have not been driving it easy (after I got it broken in at 700 miles). The cup holders don't bother me, but I wish the seat backs where a little wider at the shoulders or had slightly less curvature. As is, it keeps me planted in the seat, but it forces my shoulders forward a bit. I am near the top of the range height-wise (6' 1") where the cabin still works for me. If I were taller or had wider shoulders, I would not fit. Having said all that, I really love my ND LE!
John Goreham wrote on October 20, 2015 - 3:00pm Permalink
LeRoy if you would like to do a short guest story about your new ND please let us know and we will set that up. We would need at least one good image and we can help you get the story together with very little fuss. Thanks for sharing!
LeRoy Dennison wrote on October 20, 2015 - 3:35pm Permalink
John, I would love to. I have a pic that will work. Just give me some parameters (word count limit) and when I would need to have it to you. LeRoy
John Goreham wrote on October 20, 2015 - 5:54pm Permalink
Super! At the bottom of the TN site there is a "Contact" tab. If you fill in your name and e-mail and then put "Forward to John G" our administrator will send it to me tomorrow and I will reach out to you by e-mail to get it started when you are ready. Thank you.
John Green wrote on September 19, 2016 - 3:21pm Permalink
I also got my new Miata for New years, just over 6k now. its black, and i live in florida. the door armrest thing is true, as is the cupholders and volume knobs. I've learned to live with it. the tan seats are great BTW. I'm getting around 31 mpg, but im a bit ferocious with it. Here's my aggravating tidbit. the headliner is separating from the roof whenever i fold the top down, then back up. it will clip back in, sometimes, but its very awkward, and will inhibit rear visibility if it sags and i cant get it clipped back in. anyone else having this issue? solutions? tnx J
John Goreham wrote on September 19, 2016 - 5:13pm Permalink
As a former owner of an NC Miata, I will tell you that you should have the dealer fix it or replace it. Not normal, not OK. My NC headliner never did that after 4 years of ownership and I never treated it gently. It was like new on the day I traded it.