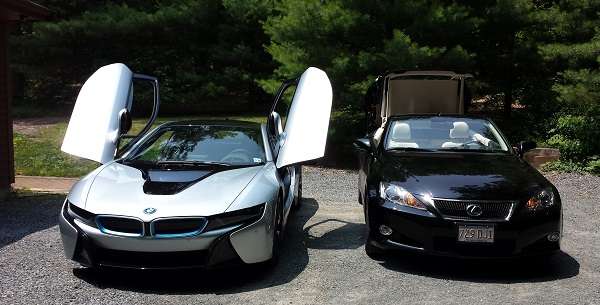 We will let you in on a secret right away. The BMW i8 is a bit better in all but one way.
Advertisement

Our local media group is blessed this week with supercars. BMW stepped up big-time and is providing its amazing i8 for part of an annual event. I am the writer tasked with getting it there in one piece. I have it for five full days, and I am also going to do as much driving as possible. The vehicle is simply astonishing. In this segment of our Torque News comparison series, we will look at which would be a better second, fun, vehicle for you. Were the question simply “which car is better” the answer would be the i8.

Weekend Cruising BMW i8 vs. Lexus IS 350C
This weekend I took the i8 out for a one-hour cruise through the some of the wealthiest towns in rural Massachusetts. Polished asphalt, no stoplights, horse farms galore, and all that jazz. While enjoying the i8 to the point of near ecstasy I passed another motorist in a Gen-3 Miata with the top down. He had his arm on the door frame, a smile on his face, and, of course, the top down. This made me think. Who was having more fun? On a glorious 80-degree sunny summer late morning sharing roads with bikers and joggers do I need insane capability to have a blast while driving? No. And what about the open-top issue? Shouldn’t cars kept as fun cars be topless like the Lexus IS 350C?

Spirited Driving i8 vs. IS 350C
The BMW i8 has more real-world capability than you can put to use on public roads. That is fine by me. I think a great second car should have that, but at some point aren't we just paying for too much performance?. However, so too does the IS 350C. The BMW runs from 0-60 in about 4.4 seconds, the IS 350C does it in 5.6. There are not many places to actually do that in New England. Both also have “sport” modes that make the drivetrain come alive to enhance the experience. The BMW wins this category, but the IS 350C is surprisingly close.

Impressing Your Date or Friends: i8 vs. IS 350C
The i8 wows with great looks. Then the butterfly doors go up, and people clap, yell, and act like 4-year olds. It is a great party trick. Pick up a date and he/she will be impressed or you should not be dating him/her. The IS 350C does a great transformers dance when its multi-panel hard-top goes up and down. People watch, but they don’t start acting like monkeys. i8 for the win.

Fuel Economy i8 vs. IS 350C
The i8 wins this category too. In spirited driving, the i8 tells me my MPG was about 27.5. I get 25.5 MPG in the IS 350C doing the same. However, the i8 can also run on electricity alone for about 12 miles when fully charged. That makes the i8 a green-car award winner. The i8 wins but note how close the contest was.

Conclusion
The i8 at about $135K is a much less achievable second car than the IS 350C at about $55K. However, even factoring in cost it is still my choice, except that it is not offered with a removal roof of some type - Yet.