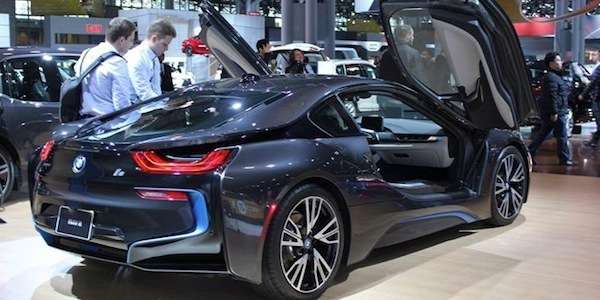 How the BMW i8 won the World Green Car award

The BMW i8 was declared the 2015 World Green Car at the New York International Auto Show. How did the i8 get there?
Advertisement

The Road to the BMW i8 winning the World Green Car began in Paris on October 2, 2014, followed by a stop in Los Angeles for a test-drive of the North American contenders in November of last year. The “Top Three in the World” finalists were announced at the Geneva International Auto Show in March. The journey ended at the New York International Auto Show where the winners were declared to the world.

The BMW i8 was chosen from an initial entry list of 10 new global vehicles, then a short list of three finalists that included the winning BMW i8 as well as the Mercedes-Benz S 500 Plug-In Hybrid and the Volkswagen Golf GTE were on the road to World Green Car being announced in New York.

Five green experts who are familiar with these new technologies are appointed annually by the World Car Awards Steering Committee to extensively review all documentation and specs associated with each car. The 75 World Car Awards jurors then voted on the expert’s recommendations in February and their ballots were tabulated by the international accounting firm KPMG.

For the BMW i8 and the other finalists to be eligible for the 2015 World Green Car award, the vehicles must be all-new, or substantially revised, in production and introduced for sale or lease to the public in quantities of at least 10 in at least one major market during the period beginning January 1, 2014 and ending May 31, 2015.

The five judges took into account the vehicles tailpipe emissions, fuel consumption, and use of a major advanced power plant technology (beyond engine componentry), aimed specifically at increasing the vehicle's environmental responsibility.

The i8 world-class sports car that comes with plug-in hybrid drive technology and innovative lightweight construction was also one of the finalists for...read more.

What did the experts say about i8?

The five experts commented that, “The BMW i8 gasoline hybrid looks so cool, it should be the icon for all “Green” cars. So it inspires Green Passion, which on paper looks like 155 mph on the i8's three cylinder turbo gasoline engine, four-wheel-drive and four seats. The i8 adds so much enjoyment to a sensible lifestyle that it needs to be recognized as a great Green Car.”

Who were the five green experts?

Together with the BMW i3 that won the World Green Car Award 2014, BMW i8 shows BMW’s “purpose-built strategy” when it comes to electric cars. Ulrich Kranz, Director BMW i Model Line, said, “BornElectric instead of conversion is the way to go.”

Image Source: BMW by way of Aaron B.

LG's New EV Battery Plant Is a Welcome News for Tesla
Tesla Giga Berlin's New Hurdle: It's Not Only the Gov't, but Now Tesla Itself
END_OF_DOCUMENT_TOKEN_TO_BE_REPLACED