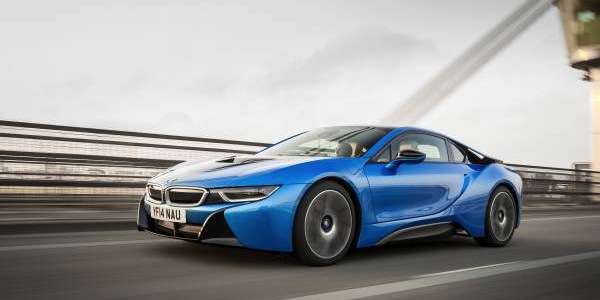 Is the new BMW i8 too extreme for performance enthusiasts?

The new BMW i8 has been named Top Gear magazine’s global Car of the Year 2014. Is it too radical for performance enthusiasts?
Advertisement

The future of high-performance is here and the new BMW i8 is already a huge success for the brand. The award puts the i8 ahead of some “stiff competition” from a host of other premium and luxury manufacturers to win the overall award. The Top Gear magazine’s global Car of the Year 2014 award, and the new i8‘s sales, point to a bright future for the plug-in hybrid performance vehicle from BMW.

The new BMW i8 was praised by the editorial team of Top Gear for “its breadth of abilities.” Its 1.5-liter three-cylinder turbocharged gas engine combined with an electric motor produces 357 horsepower and 420 lb. ft of torque that gives the sports car a 0-62 mph sprint time of 4.4 seconds. That’s also due in part to its light carbon fiber reinforced central tub. It delivers the kind of high-performance that would excite any driving enthusiast.

i8 delivers the performance future now

Charlie Turner, Editor in Chief at Top Gear magazine, said: “The BMW is a milestone in the annals of automotive history and a glorious statement for an exciting and positive future. The i8 delivers, and then some. It’s the kind of car we should celebrate, a beautiful vision of the future, delivered now. It is a resounding success for the BMW i8 and the whole team were unanimous in naming the BMW i8 as Top Gear magazine’s Car of the Year.”

In the UK, so far, an estimated 200 BMW i8 cars have been delivered to British customers, but BMW says its orders now total more than 400 cars, more than one year of BMW’s original British production allocation. According to AutoExpress, BMW has already sold every single car it intended to produce in one year in just a few months, smashing its own production expectations with the new i8.

BMW expects i8 to be a game changer

BMW developed the new i8 for performance enthusiasts who wanted both high-performance and efficiency in a luxury package. Dr Ian Robertson, BMW AG Management Board member for Sales and Marketing BMW, said: “We always knew the BMW i8 was going to be a game changing vehicle and the strength of orders shows just how desirable this car is for customers.”

BMW is using the i8 and i3 plug-in hybrids to advance their position in the market as the world’s best-selling and most innovative premium car manufacturer. The new i8 offers neck-snapping acceleration and driver enjoyment all wrapped in a package that takes BMW’s Efficient Dynamics philosophy to the extreme. Even thought the price tag is over $135,000 US, it’s not stopping buyers around the globe from snatching up the plug-in hybrid performance vehicle faster than BMW can build them.

Aaron Turpen wrote on December 5, 2014 - 11:31am Permalink
After four days in this wildly awesome car, all I can say is: drive it. It's awesome. I think it will sell well to the crowd it's intended for.