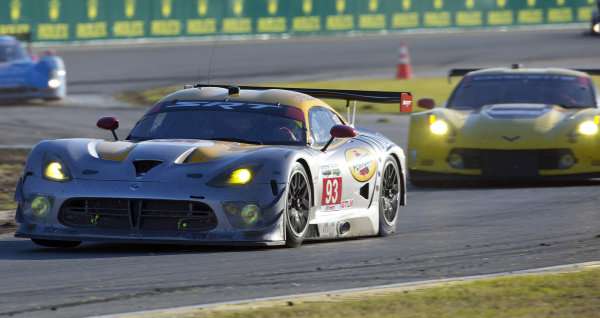 While the SRT Viper GTS-R teams that took to the high banks of Daytona International Speedway for the 2014 Rolex 24 weren’t able to repeat the victory posted by the Viper team back in 2000, this week proved to be a very successful return to the legendary event for the modern Viper race program – finishing 3rd in class, 12th overall and beating both of the Chevrolet Corvette C7R teams.
Advertisement

Although the modern SRT Viper GTS-R race program has been competing for the last two seasons in the American LeMans Series, this past weekend marked the first time that a factory backed Viper race car has competed in the Rolex 24 at Daytona International Speedway. The last time that we saw a Viper compete in the grueling event was back in 2000 and in that run, Team Oreca drove their #91 Dodge Viper GTS-R to an overall victory, beating the #3 Chevrolet Corvette by a narrow margin while the other Team Oreca Viper (#93) finished 4 laps back in 3rd place overall. While the event is vastly different now with the inclusion of the much quicker prototype race cars, the drivers of the Viper and Corvette race cars are all different and – obviously – the cars themselves are much different, the 2014 Rolex 24 saw the reincarnation of the classic Corvette/Viper battle as the #3 and #4 factory-backed Corvettes taking on the #91 and #93 factory-backed Vipers.

The new SRT Viper GTS-R race teams struck first, with the #91 Viper claiming the class pole position while the #93 Viper qualified 3rd in the GTLM class. The #4 Corvette C7R qualified 4th in class and mechanical problems prevented the #3 Corvette from making a qualifying attempt so as the Detroit rivals headed into race day – the Vipers had the early edge.

As the 2014 Rolex 24 Hours of Daytona began on Saturday at 2:10pm, the #91 SRT Viper GTS-R quickly showed that the qualifying effort was no fluke and through the first few hours of the race, the #91 car held the lead spot in the class with the #93 close behind but both of the Corvette C7R cars slowly worked their way towards the front of the GTLM class. Unfortunately, as the race neared its 10th hour, the #91 Viper came down pit road and made the hard left hand turn into the garage area. Driver Marc Goossens reported a problem with the steering system which was diagnosed as a broken power steering line. The team quickly repaired the issue but 15 minutes were lost while that fix was performed and that put the #91 Viper 12 laps behind the GTLM class leader when the team got the car back on the track.

To make matters worse, just as the #91 SRT Viper was returning to the track, the #93 Viper got caught up in a crash that tore up the front end and sent Jonathan Bomarito to the pits for some significant front end repairs. During the ensuing caution, the #93 team repaired the front end but several laps were lost to the leaders as a result of the crash. In the meantime, the #3 and #4 Corvette C7R teams continued to battle for position until the #3 Corvette was forced to retire due to engine overheating issues – leaving the #4 Corvette to battle it out with the rest of the GTLM cars.

As the field entered the early morning hours of the Rolex 24, the #91 SRT Viper was slowing working its way back up through the field. By the time that most fans (like me) were getting out of bed on Sunday morning, the #91 team had gone from 12 laps down to just 8 laps down. As the hours went by and the field neared the 2:10 end time of the race, the #91 Viper continued to make up laps and pick up positions and as the racers entered the final hour of the race, the drivers of the #91 Viper had gotten within four laps of the class leader. While the driver(s) #91 Viper were working their way up through the field, the #93 Viper continued to hold steady until a gearbox problem late in the race caused the car to spend lengthy amounts of time on the pit road. This forced the #93 Viper more laps down and by the end of the race, the #93 car was 26 laps down to the class leader with a final position of 6th in class and 27th overall. On the other hand, as the #91 Viper worked to within 4 laps of the class leader – and the #4 Corvette team ran into gearbox troubles of their own – the top qualifying Viper was able to move into the 3rd position in the GTLM class and the 12th spot overall. The best finishing production-based Corvette was the #4 C7R that finished 6th in class and 16th overall while the #3 Corvette was forced to settle for a very disappointing 10th in class and 60th overall.

While the race as a whole wasn’t as successful for the modern SRT Viper GTS-R race teams as it was back in 2000 – the Viper’s return to the Rolex 24 was a very positive one. The Viper was able to beat out the cross-town rivals and realistically, the #91 Viper was clearly one of the best cars in the GTLM class all day. The drivers of the #91 Viper were able to make up 8 laps during the course of the second half of the race – meaning that they passed the GTLM class leaders 8 times en route to their 3rd place finish. If not for the power steering line failure, it is hard to imagine that any car in the class would have been able to keep pace with Dominik Farnbacher, Marc Goossens and Ryan Hunter-Reay.

The SRT Viper GTS-R and Chevrolet Corvette C7R race teams will continue to battle throughout the 2014 racing season with various endurance races around the world and the American LeMans Series. Right now, the score is Vipers 1 – Corvettes 0.

exviper wrote on January 28, 2014 - 1:19pm Permalink
The Viper isn't much of a story here - the Corvette is. A quick comparison: Viper GTS-R "unveiling" - April 4, 2012 Viper GTS-R racing debut - August 4, 2012 (Mid-Ohio, ALMS) Length of race: 2 hours, 45 minutes Days between unveiling and racing debut - 122 Days between unveiling and 2014 Rolex 24 - 662 Highest position finished in debut - #10 of 13 cars Manufacturer quote: "SRT Motorsports’ Team Viper was candid about its mission in Saturday’s American Le Mans Series event at Mid-Ohio. The mission – have both SRT Viper GTS-R race cars running at the finish of the Mid-Ohio Sports Car Challenge in the GT class." Corvette C7.R "unveiling" - January 13, 2014 Corvette C7.R racing debut - January 25, 2014 (Rolex 24, Daytona) Length of race: 24 hours Days between unveiling and racing debut - 12 Days between unveiling and 2014 Rolex 24 - 12 Highest position finished in debut - #5 of 11 cars in class Manufacturer quote: N/A There really is no comparison: Viper took almost two years to get to that 3rd place finish in its class while the Corvette took less than two weeks to get 5th. This is reminiscent of the pathetic Laguna Seca showing where the brand-new Viper GTS couldn't even best the outgoing Corvette ZR1. So with SRT CEO Ralph Gilles tweeting that professional race car driver Randy Probst "has always struggled with the Viper", back to the drawing board SRT goes in order to develop the Viper TA, . How many tens or hundreds of thousands of dollars were thrown at this already-brand-new car to get it competitive with the discontinued Corvette? Who knows? But when Motor Trend tested this new Viper variation with the goofy name they found that it was indeed faster than the four-year-old Corvette - by a scant 0.08 seconds. Yep, all that hype for less than 1/10th of one single second around Laguna Seca. Wow. Make no mistake, it is great to see two American-made sports cars duke it out (although Chrysler is now owned 100% by Italy-based Fiat), but the big news is a car that made its racing debut in a grueling 24-hour race just 12 days after it was unveiled. Not some car that spent well over a year tuning up on tracks around the world before it finally ran this race.
Honda_Swagger wrote on January 29, 2014 - 10:54pm Permalink
The Viper still beat the Corvette.
JD wrote on February 8, 2014 - 9:01am Permalink
Vipers indeed did prevail at this race, but too bad there is no mention of how well the (as outlined above) untested Corvettes did when they were running. Before all that though, both (all) cars are so highly modified by IMSA to "level the playing field" it's pretty difficult to determine which brand is doing the best engineering. However, in the world where cars are available to the general public and not dumbed down to equal some formula to please fans, it's pretty clear who offers the fastest, most reliable, most streetable and best value...all in one car.