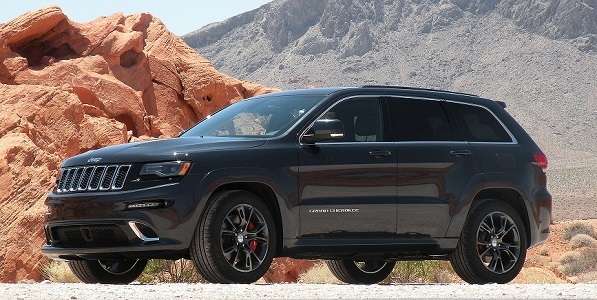 Should FCA Bring A Hellcat Jeep To Market?

America wants a Jeep Grand Cherokee Hellcat. The only question is can it work for Fiat Chrysler America?
Advertisement

The release of the Dodge SRT Hellcat Challenger and Charger has injected energy into a rising brand. The question remains, will Fiat-Chrysler of America (FCA US) put the highly touted power plant in the current WK2 iteration of the SRT badged Jeep? There are good arguments on both sides, but the overwhelming response should be YES!

The second generation of the SRT Jeep Grand Cherokee has become the best-selling vehicle in a SRT lineup that includes the Dodge Challenger, Charger as well as the vaunted Viper. With the popularity of sport utility vehicles and crossovers in America, many consumers are looking for a way to get their performance and utility in one package. The SRT Jeep has been one model that has provided that practicality with sports car performance in the same platform. With 0-60 times that rival the likes of Ford’s Mustang GT and Chevy’s Camaro, the Jeep can haul around a family of four comfortably on the way back from an excursion to the local grocery store.

The question then becomes, does America really need a 707 horsepower grocery-getter? The answer is both simple, and yet complicated. While it was easy for Dodge to drop the Hellcat engine into the Challenger and Charger , the physics of that much power in an all-wheel drive vehicle becomes an engineering nightmare. Having a factory warranty on a roughly 5,000lb vehicle pushing out 650 pound-feet of torque requires a newly developed drive line that would include a beefed up transfer case to help drive the front wheels.

The first generation transfer case of the SRT Jeep has been proven to support many of the high horsepower builds of the Jeep enthusiast crowd in excess of 1,000 horsepower to the wheels, but is it strong enough to be reliable on a factory beast with a 100,000 mile powertrain warranty? Does the development cost outweigh the benefits of competing with the likes of the Porsche Cayenne Turbo S or BMW’s X5 and X6M?

The other issue is cost. Are people willing to pay over $80,000 for a Jeep? The Hellcat option in the Challenger and Charger models provides roughly a $15,000 increase over the pedestrian 485 horsepower, 392 powered cars of the LX platform. With the standard SRT Jeep having a starting base price of $64,595, the Hellcat Jeep could push the sticker prices into the high $80,000 range.

While the second generation SRT Jeep proved to be much more expensive than its earlier model, sales have increased considerably from the first generation. This goes to show that people will spend that kind of cash to get their adrenaline pumping in a sport utility if it comes with the kind of excitement that Jeep has built into their top of the line offering. The one knock often heard though, is that Jeep dealerships can’t provide the kind of service expected with a vehicle coming with such a large price tag. That would be a piece of the puzzle that FCA would have to overcome with an entry into the upper echelon of an ultra-premium SUV category that Porsche and BMW have been playing in for decades.

So is there a market for an American barnstormer in the ultra-high-performance SUV category…Absolutely! Americans love horsepower, so why wouldn’t they love more kick in their beloved sports utility category? The Hellcat Jeep would provide a halo vehicle back to their lineup that would create unprecedented press for a brand that has been growing under the leadership of Sergio Marchionne and FCA. With the recent announcement that Dodge has stopped taking orders for the Hellcat Challengers and Chargers due to overwhelming demand the better question http://www.torquenews.com/106/chrysler-halts-new-orders-hellcat-challenger-charger-details might be, could Chrysler keep up with production on the berserk Hellcat engine that has already taken over the dreams of so many performance car fanatics across the country?

Benjamin Biller wrote on March 19, 2015 - 10:28pm Permalink
I will order one as soon as the order banks open up.
Craig Couture wrote on March 19, 2015 - 11:11pm Permalink
Make sure you send me pictures Benjamin! I will be extremely jealous!
LarryC wrote on March 21, 2015 - 11:34pm Permalink
I fail to see a problem with making the Hellcat engine available in the Jeep SRT. It's not like the whole Jeep lineup would have to be beefed up to handle the extra power....only the Jeep Hellcat. The price factor wouldn't be an issue to those that are lucky enough to be able to afford one either. Those that want one will pay to get one.
Craig Couture wrote on March 23, 2015 - 1:00am Permalink
I agree with you Larry, except for one small piece. The issue with bringing a 707 horsepower SUV to the market isn't all about the price to the consumer. It will be about developmental costs and if the sales will warrant those developmental costs. Its not cheap to develop parts and if you are only selling a few thousand Hellcat Jeep's, the accountants like to check the box labeled "NO!"
LarryC wrote on March 24, 2015 - 11:33am Permalink
I see your point but I have to disagree. There are already Jeep SRTs out there that have more than 1000 HP using aftermarket parts. Some are even daily drivers. I feel confident that the factory could replicate the aftermarket with parts & systems that could handle the increased power & torque. As far as sales numbers go....from the public's response to the Challenger & Charger Hellcat....I would be willing to bet that every Jeep Hellcat that FCA could build would be sold before it hit the showroom floor. So thel question isn't whether the sales numbers would be acceptable. The real question would be whether FCA could supply the product to meat the demand.
Ron wrote on March 23, 2015 - 8:46pm Permalink
ive already seen a company putting the hellcat into a Jeep Wrangler. Man, what fun that would be. I'd be happy if they offered a 5.7 or 6.4 hemi in the Wrangler straight from the dealership as I'm sure lots of others would be too, with the amount of people that put 35" and 37" rubber on.
Rob wrote on March 24, 2015 - 2:12am Permalink
They can't even make challenge r Hellcat orders. Now this right. So much for.$ 59,000 out of reach for most working class
Dan wrote on March 24, 2015 - 3:52pm Permalink
It would be great to see, but it would be way to expensive to move the numbers they would need to make a profit. I have several friends with SRT8 Jeeps they love the vehicle but hate the price. The dealerships would slap a 20 grand markup on them and there would be a very short lived run on them. The dealer network for FCA would kill that dream.
LarryC wrote on March 25, 2015 - 4:03am Permalink
Unfortunately you are correct. I would love to see FCA put a penalty on dealerships that tacked an additional "above list price" markup on vehicles. This practice is what keeps some of the best performance vehicles out of the hands of everyday Joes.
SANTOS wrote on March 31, 2015 - 3:53pm Permalink
IT WOULD BE NICE IF THEY WOULD MAKE THE JEEP HELL CAT I WOULD TRADE MY 2014 SRT FOR THE JEEP HELL CAT HOPE THEY BUILD IT IT WILL BEAT ALL SUV COMERS