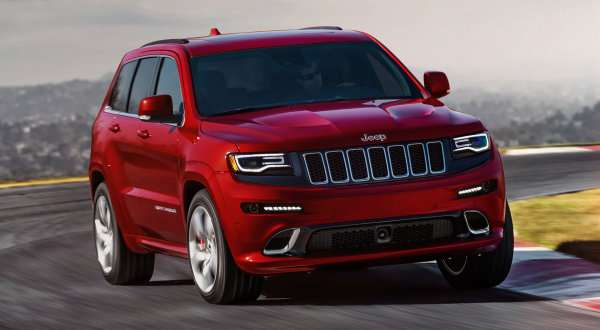 The 2015 Jeep Grand Cherokee SRT Gets More Power, More Luxury for Only $115

The Chrysler Group has rolled out all of the information on the 2015 Jeep Grand Cherokee SRT and as expected, the new high performance SUV gets some improvements including a bit more power and a new noise cancelling system, but in an unexpected move, there is no significant price hike with the new model year – as the price increases by just $115.
Advertisement

The Jeep Grand Cherokee SRT might not be the most powerful high performance sport utility vehicle in the US market, but it rivals the higher powered Porsche Cayenne on any road course – and in price. For 2015, the Grand Cherokee SRT gets even better, with a very modest power increase of 5 horsepower and 5lb-ft of torque along with a new noise cancelling system that improves the luxury feel. The added power and quieter interior is nice, but what is even nicer is that the 2015 Grand Cherokee SRT with more power and more interior technology costs only $115 more than the 2014 models.

The Cayenne is offered in two gas-powered trims – S and Turbo. The Cayenne S packs a V6 engine with 420 horsepower and 406lb-ft of torque that allows it to run from a stop to 60 in 5.2 seconds en route to a top speed of 161 miles per hour. The Cayenne Turbo packs 520 horsepower and 553lb-ft of torque from a turbocharged 4.8L V8 and this top of the line model hits 60 from a stop in just 4.2 seconds while boasting a top speed of 173.

While the top of the line Porsche Cayenne might beat the 2015 Grand Cherokee SRT in the quarter mile, an SRT Jeep owner would have enough money left over after buying his or her 475hp SUV to run out to a Dodge dealership and buy an SRT Challenger that will make short work of the Cayenne Turbo.

More Luxury, Same Jeep Working Abilities
In addition to the new power, the 2015 Jeep Grand Cherokee SRT gets a new noise cancelling system that adds an extra touch of luxury. This system uses four microphones around the vehicle and the impressive SRT speaker system to remove wind and road noise. However, it doesn’t mute the roar of the 392 cubic inch Hemi. While some might question the point of a luxury feature like Noise Cancellation, keep in mind the high end luxury models with which the SRT Jeep is competing. The Grand Cherokee is known for being a hard working SUV, but in SRT trim, there is no question that the interior is more fitting of a sport luxury sedan. More importantly, this 470hp Hemi powered Grand Cherokee offers incredible performance without compromising the expected capabilities of a large SUV. The SRT model offers the same impressive passenger space, cargo capacity and towing abilities as any other Grand Cherokee. Like the 2014 models, the 2015 SRT Grand Cherokee can tow 7,200lbs and having towed a trailer with a 2014 model – I can attest that this high performance, track tested SUV can pull a trailer with the best of them.

Paul wrote on September 4, 2014 - 2:35pm Permalink
Actually, it's only a $15 dollar difference from 2014 to 2015. I ordered mine last month so I know. I love unique cars, especially the ones with no clear competitors. Like JGC SRT. Nothing even similar in the price range.