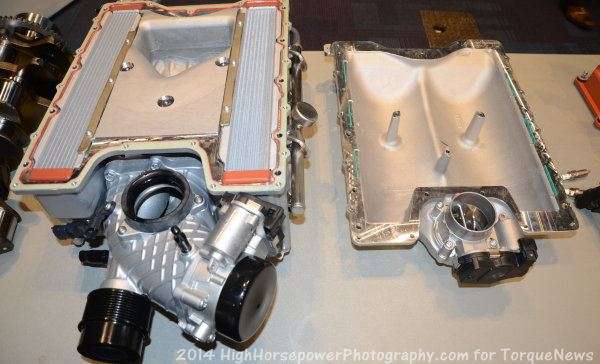 I recently had a chance to attend an in-depth walk-through of the new Hellcat Hemi with SRT drivetrain engineer Chris Cowland and I learned that the true secret to the new Challenger and Charger making 707 horsepower safely all comes down to cooling – with unique features throughout the engine bay working together to keep the most powerful American production motor ever running as cool as possible.
Advertisement

In case you didn’t know, an engine like the Hellcat Hemi that allows the 2015 Dodge Challenger and 2015 Dodge Charger to deliver 707 horsepower creates a tremendous amount of heat. All combustion engines obviously create heat, but an engine that uses forced induction to create such massive power levels creates far more heat than your average daily driven vehicle. This created a challenge for the Chrysler engineers to design the Hellcat Hemi in a way that would allow it to make monster power and to do so safely enough to serve as a hard charging daily driver for years to come.

Today, I bring you a quick look at the many unique cooling features that allow the 2015 Dodge Challenger and 2015 Dodge Charger to offer 707 horsepower from an engine that can be driven every day in even the worst conditions.

Next, the aluminum cylinder heads of the Hellcat Hemi were constructed out of A356 aluminum alloy with high strength and high thermal conductivity. The cylinder head valves are huge, with hollow stemmed 2.13 inch intake valve helping to get enough air and fuel into the combustion chamber while 1.66 inch sodium filled valves help to move exhaust gasses out of the chamber while also helping to further reduce internal temperatures. Also, once those exhaust gases are sent into the exhaust manifolds, a double layered design helps to keep the heat out of the engine bay as the super heat air travels to the high flow dual exhaust system that includes high heat, low restriction catalytic convertors.

Speaking of the fuel, the Hellcat Hemi uses a set of 8 high flow fuel injectors that spray literally all of the time under load due to the need for lots of fuel. Also, similar to NHRA top fuel dragsters, the constant fuel flow in the Hellcat Hemi provides a cooling effect as well, as the vaporized fuel that isn’t included in the detonation cycle helps to lower combustion chamber temperatures. To get an idea of how much fuel the Hellcat Hemi uses under full throttle, if you put the 8 injectors in a pint glass and simulated a wide open throttle situation – the Hellcat’s injector’s would fill a pint glass in 7 seconds. Working with this massive fuel flow is a piston cooling system that works with the high capacity engine oiling system to keep the pistons as cool as possible under even the most rigorous conditions. The Hellcat uses a unique 0w-40 Pennzoil Ultra Synthetic oil specially developed for SRT applications and a high capacity oil engine cooler helps to keep the oil cooler under any condition.

The Hellcat Supercharger
While the both the internal and external design of the Hellcat Hemi in the new Charger and Challenger helps to make the engine durable under major load, none of that major load would be possible without the unique supercharger mounted to the top of the engine. IHI designed and builds the entire supercharger unit for the Hellcat Hemi. This supercharger is capable of displacing 2380cc per revolution and the unit includes integrated charge coolers and an electric bypass valve that maintains a maximum boost pressure of 11.6 psi. This unit is self-lubricating and sealed for life, so there is no need to worry about changing the oil at the rear of the supercharger assembly or the grease at the front of the unit.

The most significant features of the Hellcat IHI supercharger are the integrated water to air heat exchangers (aka intercoolers) that help to reduce the charge air temperatures (the air being forced into the engine) to right 60 degrees Celsius. This is achieved by a unique cooling loop that only cools the supercharger housing with cooling fluids that are kept around 40C for improved heat rejection capacity. In other words, the Hellcat’s supercharger has its own cooling system that functions independent of the engine coolant and it helps to ensure that the supercharger itself and the air entering the engine are cool enough to make 707hp all day long.

The image at the very top of this article shows the Hellcat Hemi supercharger unit with the top removed. On the left side is the blower unit with the integrated intercoolers on each side. On the right side is the “lid” of the blower, sitting upside down so that you can see the rounded areas in which the air rides before being jammed into the engines.

The Result
While some of these features may seem redundant, I have been witness to the advantages of these massive cooling system enhancements in the 2015 Dodge Challenger SRT Hellcat. At the media launch, the Hellcat Challengers being tested on the road course at Portland International Raceway were driven hard on the track for several straight hours with no real breaks and those who race know that “hot lapping” is a great way to push an engine to its limits. Well, after four hours of abuse, none of the Hellcat Challengers on hand showed one bit of weakness. No overheating, no drop in performance – nothing but the pure unadulterated fury of the most powerful American production engine of all time.