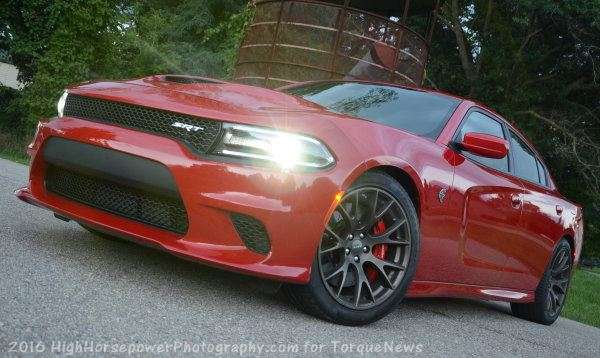 The SEMA Show has announced their awards for the “Hottest” vehicles of the 2016 show, with the Dodge Charger being named the inaugural Hottest Sedan of SEMA while the Jeep Wrangler claimed the title of the Hottest SUV of SEMA for the 7th straight year – allowing the Jeep to remain the only SUV to win the title since it was introduced back in 2010.
Advertisement

Back in 2010, the SEMA Show introduced their “Hottest” awards to honor the car, truck and SUV that proves to be the most popular among the show vehicles inside and outside of the Las Vegas Convention Center. These awards are decided simply by counting the number of each vehicles on hand and the award goes to the car, truck and SUV which appears the most frequently at the SEMA Show that year.

The problem with this award system is that in a show geared so heavily towards pickup trucks and muscle cars, sport compacts didn’t have a real chance of beating the American muscle cars, so in 2011, SEMA added the Sport Compact classification, but that still excluded larger cars. To give the larger cars a chance at being recognized in a field of Mustangs, Camaros and Challengers, SEMA introduced the Hottest Sedan for 2016 and, not surprisingly, the Dodge Charger took that title.

The Dodge Charger has been a popular show car at SEMA over the past few years, but the arrival of the Hellcat package took the interest in this high performance sedan to the next level. Unfortunately, even with the growth in popularity, the Charger still doesn’t get as much interest at SEMA as the Challenger, Camaro or Mustang, so it really never stood a chance of challenging for the Hottest Car of SEMA award. The same is even more true of the less popular, less powerful sedans, so none of these four door cars stood a real chance of being the most popular car at SEMA, and that was why the organizers introduced the Hottest Sedan of SEMA award for 2016.

“The Dodge Charger is an iconic vehicle among muscle cars and is an example of how an already great vehicle can be made even greater through personalization and customization. There are hundreds of products available for consumers to enhance the performance and styling of their Dodge Chargers,” said SEMA President and CEO Chris Kersting.

Hottest SUV of SEMA 2016
Joining the Dodge Charger in taking a major award home from the 2016 SEMA Show is the Jeep Wrangler, which was named the Hottest SUV of SEMA for the seventh straight year. The Wrangler is unrivaled in the world of performance SUVs, leading many of the exhibitors in Vegas to feature one of the classically designed Jeeps in their booth. As a result, the Jeep Wrangler has won the Hottest SUV of SEMA award every single year that it has been offered – and there doesn’t appear to be any change coming in the near future, as no SUV has the level of aftermarket support of the most legendary Jeep.

“Jeep is one of the most accessory-friendly vehicles available, having won the SEMA Award as the ‘Hottest 4x4-SUV’ repeatedly,” said SEMA President and CEO Chris Kersting. “Given the vehicle’s versatility as a daily driver and for off-road use, it comes as no surprise that the Jeep remains so popular among the automotive community.

So congratulations to Dodge for the Charger being named the Hottest Sedan of SEMA and to Jeep for the Wrangler continuing its clean sweep of the Hottest SUV of SEMA award. Based on a quick look at the aftermarket sedan and SUV segments, these are two models likely to repeat next year.