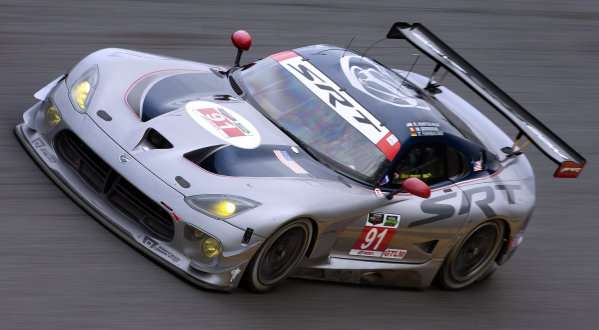 The mighty Viper GTS-R has returned to the Rolex 24 hour race at Daytona International Speedway after a 14 year absence and the Mopar supercar picked up right where it left off – claiming the top spot in the GTLM class thanks to a strong qualifying run by driver Marc Goossens.
Advertisement

The #91 SRT Viper piloted by Marc Goossens turned in a qualifying time of 1:44.506 to claim the GT LeMans (GTLM) class pole position for tomorrow’s Rolex 24 at Daytona International Speedway. Goossens will be joined by Dominic Farnbacher and Ryan Hunter-Reay for the day long race with an overall starting position of 24th.

“We had a good run at the end of last year, and we’re carrying it over. It’s awesome to be on the pole for the first race of the year. It’s a great way to start the season, and it’s a great boost of confidence for the whole team, said Marc Goossens in an IMSA report. “It’s not the most important thing to be on the pole for a 24-hour race, but it obviously helps. It’s good for Viper, especially with Jonathan third in a very competitive field. It’s great for Viper to be at this level after only a year and a half.”

The “Jonathan” who Goossens was referencing is Jonathan Bomarito, who drove the #93 SRT Viper to a third place qualifying position – just 35 thousandths of a second behind second place qualifier Nick Tandy in the #911 Porsche 911 RSR. Bomarito will be joined by Kumo Wittmer and Rob Bell in the 26th overall position when the race begins tomorrow at 2:10pm EST.

The last time a factory backed Dodge Viper competed in the Rolex 24 hour race at Daytona was in 2000 when Team Oreca out of France took the overall victory along with the class win but after that monumental win at the beginning of this century, no factory backed Vipers have competed in the 24 hours shootout at Daytona International Speedway. After running two seasons in the American LeMans Series with gradual improvements over that time, the two SRT Viper teams have descended on the famed American race course with the hope of repeating the success shown by Team Oreca back in 2000.

Things have changed a great deal since the #91 Team Oreca Dodge Viper won the 24 Hours of Daytona back in 2000 including the brand of the Viper, the name of the race itself and – most importantly – the influx of prototype race cars to the field. These wicked prototype cars are significantly quicker around the track than the production based GT cars so in this day and age it is nearly impossible for a GTLM car to claim the overall victory.

Because of this, it is highly unlikely that either of the SRT Vipers will claim the overall victory at the 2014 Rolex 24 but the strong qualifying runs and a trio of solid practice sessions has the SRT Vipers as the early favorites to win the GTLM class.

There is one more 2014 SRT Viper competing in this weekend’s Rolex 24 at Daytona and that is the brand spanking new #33 SRT Viper GT3-R owned by former Dodge Viper Cup champion Ben Keating. Jeroen Bleekemolen handled the qualifying duties for the #33 Viper GT3-R and qualified in the 7th spot for the GT Daytona (GTD) class but the team was moved up to the 5th starting position when two other cars in the class failed the post qualifying technical inspection.

“In a weird way I would say we are excited about P7 and even happier about P5,” Keating said. “We did not get the practice time we wanted in the morning and to end up now fifth after the challenges we had was a great job. We still feel like we have a lot of work to do to the car to have a car that is good to race for 24 hours. We were able to do one fast lap but apparently the car is a handful to drive. We are going to go back now and see if we can make it a consistently quick car which is a whole challenge in itself.”

Starting in the 5th spot is a solid start for Keating’s Viper GT3-R team but it will be a long, hard 24 hour race with the GTD class in which the GT3-R competes being the biggest class in the Rolex 24 with a whopping 29 cars entered. Joining Keating and Bleekemolen for the 24 hour race are drivers Emmanuel Collard and Sebastiaan Bleekemolen, older brother of Jeroen Bleekemolen.

The Rolex 24 at Daytona kicks off tomorrow afternoon at 2:10pm EST and the fields will lap the 3.56 mile course for 24 straight hours. If things go as planned for the SRT teams, a Viper could claim both the GTLM and GTD titles in the 2014 Rolex 24.