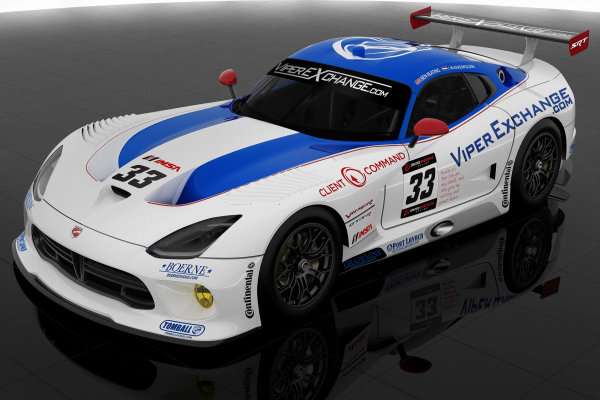 The Chrysler Group’s Street and Racing Technology Division has announced that the first Viper GT3-R race car is being prepared for Ben Keating’s race team with the expected debut coming at the Rolex 24 at Daytona Motor Speedway in January 2014.
Advertisement

Ben Keating was the first person to order the new SRT Viper GT3-R when it was introduced earlier this year and considering Keating’s success in the Dodge Viper Cup with the 2010 Viper ACR-X, it should come as no surprise that he wanted to snatch up one of the new GT3 race cars. There hasn’t been a whole lot of noise from the GTs-R camp since it was announced that Keating purchased the first new Viper race car built but with the Rolex 24 at Daytona about four months away, it seems that the newest Viper race program is well under way. In fact, Keating expects to begin doing closed track testing next month and open track testing by November as his team prepares for the grueling 24 hour race at Daytona International Speedway. Keating and his Viper GT3-R will compete in the GT Daytona Class of the United SportsCar Racing association and helping to make sure that Keating’s Viper is as competitive as possible is Riley Technologies – the same race shop that built the current SRT Viper GTS-R cars running in the American LeMans Series.

“I’m passionate about the car. I’ve had lots of success in the car and as soon as I heard there was going to be a GT3 Viper race car developed, I was the first person in line to jump on it,” said Keating. “I feel like I’ve got the best car, the best class structure and the best co-driver. Everything is fitting together perfectly for success.”

It should be noted that while Ben Keating will be competing with some of the best road racers in the world in his new Viper, he is not a professional driver. Keating runs Tomball Dodge in Tomball Texas – a dealership which boasts of being the top dealership in terms of Viper sales in the USA.

“I don’t have the time to invest to be a professional sports car driver,” said Keating, who operates the highest volume Viper dealership in the nation in Tomball, Texas. “However, I am passionate about racing and I’ve been successful in a Viper. I feel I can measure up extremely well compared to other amateur drivers, especially driving a Viper."

Joining Ben Keating in the new SRT Viper GT3-R will be Jeroen Bleekemolen, who hails from the Netherlands. Bleekemolen has a long and impressive racing resume including a win at the 12 Hours of Sebring earlier this year along with wins at the 24 Hours of Dubai in the GT Class each of the past two years. Bleekemolen was also the co-driver of the Viper team that won the FIA GT1 championship back in 2001 so this wont be his first time in the Mopar supercar.
“I think the Viper is going to be one of the best cars in the GT Daytona Class,” said Bleekemolen. “That’s one of the main reasons I’m pleased to join this team. The team is very strong and the Viper is one of the best cars out there. I raced the Oreca Viper back in 2001 for the GT1 championship, so I have some experience with the Viper.”

The new SRT Viper GT3-R is the first mass produced GT3 car designed and engineered in the United States. While the Corvette racing program has long been successful in a variety of racing associations, the Corvette C6-R race car is engineered by German-based Callaway. While the first GT3-R Viper will be used to race in the USCR, this new Viper race car will be eligible to compete in the Sports Car Club of America (SCCA), North American Road Racing Association (NARRA), Pirelli World Challenge GT Class and International GT3 Championships.

“Racing is in our name – Street and Racing Technology – so the line is very blurred between what we do on the road and what we do on the track,” said Beth Paretta, director of Marketing and Operations, SRT Brand and Motorsports. “Racing is a big part of everything that SRT does. It epitomizes the best of what our SRT performance brand represents and showcases the Viper’s natural affinity for performance. There’s no doubt the Viper GT3-R will be exciting to watch in 2014.”

With the Rolex 24 at Daytona still some four months away, it will be a while before the new Viper GT3-R hits the track but with several months of practice and tuning between then and now combined with the information that Riley Technologies has learned from their ALMS Viper race cars – Keating and Bleekemolen could be a team to watch in January when the cars take to the road course at Daytona International Speedway.