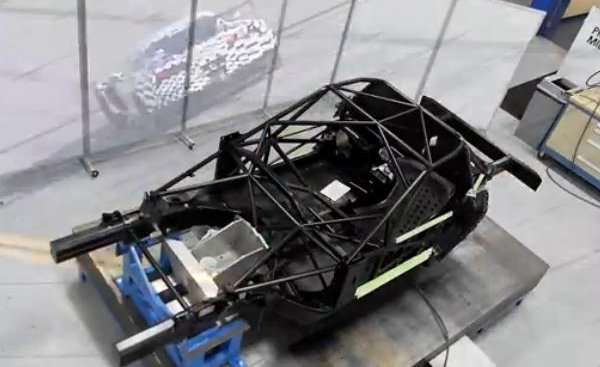 Pratt & Miller Engineering has offered up a short video that sweeps through the design, engineering and testing processes of the new Chevrolet Corvette C7R race car – giving Corvette lovers a chance to watch the newest track car to sport the crossed flags come to life in 4 minutes.
Advertisement

Pratt & Miller Engineering the New Hudson Michigan were responsible for the design, engineering, production and testing procedures for the new Corvette C7R race car just like they were for the C5R, the C6R, the Cadillac CTS-V race car and a handful of successful Grand Am racers including Pontiac GTOs and Chevrolet Camaros.

The Pratt & Miller Corvette C6R race cars have captured back to back GT class championships in the American LeMans Series along with a long list of major race wins in events like the 24 Hours of LeMans and the 12 Hours of Sebring. It can be argued that no race car builder in the world has had more success designing and building General Motors race cars so it came as no surprise to learn that Pratt & Miller Engineering was tasked with the new C7R project. Fortunately for Corvette fans and lovers of all things that go very, very fast – Pratt & Miller chronicled the whole process and condensed it into a tidy 4 minute video.

It should go without saying that the development, engineering and testing procedures of the new Chevrolet Corvette C7R took hundreds – if not thousands - of hours so this 4 minute video doesn’t exactly walk us through the creation of the C7R step by step but it provides a quick overview of what led to the creation of the newest Corvette race car.

The video begins with the Pratt & Miller team discussing their approach over early sketches followed by a truncated look at the construction of the C7R chassis, the installation of the high performance racing engine, driver fitment and eventually the addition of the Corvette racer’s curvy, aerodynamically perfect body.

Throughout the video, we get glimpse of the finished product with shadowy clips of the Chevrolet Corvette C7R in the black and white checkered camo on the track. We also get brief looks at CAD design images of the chassis and the body and aerodynamic flow programs before the first Corvette Z06-based race car is loaded into the trailer to taken to the track.

The final two minutes (give or take) of the Chevrolet Corvette C7R build video shows the new race car in action on the track…first testing at what I believe to be Sebring International and then on the high banks of the Daytona Motor Speedway – where the new C7R will make its racing debut at this weekend’s Rolex 24. We don’t get any detailed track footage but we do get a chance to hear the new Corvette C7R as it blasts down a few straights, zips through a few turns and soars around the high banks of Daytona International Speedway…all with dramatic music, of course.