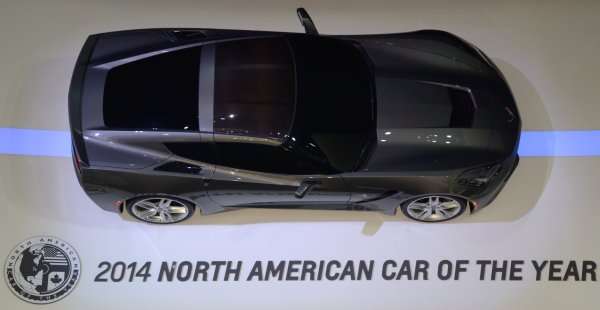 Now that we have met the 2015 Chevrolet Corvette Z06 and we are very familiar with the “normal” Chevrolet Corvette Stingray, it seems that General Motors has created a very large gap in the Corvette lineup that could be filled with a new medium performance package – a package that I think could be the C7 Corvette Grand Sport.
Advertisement

While the 2014 Chevrolet Corvette Stingray and the 2015 Chevrolet Corvette Z06 are fairly similar in many ways, the two GM sports cars differ widely in the level of performance offered. Both new Corvettes have the same basic exterior design, similar interior layouts, the Magnetic Selective Ride Control system and a rear transaxle setup but thanks to the new supercharged LT4 V8 and some fairly subtle aerodynamic upgrades – the new Z06 is billed as the most track capable Corvette ever while the new Stingray is just really, really impressive.

The 2015 Corvette Z06 seems to essentially replace the C6 ZR1 with estimated numbers of 625hp and 635lb-ft of torque (the old ZR1 was 638hp, 604lb-ft of torque) while the basic Corvette Stingray “only” offers 460hp and 465lb-ft of torque. Throughout the most of the history of the Corvette, there has been a similarly large difference between the highest performance and lowest performance model in the lineup but in the past, General Motors has also offered a medium performance model that offered an option to those buyers who wanted better than base level performance without paying the big bucks for the most powerful package. During the C6 generation, the Corvette Z06 was this mid performance package between the standard Corvette and the ZR1 but with the C7 Z06 packing such huge power and what will likely be a huge price – there is no longer an option for buyers who want slightly better performance than the Stingray without paying six figures for a supercharged Z06.

As the mid performance model the previous generation Corvette Z06 offered less than a hundred more horsepower than the base Corvette and 133 less horsepower than the ZR1 while carrying a starting price slightly above the fully loaded base Corvette yet some $37,000 less than the ZR1. A fully loaded 2015 Chevrolet Corvette Stingray will run you up around $73,000 and GM has stated that the 2015 Corvette Z06 will be similar in price to the outgoing ZR1 so along with the big difference in performance between the Stingray and the Z06, there is also a huge gap in pricing. It seems that these two gaps between the Corvette Stingray and Corvette Z06 will create a natural demand for a car that falls in the middle; kind of like the C6 Z06…but what would this mid level performance car be?

The Grand Sport name has been used off and on across the generations of the Chevrolet Corvette and during the C6 era, the Grand Sport package added a handful of handling goodies (many of which were borrowed from the Z06) with the standard drivetrain of the base C6 Corvette. The C6 Grand Sport effectively offered similar handling capabilities to that of the Corvette Z06 but it did so in a package that lacked the LS7 V8 or the $75,000+ price tag of the Z06. The Grand Sport literally replaced the Z51 handling package and making that change from Z51 to Grand Sport made good marketing sense. The problem with that idea now is that the base 2015 Chevrolet Corvette Stingray already features high end handling goodies like the Magnetic Selective Ride Control and advanced cooling features via the new Z51 package that has been ordered on the vast majority of C7 coupes ordered thus far. GM may decide to replace the Z51 package with a Grand Sport package similar to that offered on the C6 Corvette but making the modern Grand Sport a true mid level performance package to rank between the Stingray Z51 and the new Z06 could pay off in a big way.

This new and improved Chevrolet Corvette Grand Sport would feature lightweight rims wrapped in high performance rubber, a high end braking system similar to the standard steel brake setup (not the pricier carbon ceramic setup) to that in the Z06 and a similar Magnetic Selective Ride Control system to what is offered in all new Corvettes. Unlike the Stingray that comes with your choice of a 7-speed manual transmission or a 6-speed automatic, the C7 Grand Sport could feature the same 7-speed manual and new 8-speed automatic as the 205 Z06 but it would offer somewhere in the area of 510 horsepower from a lightly modified version of the Stingray’s LT1. Finally, the new Corvette Grand Sport could offer this jump in power from the basic Stingray for a price in the mid to high $70k mark so it would be more expensive than a loaded Stingray but less expensive than a new Z06 with only standard features.

Of course, this is all speculation but it is hard to argue that there is room in the Corvette lineup for a new mid level performance package and judging by the popularity of the C5 and C6 Z06 packages – there is clearly strong demand for a sub-$100k package that offers better performance than the “base” Corvette Stingray. Should GM go this direction – whether it Is called the Grand Sport or something else – I wouldn’t expect it to arrive any earlier than the 2016 model year so it could be a while before there is a mid level performance package for the C7 Corvette but I wouldn’t be surprised to hear more about this from GM in the coming months.

Auto Motive wrote on January 21, 2014 - 10:24am Permalink
The article was too long for the specific topic. Grand Sport will not be coming. The current C7 with 3lt package has price tags close to $80k. If I bought a base vette at $52k I can get Tom Henry racing in the Pgh area for a high performance package for $15k. I get 600 hp, supercharged with ported heads, better cam, and larger exhausts. My investment under $70k and warranty is still covered.
Bill Carver wrote on May 28, 2014 - 5:55pm Permalink
I have a 2014 Z51 with magnetic suspension and LT3. The sticker price was NOT $80K, it was under $66K. There is plenty of dollar room for another variation between Z51 and LT1 if GM feels that need exists.
Foster wrote on February 23, 2014 - 8:22pm Permalink
The Z16 aka Grand Sport package would be a great addition to the C7 line up. 2015 Z06 wide body, minus the extreme aero and carbon brakes, plus the LT1 with standard dual mode exhaust. I say build it Chevy. I want one!
Kerry wrote on February 24, 2014 - 6:11pm Permalink
I would think they could go with a slightly modified LT1 with about 525HP but i might also add they may go with the El Miraj 4.5L twin turbo but tuned to say 525-550HP and torque and take off about 100-150 lbs and have a brilliant high revving Ferrari threat to go along with the American Muscle.. I would say go better titanium exhaust superlight Magnesium wheels add carbon fiber rear end and doors have fewer speakers lighter carbon seats and even better lighter suspension. That way it would be totally different from base and ZO6. Have the 8 speed auto or 7 speed dual clutch or manual tranny/ On the ZO6 when all is said in done hope the HP moves up to at least 650-675HP better than the old ZR1
Mike wrote on January 13, 2015 - 4:28pm Permalink
Why would you need to increase the HP? Just take the base mechanicals and wrap them in the wider ZO6 exterior. I would love the base mechanicals with the better looking ZO6. Just like I love my C6 Grand Sport. When they do it in the C7, I will have to increase my garage. Just waiting patiently.
Doug wrote on October 20, 2015 - 2:52pm Permalink
The current "Grand Sports" are a farce ...the "original" 63 GS's where the ULTIMATE, BADDEST Corvettes...where the Z06's where just a track ready version of the stock vettes and looked no different.. GM needs to make the GRAND SPORT the top dog again..if it comes out again