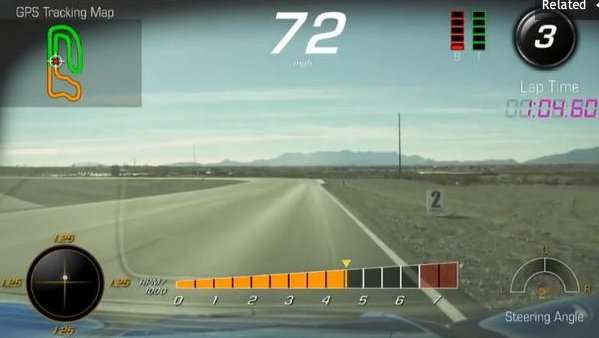 Yesterday we got our first look at the 2015 Chevrolet Corvette Stingray’s new Performance Data Recording system and today we get a closer look at the innovative new system in action as the folks from Engadget hit the track with the 2015 Stingray.
Advertisement

Engadget actually put together two videos of the new Performance Data Recorder that will be offered in the 2015 Chevrolet Corvette Stingray coupe, convertible and the upcoming 2015 Z06. The first is a quick, simple walk through of the functional components of the PDR system while the second video shows the replay feature of the PDR system at work as we watch an unspecified driver make 4 laps around the track with the help of a driving instructor.

The first video showing off the 2015 Corvette’s Performance Data Recorder is nothing groundbreaking, with just a quick overview of the components (giving us our first look at the location of the SD card slot in the glove box) and a brief overview of the functionality of the system. We also learn that the menu options for the Performance Data Recorder don’t work when the car is in motion but I suspect that an aftermarket “lock pick” tool could eliminate that little roadblock for those who want to toggle through the PDR options while driving. The voiceover guy also points out that the data screen chosen (Sport, Track or Performance Timing) selects which information is included in the video replay overlay. Track is clearly the most informative but since it relies on the track maps, perhaps it isnt as much fun on the open road.

The second Engadget video of the 2015 Chevrolet Corvette Stingray Performance Data Recorder is far more interesting as it shows the replay feature of the system as a 2015 Corvette makes a few laps around the race track. The PDR is set to Track mode so we get a look at the Stingray’s progress around the track on a small map, a G meter, a linear tachometer, a steering angle gauge, a gear indicator, a brake input gauge, a throttle input gauge, a digital speedometer and a lap timer. The driver is joined in the cockpit by a racing instructor and thanks to the integrated microphone system, we can clearly hear the instruction offered to the driver as he makes his way around the track each time. This mic system allows us a chance to hear the 2015 Stingray in action including the rev-matching feature that comes with the 7-speed manual transmission but we can also hear the driver miss a few gears and then make excuses to explain why he missed those gears.

Jokes aside, this video displays how valuable the Performance Data Recorder could be for 2015 Corvette owners who are receiving racing instruction as – with the microphone – the owner can review the information offered by the instructor as he (or she) watches the progress in the track videos. You can watch this driver get better with each lap and the PDR system would allow this guy to go back through the laps and see where he needs to improve – while also getting a chance to listen to the instructor while he is not focused on getting the 2015 Stingray around the track safely.

I said it yesterday when we first introduced this awesome new feature coming to the 2015 Corvette but I will say it again – this is one of the coolest new pieces of performance technology to hit the industry in years and this serves as one more reason to be jealous of those folks rockin’ the 2015 Corvette.