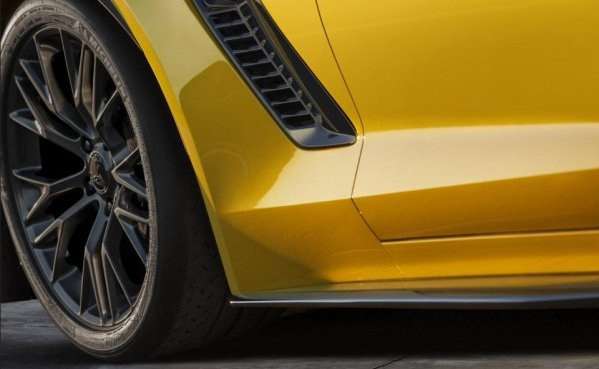 Corvette Fans Have Great Expectations for the 2015 Chevrolet Corvette Z06

There has been plenty of speculation about the 2015 Chevrolet Corvette Z06 that will debut in a few weeks at the 2014 North American International Auto Show and rather than add to that speculation ourselves – we turned to the Corvette lovers at StingrayForums.com for a look into what they expect to see when the 2015 Z06 is unveiled.
Advertisement

Since General Motors teased the 2015 Chevrolet Corvette Z06 a few weeks back – at which point they announced that the “most track capable Corvette ever” would debut at the 2014 North American International Auto Show in Detroit – the company has been surprisingly quiet about the newest super Vette. We did see a leaked photo of what appeared to be a new supercharged engine sporting the name LT4 and while we would all like to assume that the picture in question revealed the heart of the new Z06; that leaked image was far from official information. There are a great many assumptions that we could make based on what we know about the previous Corvette Z06, the previous Corvette ZR1 and the current 2014 Corvette Stingray but instead of guessing at what could be – we asked the members of StingrayForums.com what they really expect to see from the 2015 Corvette Z06.

First off, it seems that the Corvette world fully expects that the supercharged LT4 from the leaked Instagram image will indeed power the 2015 Z06. Members of the forum expect that this new mill will offer anywhere from 550 to 680 horsepower with the most popular figures sitting right around the 600 horsepower range. Quite a few members expect that it will offer somewhere in the range of 625 to 640 horsepower with a few members hoping that it will offer upwards of 650 horsepower and a few others suggesting that it will stick to the high end of the 500 range – thus leaving plenty of space for a range-topping C7 ZR1. StingrayForums member GQ4Life sums things up nicely by expecting around 580 horsepower if GM plans to introduce a new ZR1 down the road but if the ZR1 program is indeed a thing of the past, the power of the C7 Z06 could climb as high as 680 horsepower. On the other hand, forum administrator NickJ expects somewhere in the area of 605 horsepower and he is basing this estimate on the fact that the previous C6 Z06 offered 100 more ponies than the C5 Z06 which offered 405. 405 in the C5 Z06, 505 in the C6 Z06, 605 in the C7 Z06? It makes sense on paper.

Next up comes the discussion of how the 2015 Chevrolet Corvette Z06 will put all of that power to the ground. Some of our readers have commented that there could be a new dual clutch automatic mounted behind the C7 Z06’s supercharged LT4 but the folks at StingrayForums.com didn’t seem to lean that way. The vast majority of those members who commented believe that the C7 Z06 will rely on a similar 7-speed manual transmission to the one offered in the “base” 2014 Corvette Stingray although some members speculated that there could be an 8-speed automatic option as well – one of which suggested the possibility of new dual clutch technology.

Putting the kind of power that we talked about above to the ground will take some serious tires and this was one area in which the StingrayForums members agreed across the board. It is expected that the 2015 Corvette Z06 will rely on a new set of Michelin Pilot Super Sport Cup tires measuring 285 wide up front on 19 inch rims and measuring 335-345 out back on 20 inch rims. This area is kind of a given considering that the only teaser image from GM shows the new rims wrapped in Michelin tires but it is still worth noting.

The biggest figure in the world of supercars is power to weight ratio and it is widely expected that the 2015 Chevrolet Corvette Z06 will be one svelte beast. The forum members suggested all sorts of features that could help to drastically cut down the weight of the C7 Z06 such as removing the cylinder deactivation components, a magnesium engine cradle, carbon fiber body panels, lighter exhaust components and possibly even an ultra lightweight carbon fiber cabin framework. Guesses as to how much the 2015 Z06 will weigh vary from one member to the next but it is totally expected that the C7 Z06 will weigh less than the outgoing C6 Z06.

Finally, the biggest sticking point that prevents most dreamers from becoming Z06 owners is the price and the members at StingrayForums.com have a varying opinion as to what to expect in terms of the pricing of the most track capable Corvette ever. The most popular pricing suggestions seem to hover in the area of $85,000-100,000 for the base price with options taking the final price up into the range of $120,000. NickJ pointed out that the C6 Z06 started around $75,000 so a starting price for the C7 Z06 of $80,000 seems perfectly reasonable – although options could cause the price to climb up around (or into) the six figure range. Moderator elegant pointed out that the current (C6) Z06 tops out around $103,000 with all of the functional options (not including the engine build program) so it would be hard to imagine that an even better C7 Z06 would top out less than the 6th generation models. In other words, the base price could start in the 80s and climb up into the 110s with some available goodies but if the C7 Z06 is heavily optioned in standard form – perhaps there wont be $30,000 worth of options to select.

Other features of the 2015 Chevrolet Corvette Z06 that members of StingrayForums.com hope to see include an exterior package that makes the Z06 considerably more aggressive than the standard Stingray, a redesigned hood that makes room for the supercharged V8, an even larger carbon ceramic braking package and an exterior color choice that is unique to the Z06.

Site Moderator elegant took the proposed questions a step further and painted a picture of exactly what he expects when the 2015 Corvette Z06 debuts in Detroit. His insight was detailed enough that I have included it below in italics for you all to check out and there is no question that if elegant is on the money – the 2015 Z06 will be a truly remarkable (albeit expensive) American supercar.

The 2015 Chevrolet Corvette Z06 will make its grand debut at the 2014 North American International Auto Show in Detroit which opens in just under two weeks so it won’t be long before we find out just how close the Corvette fans at StingrayForums.com were with their expectations for the 2015 Z06. A special thanks to the staff and the members of StingrayForums for taking the time to offer up their hopes for the new Corvette Z06!