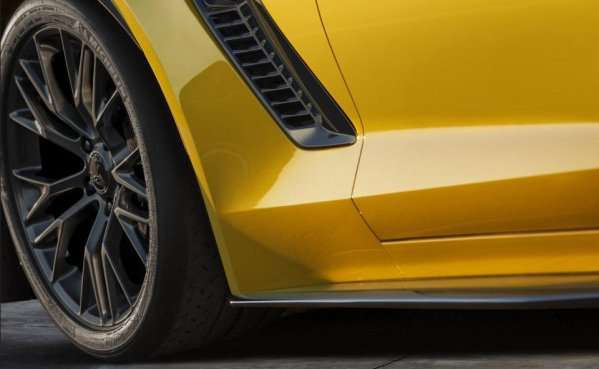 The 2015 Chevrolet Corvette Z06 Might Be the Ultimate Viper Slayer

The 2015 Chevrolet Corvette Z06 is set to debut as the most track capable Corvette ever and should that be the case, the newest Z06 might be GM’s best bet at knocking the mighty SRT Viper off of its pedestal as the ultimate American supercar for more than a few months.
Advertisement

Over the past decade, when you think about American high performance two names come to mind most quickly – Chevrolet Corvette and Dodge Viper. While Ford’s GT500 Mustang is a monster in its own right, it realistically cannot hang with the best that GM and Chrysler have to offer in terms of supercar performance. Unfortunately for General Motors, every time the Corvette managed to set a record and claim some bragging rights over the Viper (usually with the ZR1 package), Dodge/SRT has been quick to come back with the Viper to beat the Corvette’s best time. This has happened at tracks all over the world and most recently, the 2013 Corvette ZR1 beat the Viper’s record at Laguna Seca with a time of 1:33.7. Only a few months later, the SRT Viper TA came out with a handful of weight reduction modifications and a retuned suspension system and beat the ZR1 with a time of 1:33.62. The 2014 SRT Viper TA only beat the 2013 Corvette ZR1 by 8 hundredths of a second but a win is a win.

There are rampant rumors that the 2015 Chevrolet Corvette Z06 will pack a supercharged LT4 engine with somewhere in the area 650 horsepower and if it is truly to be the most track capable Corvette ever, we would guess that it will have some new version of the C6 ZR1’s Magnetic Selective Ride Control system, carbon ceramic brakes, lightweight chassis components and – of course – lightweight body bits that cut weight and improve aerodynamics. The 2015 Z06 could essentially be a newer, lighter, more powerful and more high tech version of the Corvette ZR1. The fact that the Z06 will be lighter and more powerful than the ZR1 (again…this is all in theory) would lead us to believe that the C7 Z06 will have no problem shaving some time off of the Corvette’s best time of 1:33.7 at Laguna Seca. With the specially designed Viper SRT only beating the ZR1 by 0.08 seconds, a substantially faster time by the next generation Z06 should be enough to effectively crush the current SRT Viper lineup including both the track purposed Viper TA and the top of the line Viper GTS (which failed to beat the 2013 ZR1 in the previous testing by Motor Trend).

Now, there is no doubt that the folks at Chrysler’s Street and Racing Technology division can head back to the drawing board to build a new trimline that will offer higher performance than anything currently available in the Viper’s den – presumably something sporting the ACR logo. The Dodge Viper SRT10 ACR from the previous generation of the Mopar supercar set the best time for an American performance car on the Nurburgring and even before the current generation SRT Viper was introduced, it has been assumed that there would be an American Club Racer (ACR) package. The SRT Viper ACR could be the car to step up and defeat the 2015 Corvette Z06 but considering that it will cost more than the $125,000 Viper GTS – the newest ACR could cost almost twice as much as the Z06. The “base” 2012 Z06 before any options started around $75,000 and while the C6 ZR1 cost over $100,000; some people expect that the new Z06 could stay in the $80k range. On the other hand, a new and improved trimline for the Viper that costs more than the Viper GTS that starts around $125,000 (the Anodized Carbon Edition Viper GTS starts at $139k) could have a price in the range of $140,000 so while it might be faster – it will almost certainly be leaps and bounds more expensive. More importantly, you have to wonder how much further SRT can advance the performance of the Viper while maintaining the ability to actually drive it on the street. The 2015 Viper ACR should be the best performing Viper ever but will it be enough to beat the most track capable Corvette ever?

The 2015 Chevrolet Corvette Z06 will make its grand debut at the 2014 North American International Auto Show in Detroit on January 13th so in just over a month; we will have a much better look at the future of the American supercar. Will the 2015 Z06 be the ultimate Viper slayer? Tell us what you think in the comment section below!

Matt wrote on December 11, 2013 - 10:24pm Permalink
The Corvette will come out on top. Mark my words. Viper lacks the refinement and handling of the Corvette. 8 straight championships can't be wrong.
vette9d8 wrote on July 18, 2014 - 10:58am Permalink
I have given this some thought.First of all I am a vette guy through,and through.The Dodge Viper problem is not that it can't beat the vette,but poor management,and direction.In the$150K sports segment you have to be on top of your game.I am talking dual clutch,auto trans,and net suspensions,and even more techno gizmos,traction control,and so,on,and so forth.If you are high tech in these areas?You are spinning your wheels literally.So,that is the reason they have 750 cars gathering dust.You have to have some flexibility,and creativity in these key areas.So,just a matter of time before the car gets axed.Too money spent not enough return.How can the top brass keep spending all that money,and getting nothing in return.Just makes no business sense.Corvette love it ,or hate it,makes sense because they are selling cars,and making money.They are getting return on their investment.