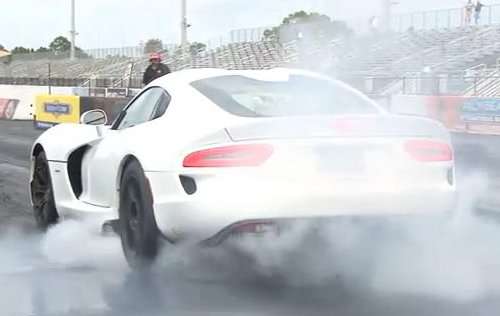 A new video has hit the web showing a 2013 SRT Viper fitted with a set of drag radial tires and piloted by a driver with very little experience in the Viper rocketing down the quarter mile in the low 11 second range – aided by the Mopar supercar’s new launch control system.
Advertisement

This video was published by the folks at DragTimes.com and while we do not know who is driving the 2013 SRT Viper shown in the video, the fact that the car was on loan from SRT leads us to believe that the pilot doesn’t have a world of experience racing in the new Viper. This particular white “base model” Viper has been fitted with a set huge (street legal) Mickey Thompson drag radial tires that help the V10 powered supercar get traction but as an interesting key point, Chrysler has equipped this Viper with tires that are taller than the factory rear wheel and tire combination. A taller tire effectively decreases the gear ratio of the Viper so a new Viper fitted with shorter (but still very sticky) drag tires may be able to turn a better quarter mile time. Regardless of the “shortcomings” of the Viper being tested by DragTimes – they were able to hit a very impressive best time of 11.1 seconds at 127.3 miles per hour.

On that 11.1 quarter mile pass, in addition to a trap speed of 127.3 miles per hour, the 2013 SRT Viper went from 0-60 in 3.1 seconds, 0-100 in 7.1 seconds and getting from 60 to 130 miles per hour took just 8.08 seconds. Those are all very impressive figures – especially when you look at the fact that the people at Motor Trend posted a best quarter mile time of 11.4 seconds for the new Viper although we should note that Motor Trend would have tested the car with the factory stock rear tires. Considering that Motor Trend probably had a better chance to practice with the Viper before posting their best times for comparison to other vehicles, it looks like the DragTimes team made the best use possible of those sticky Mickey Thompson tires.

Assisting the driver in this video is the new Launch Control System of the 2013 SRT Viper which is set to 5,500rpm for the filming. Launch Control allows the driver to pick an “ideal” engine speed so that when the program is engaged, the driver simply has to pull to the starting line, put the clutch in and floor the accelerator. If you did this with a car not equipped with a launch control system, the engine would rev uncontrollably until it hit the fuel cut portion of the rev limiter but the Viper’s launch control system holds the rpm right at the designation range until the clutch is let out. This allows the driver to focus less attention on hitting the ideal engine speed before launching by playing with the throttle – instead allowing the driver to focus on clutch manipulation to yield a perfect launch.

As some more experienced drag racers watch this video of the 2013 SRT Viper running the quarter mile, they will likely notice that the launch could have been a touch better and the shifts could have been a little smoother but I have to point out that the driver of this car jumped in and did what he could with very little seat time. Based on that, I would fully expect that an owner who spends lots of time at the drag strip will be able to get their new Viper into the 10 second quarter mile range with only a set of sticky tires and a bunch of practice. However, even without much practice, a good set of tires and the launch control system should allow even a somewhat novice drag racers tickle the ten second barrier in ideal conditions.

Kudos to the people at Drag Times for turning out some impressive quarter mile times with the 2013 SRT Viper with so little seat time…while also showing how much the new Viper will be capable of with some quality seat time. With new Vipers reaching owners around the country right now – it is only a matter of time before we are watching near-stock Vipers posting 10 second quarter mile times.

Roger W wrote on April 24, 2013 - 9:59am Permalink
Yawn. So last century. Home-built street legal electric cars do better than this regularly. When will Detroit find the 21st century? Before you go insane on the comment - see the White Zombie out of Portland for the proof and check the National Electric Drag Race Assn.