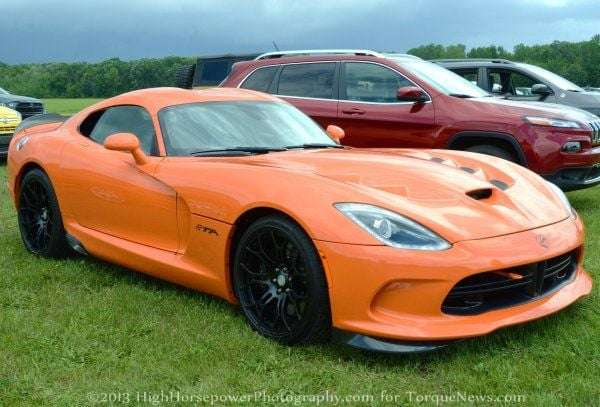 The Chrysler Group’s Street and Racing Technology group has announced the 2014 SRT Viper pricing and the second model year of the new generation Mopar supercar will cost buyers $2,000 more than the 2013 – now bringing the base price of the Viper over the $100,000 figure when you factor in the gas guzzler tax.
Advertisement

The good news for those 2014 SRT Viper buyers who will be paying more than they would have for a 2013 model year Viper is that this price hike isn’t “just because” – as it comes with a list of new standard features.  First of all, the SRT Viper (non-GTS) now comes standard with a 900 watt Harman Kardon audio system with 12 speakers (2 of which are subwoofers) that is fed by an HD Radio setup.  2014 SRT Viper buyers also get standard Navigation with UConnect access and the ParkView Back-up Camera system.  HD Radio, navigation and the back-up camera system were all features of the $2,500 Grand Touring package for the 2013 SRT Viper while the 12 speaker sound system alone added $1,995 so those who wanted these features for 2013 would have paid somewhere in the area of $106,485.  On the other hand, the 2014 SRT Viper with almost the exact same features as the 2013 “base” Viper costs just $103,995 so technically, the new model year offers more value for the price.

The only missing piece of the 2014 SRT Viper pricing puzzle pertains to the track ready Viper Time Attack (TA).  It has been speculated that the Viper TA (pictured above) will have a price that puts it between the base SRT Viper and the Viper GTS as the TA package includes some go-fast goodies from the Viper GTS without the interior niceties that are not needed for track use.  Based only on that, we would expect that the 2014 Viper TA would cost somewhere between the $103,995 price of the SRT Viper and the $126,490 but when you take into consideration the limited edition nature of the Viper TA along with some of the unique features of the package (that are technically borrowed from other packages available for the Viper and Viper GTS), the price of the TA should be closer in pricing to the GTS than the base SRT Viper.

Chrysler has also not announced the option pricing for the 2014 SRT Viper and with the base Viper getting standard features that were previously included in upgrade packages, it will be interesting to see what options exist for the new model year and how much these options – and things like premium paint or wheel choices – will cost for 2014.  With the 2014 models due to arrive over the next few months, it shouldn’t be long before the Chrysler Group has rolled out detailing pricing information for the 2014 Viper lineup.