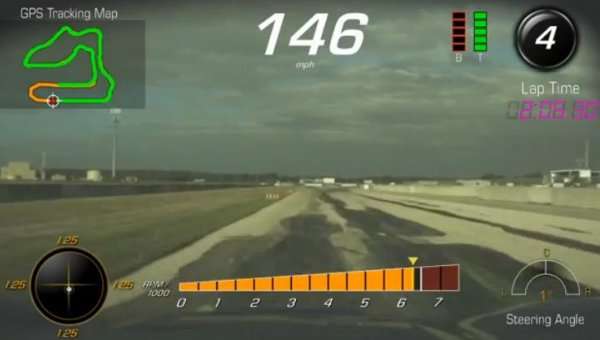 General Motors announced at the Consumer Electronics Show that the 2015 Chevrolet Corvette Stingray will feature an incredible new Performance Data Recorder that will offer drivers an unprecedented look at their high performance driving techniques on the road and track – including track telemetry, a built in video camera system and a readout of your vehicle parameters during the run.
Advertisement

The 2014 Chevrolet Corvette Stingray is packed with high tech gadgets that help make it one of the most impressive sports cars in the world – especially when you consider how much less expensive it is compared to the vehicles with which it competes in terms of performance. The lightweight chassis, the new 7-speed manual transmission, the paddle shifted 6-speed automatic transmission, the Magnetic Selective Ride Control suspension system, the adjustable driver information center and the 460 horsepower LT1 V8 all work together very nicely to make the 2014 Stingray one of the more technologically advanced cars sold in America but the most advanced and most unique feature for the C7 Stingray wont arrive until the 2015 model year Corvettes begin rolling off of the assembly line.

New for the 2015 Chevrolet Corvette Stingray is the Performance Data Recorder. This system combines the efforts of a high definition camera mounted in the windshield header, a microphone system inside of the car and a lightning fast GPS tracking system to create one of the most elaborate on-board timing systems we have ever seen. Seriously, this system offers the kind of information that you would get from a video game like Forza Motorsport 5 or Gran Turismo 6 but it offers that information through the Corvette’s infotainment screen. In the reply mode, drivers can watch the video captured from the windshield camera with an overlay that includes throttle input, braking input, lateral G forces, vehicle speed, gear selection, RPMs, lap timing and even an image of the track on which you are racing. Also, using the Cosworth Toolbox program on your computer or laptap, you can see even more detailed information from your runs and thanks to Bing mapping technology, you can view the exact line that you took around the given track with a comparison feature that shows one lap along with another.

To show the functionality of the new Performance Data Recorder, General Motors has offered up two videos (which you can find below) with one showing the basic playback feature with Corvette racer Tommy Milner walking us through a high speed lap of Sebring International Raceway while the other is a walk-through video of how to use the Performance Data Recorder in the car and on your computer with a member of the Cosworth team which helped GM develop this system.

I think that the Performance Data Recorder is one of the coolest new features in the automotive industry and this is one of those features that I cannot wait to see spread across the industry. Im a huge fan of the basic performance timing systems found in the Ford Mustang and all of the Chrysler Group’s SRT vehicles (along with some of their performance oriented non-SRT models) but the new GM PDR system takes performance timing to the next level. This system will allow every 2015 Corvette owner to record their high performance romps in stunning high definition with a full timing overlay so literally every Corvette owner will have the capabilities to make the same awesome videos that the automakers have been issuing for years.

You know all of those record lap videos showing the Corvette ZR1 or the Camaro Z/28 at the Nürburgring? Now every Corvette owner will be able to make videos just like that…although their times might not be quite as impressive. General Motors hasn’t announced the pricing just yet but this system will be available on all 2015 model year Chevrolet Corvette Stingray Coupes and Convertibles. Since the 2014 and 2015 Corvettes should be basically identical, I would imagine that owner demand will also bring about some sort of retrofitting package so that 2014 Corvette owners can have this incredible piece of technology in their C7 as well.