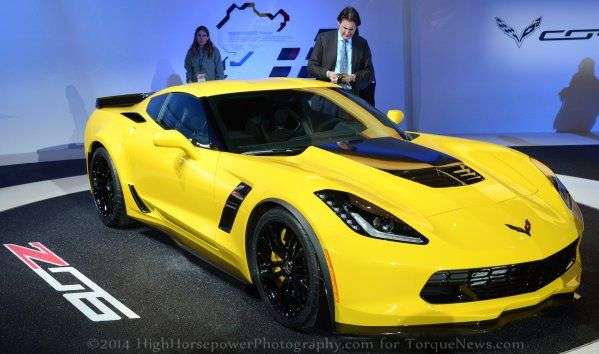 When General Motors promised that the 2015 Chevrolet Corvette Z06 would be the most track capable Corvette of all time, we knew that the new American supercar would be something special and as the company pulled the sheets away we learned quickly that this car was worth the anticipation - as the C7 Z06 is one of the most awe-inspiring American cars ever.
Advertisement

The 2015 Chevrolet Corvette Z06 follows a very long line of incredible performance cars so when GM promised that the C7 Z06 would be the most track capable Corvette ever, we knew that it would make a major splash when we learned everything that we need to know on the new super-Vette. Even though GM has only offered up estimated power figures along with some pretty serious hints as to what the C7 Z06 will do on a race track, this new Corvette proved to be the show-stopper on day 1 of the 2014 North American International Auto Show. Even with estimated power numbers, this was the car at the show which had a steady crowd around it all day long once it was introduced – and for good reason.

As you can see in the images shown here, the 2015 Chevrolet Corvette Z06 puts a more aggressive spin on the styling of the 2014 Chevrolet Corvette Stingray but the new Z06 maintains all of the major aesthetic features that make the new Stingray so gorgeous. The front end of the 2015 Z06 has the same headlights and basic front fascia design as the Stingray but the Z06 has unique grille filler that is promised to allow for much greater air flow to the new supercharged LT4. Along the bottom of the front fascia is a carbon fiber chin spoiler which flows out to flares that all add a ton of attitude while also improving aerodynamics. The front end is dominated by the unique Z06 hood that sits a little higher to allow space for the supercharged LT4 engine.

Along the sides, the 2015 Chevrolet Corvette Z06 wears carbon fiber side sills that are part of the Carbon Fiber Aero Kit (along with the carbon fiber front chin spoiler and flares), larger vents on the front fender with the familiar Z06 badge, rear brake cooling ducts and similar upper quarter panel vents to those seen on the Stingray but on the Z06, those rear cooling vents have a scoop design to pull more air through the integrated transmission cooler.

The rear end of the 2015 Corvette Z06 doesn’t stray all that much from the 2014 Stingray but the Z06 wears dark shaded tail light lenses and a much, much bigger rear spoiler than what is offered on the Stingray. This rear spoiler is said to be part of the Carbon Fiber Aero Kit but it had the Z07 logo stamped into it on the right side. GM has teased us that there will be a Z07 package that includes body bits that will make it even more aerodynamic than the Z06 fitted with the carbon fiber package with the features to be announced at a later date but based on the Z07 stamped into the passenger side of the wing – I would guess that this will be a feature of the Z07 package for the C7 Z06.

That aggressive body rides on a new lightweight aluminum chassis that GM claims is “essentially unchanged” from the chassis used in the new C7.R race car so we can be assured that it is as light as possible. That super strong chassis allowed GM to add a removable roof option for this Z06 but even with the roof panel out, the C7 Z06 is 20% stiffer than the previous ZR1 (that number jumps up to 60% stiffer when the roof is installed). Gigantic 14.3” steel rotors under 6 piston Brembo rotors come standard up front with 4 piston calipers out back but those who opt for the Z07 package will receive similar carbon ceramic discs to those offered on the C6 ZR1 – measuring 15.5 inches in the front and 15.3 out back (these ceramic rotors are 23 pounds lighter, by the way). Those are some serious stoppers and making room for those big brakes is a set of Z06-specific wheels wrapped in P285/30 ZR 19 Michelin Pilot Sport tires up front and 335/25 ZR 20 skins out back with the Z07 wearing the race ready Pilot Sport Cup tires. The suspension system of the 2015 Z06 is a more aggressively tuned version of the Stingray’s suspension setup with the ZR1’s Magnetic Selective Ride Control and electronic limited-slip differential being standard for the new Z.

Now for the best part.

As we expected, the 2015 Chevrolet Corvette Z06 is powered by a new 6.2L supercharged LT4 V8. This mill makes use of a similar integrated supercharger and intercooler setup that rests between the LT4’s cylinder heads but a revision in the design allows this 1.7L Eaton supercharger to spin up to 20,000rpm – 33% faster than the blower on the C6 ZR1. This allows the LT4 to reach peak boost and peak power more quickly so even though the estimated figures for the C7 Z06 of “at least” 625 horsepower and 635lb-ft of torque, the combination of the new engine setup and the lightweight chassis should guarantee that the Z06 will take down the ZR1 head to head on a road course. Thanks to a similar variable valve timing, direct injection and Active Fuel Management setup to the one found in the Stingray, this engine should also be surprisingly fuel friendly when driven gently but who really cares about that? It is going to have at least 625hp!

All of that power is channeled through carbon fiber torque tube to the rear mounted transaxle which – not surprisingly – is offered with either a manual or automatic transmission. The 7-speed unit is similar to the one found in the Stingray but the new 8-speed automatic transmission is not the dual clutch that many people expected. This new 8L90 automatic transmission uses a torque converter, four gear seats and five clutches to deliver what GM promises are wide open throttle upshifts that will be 8 hundredths of a second quicker than the shifts offered by the Porsche 911’s dual clutch unit. 8 hundredths of a second might not sound like much but in a segment where every nanosecond counts – that is a major claim for the old-school transmission technology.

Finally, the cockpit area of the 2015 Chevrolet Corvette Z06 features a race inspired flat bottom steering wheel with the Z06 logo set in carbon fiber with the buyer’s choice of either the GT or Competition seats from the new Stingray. Nappa leather, carbon fiber and other high end appointments fill out the cabin like a European exotic so while being able to beat some of the biggest names in the supercar world around a race track – this new Z06 also offers the same levels of comforts and luxury.

Now it is only a matter of time before General Motors takes the new Corvette Z06 to the famed Nürburgring for what very well could a record setting run for a production vehicle. The only bad news is that GM doesn’t expect to begin selling the 2015 Z06 until early 2015 so those hoping to blast around in the most track capable Corvette or all time this summer might be a little disappointed…but I bet that it will be well worth the wait.

In the meantime, check out the gallery above by clicking any of the thumbnails or the GM video below!