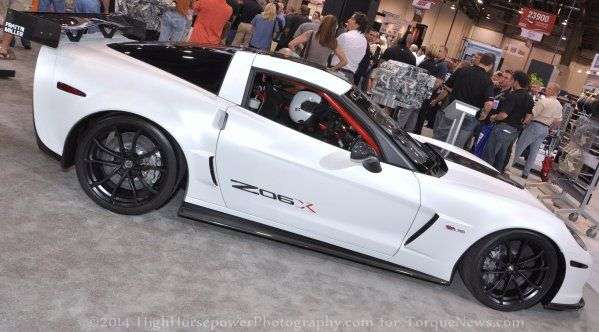 Chevrolet Corvette Z06X Could Be the Fastest American Production Car Ever

Multiple sources have stated that General Motors is working on a race-only version of the new 2015 Chevrolet Corvette Z06 that could be similar to the wicked Corvette Z06X that the automaker showed off in concept form at the 2010 SEMA Show in Las Vegas – and this Z06X could be the best performing American car of all time.
Advertisement

There is a very good chance that the 2015 Chevrolet Corvette Z06 will prove itself as the most track capable street legal American performance car of all time and while GM is only billing it as the most track capable Corvette of all time, it is safe to speculate that it could be the best performing American-built road car ever. Provided that the C7 Z06 is able to turn in better track times than the C6 ZR1 and the 2010 Dodge Viper SRT10 ACR, it will officially be the best performing normal production car ever to hit the streets. Posting better times at tracks around the world including Laguna Seca, Virginia International Raceway and the German Nürburgring than the C6 ZR1 and the Viper SRT10 ACR would allow the new Z06 to stake its claim as the best performing street car but it will be tough for the newest super Corvette to best the Nürburgring time turned in by the Dodge Viper SRT10 ACR-X. The ZR1 turned in a best Ring time of 7:19.63 while the Viper ACR lapped the Nürburgring in just 7:12.13, making it the fastest American car to hit the Ring. The new Z06 may very well be able to shave the 8 seconds that it needs to pass both the Viper and the ZR1 to become the fastest street legal American car to record a time on the Nürburgring but it wouldn’t be the fastest American car ever.

That distinction belongs to the Dodge Viper SRT10 ACR-X, which turned in a Nürburgring lap time of 7:03.06 to sit as the third fastest lap ever run on the 12+ mile road course; trailing only the Pagani Zonda R and the Ferrari 599XX. The “problem” is that the Viper ACR-X isn’t street legal and it was built by the Chrysler Group strictly for racing. Because of that, it isn’t likely that the 2015 Corvette Z06 will be able to claim the title of the best performing American “production based” car ever…unless GM came out with a race-only version of its own and the new Z06 seems like the ideal canvas for that new record setting Vette.

The 2010 Chevrolet Corvette Z06X that debuted as a concept at the 2010 SEMA Show (shown above) featured the standard drivetrain of the 2010 Z06, the aerodynamic and weight saving bits of the Z07 and Carbon Fiber packages, lightweight race wheels, an adjustable suspension setup, a huge rear wing, a full safety cage and composite windows. It was essentially a production Corvette Z06 with all of the available go-fast goodies and all of the added items needed to make it a safety-approved track competitor. Applying this same treatment to the 2015 Corvette Z06 could create a car capable of being the first American car to crack the 6 minute barrier on the Nürburgring.

Start with the new 2015 Chevrolet Corvette Z06 and strip the interior down to the bare essentials. Get rid of the fancy infotainment system, the heated/cooled/power leather seats, the leather lined dash and center console, the advanced climate control system and implant a set of lightweight race buckets along with a roll cage and you have yourself the possible interior setting of the C7 Z06X. Replace the glass windows with reinforced composite racing windows, swap out the Z06 rims for a set of lightweight race rollers, add a more dramatic front splitter, swap in the C7R rear wing and add a race-spec adjustable suspension setup and you have a complete exterior package that offers supreme aerodynamics without going as extreme as the C7R race car. More importantly, this Z06R wouldn’t carry the incredibly high price of the C7R race car so it would be more affordable for those Corvette lovers who want to spend serious time at the track but not in a car intended for the highest level of global racing. This car could very well challenge the Viper ACR-X as being the best production-based American performance car ever...and that is most certainly a claim that GM would love to be able to make.