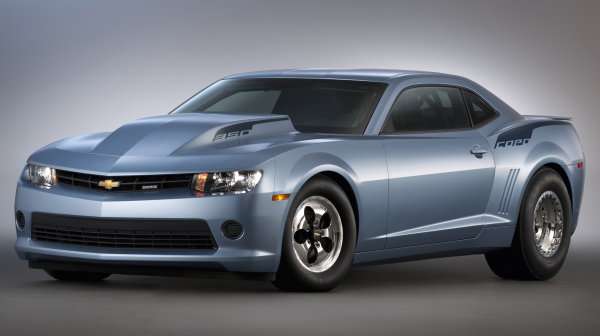 Another high priced Chevy sold this past weekend at the Barrett Jackson Scottsdale auction was the very first 2014 COPO Camaro race car – which sold for an incredible $700,000 with every cent of that money going to a veteran’s charity.
Advertisement

This particular COPO Camaro #1 is powered by the new LS-based 350 cubic inch V8 topped by a 2.9L Whipple supercharger so if the buyer were to take this car drag racing, they can expect to run in the 9 second quarter mile range (if not quicker). Finally, this COPO Camaro drag car is the same car that was used to introduce the 2014 model year COPO package at the 2013 SEMA Show in Las Vegas which means that it is finished in the unique Silver Ice blue paint and this is the only 2014 COPO Camaro that will be painted Silver Ice. This might be one of the fastest GM cars of all time but it is also one of the rarest and most collectable so it doesn’t come as much of a surprise to those ‘in the know’ that this car brought $700,000 at auction.

In addition to the basic upsides to owning 2014 Chevrolet COPO Camaro #1, the winner of this auction also got the pleasure of knowing that his $700,000 will go to a better cause than just filling a very large corporate bank account.

The proceeds of 2014 COPO #1 go to the Achilles Freedom Team of Wounded Veterans. This organization works with wounded American soldiers to help overcome serious injuries including loss of limbs to be able to compete in athletic events like marathons through physical training and special machinery such as hand crank wheelchairs. As part of the auction, a group of members of the Achilles Freedom Team was present for the bidding war, talking a bit about the program and introducing a few of the wounded soldiers who have benefitted from the program.

The video of the auction proceedings for the first 2014 Chevrolet COPO Camaro is included below and, as you can see, the video is not of the greatest quality so it is hard to tell who won the unique factory race car. It looks as though Rick Hendrick is in the bottom window of the video but he lost out to someone in the top window – although I cannot tell who that winning bidder was from the video and an extensive internet search hasn’t come up with anything.

In any case, that unspecified buyer has secured himself an incredible piece of high performance American automotive history while also contributing nearly three quarters of a million dollars to a great cause.

When combined with the 2014 Chevrolet Camaro Z/28 that sold to Rick Hendrick, the GM-provided Camaros at the Barrett Jackson Scottsdale auction raised more than $1.3 million for charity.