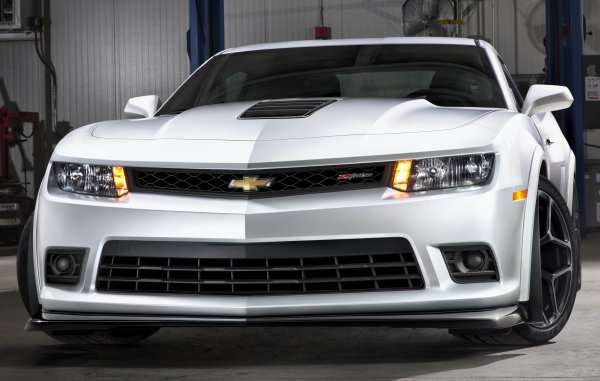 The rights to buy the very first 2014 Chevrolet Camaro Z28 was auctioned off at the Barrett Jackson Scottsdale Collector’s Car Auction this past weekend and when the final gavel sounded – NASCAR team owner Rick Hendrick had laid down a whopping $650,000 for 2014 Z28 VIN 0001.
Advertisement

It has become commonplace for the first unit of a new model to be auctioned off for charity – especially a high performance model – so when General Motors announced that 2014 Chevrolet Camaro Z/28 would be sold to the highest bidder at this past weekend’s Barrett Jackson Scottsdale auction we knew that it would likely bring in big money.

The new 2014 Camaro Z/28 is billed as the best performing Camaro of all time and to back up that claim, General Motors took the new Z/28 to the Nürburgring in Germany where the newest Camaro turned in the fastest lap by any American muscle car ever with a time of 7:37.4.

After the 2012 Chevrolet Camaro ZL1 sold for $250,000 a few years back, I guessed that the right to own the first 2014 Chevrolet Camaro Z/28 would fetch at least $300,000 and while I was correct that it would bring in at least as much as the ZL1 – I was way off in my estimate. Thanks to the generosity and (very) deep pockets of NASCAR team owner Rick Hendrick, 2014 Camaro Z/28 #001 sold for an incredible $650,000. The proceeds of the first Z/28 auction will support the Cornerstone Schools in Detroit Michigan. We have a video of the auction below, showing Mr. Hendrick winning the rights to the first 2014 Z/28 as it happened in Arizona.

As is the case with most of these “first unit auctions”, Rick Hendrick didn’t actually get to take home the white 2014 Chevrolet Camaro Z/28 that served as a stunning piece of eye candy during the auction. Instead, Hendrick will get to configure his 2014 Z/28 exactly how he wants including exterior color and whether or not he wants the optional air conditioning and sound system package.

Once production begins for the 2014 Camaro Z/28, the first unit to roll off of the assembly line will be built to Mr. Hendrick’s specifications before Z/28 #001 is shipped to the NASCAR team owner’s private (and gigantic) collection. Of course, like all of the 2014 Camaro Z/28 coupes produced, Hendrick’s high priced muscle car will come powered by 7.0L LS7 V8 from the previous generation Chevrolet Corvette Z06 with 505 horsepower and 481lb-ft of torque working with the track tuned suspension system, the high performance carbon ceramic brakes and the various aerodynamic upgrades to make this the fastest Camaro ever.

2014 Chevrolet Camaro Z/28 #001 wasn’t the only auction action that involved Rick Hendrick this weekend. Hendrick brought out 21 vehicles from his own collection for sale with reports indicating that the NASCAR legend brought in nearly $1.5 million from the proceeds of those sales.

That is some serious coinage, but Hendrick spent quite a bit more than he made through the various vehicles he purchased. In addition to the $650,000 Hendrick spent on the first Z/28, he also purchased a 1968 Sox & Martin Plymouth Hemi Barracuda drag car for $198,000, a bright yellow 1968 Shelby King of the Road Mustang for $308,000 and the biggie – a collection of classic race cars and their haulers bearing the colors of the famed Snake and Mongoose race pair.

This collection included a pair of custom matching replica race haulers in Snake and Mongoose colors as well as a replica Plymouth Duster funny car and an actual restored Don “The Snake” Prudhomme Plymouth Hemicuda drag race with this quartet costing Hendrick a cool million. All said and done, Rick Hendrick paid somewhere in the area of $2,156,000 for the five cars and two trucks mentioned above.