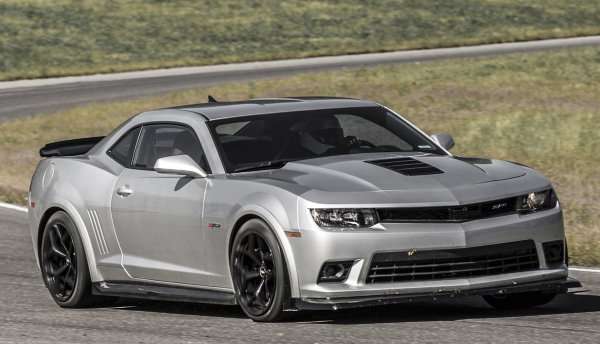 Ford sold more Mustangs in December than Chevrolet sold Camaros but that didn’t stop the General Motors muscle car from winning the muscle car sales race for the 4th straight year – continuing the shutout that the Camaro has had going since it returned for the 2010 model year.
Advertisement

In December 2013, Ford Motor Company moved 5,727 examples of the mighty Mustang while GM sold only 5,015 examples of the 2013 and 2014 Chevrolet Camaro – giving the Mustang its 5th monthly win of the 2013 calendar year. Unfortunately for Ford (but fortunately for General Motors), the Camaro claimed 7 monthly titles in 2013 and far more importantly – Chevrolet sold enough Camaros to best the Mustang by 3,381 units on the year.

Both the Ford Mustang and Chevrolet Camaro posted declines in sales compared to 2012 while the Dodge Challenger actually saw a big increase from 2012 to 2013 but none of those changes made enough of a difference to change the ranking in annual sales. As was the case in 2010, 2011 and 2012, the Chevrolet Camaro moved enough units to be the bestselling muscle car and the bestselling sports car in America for the fourth straight year. 2013 saw 80,567 new Camaros leave the lots while “only” 77,186 Ford Mustangs and 51,462 Dodge Challengers were sold. Although Ford has worked hard to narrow the gap between the Mustang and the Camaro, the Motor Company still fell short from stopping the 4-peat by the bowtie-clad muscle car.

This is a big bragging point both for General Motors and for fans of GM performance but Camaro fans shouldn’t be too quick to talk trash about the fourth straight annual sales title. After all, Ford had crushed the Camaro for ages before the Camaro and the Firebird were both discontinued – although when the Camaro returned for 2010 the Chevrolet fans who cried when the car was killed off were quick to get the modern Camaro to the top of the segment.

The 2014 calendar year will be the biggest test thus far for the Chevrolet Camaro as the 2015 Ford Mustang will arrive in dealerships sometime during the year and at that point – we can expect a huge spike in Mustang sales. First off, dealerships will begin to deeply discount the 2014 model year Mustangs to make room for the 2015 models while the introduction of the 2015 Mustang with a new look will undoubtedly bring a high number of early sales. Together, the deeply discounted 2014 models and the hot-n-fresh 2015 models should combine to account for the highest Mustang sales totals in years so the Mustang will unquestionably have its best shot yet at toppling the Camaro. On the other hand, there are some people in the automotive community who doubt the potential success of the 2015 Mustang and if those people are right, the 2015 Mustang could be a slower mover than expected. This would allow the Camaro a much clearer shot at the 5th straight sales title but I do not believe that there will be anything but a huge rush for the 2015 Mustang when they become available.

Of course, there is also the fact that there is a 6th generation Chevrolet Camaro coming in the near future which will level the playing field with the S550 Mustang so while Ford will have the advantage of being the hot new model (which has been benefitting the Camaro for the last few years), Ford’s advantage isnt likely to last more than a year.