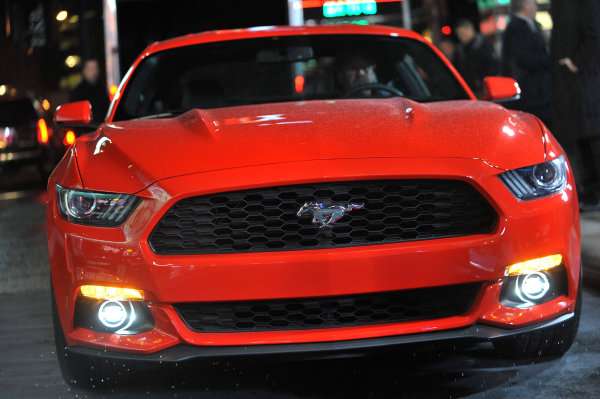 While not everyone is as excited about the looks of the 2015 Ford Mustang as I am, the similarities across the different trim lines could really help sales improve with the two non-V8 models sporting a look that is very much like the GT package – allowing base model Mustang buyers more of the same great looks as the pricier GT models.
Advertisement

When the 2015 Ford Mustang was introduced in six cities around the world on December 5th, we saw a variety of trimlines in the different locations although many people probably couldn’t tell the difference from one new Mustang to the next (with the obvious exception of the 2015 Mustang Convertible). The folks in New York City met the new EcoBoost Mustang while the attendees in Dearborn and Los Angeles met the 2015 Mustang GT but if you looked quickly through pictures from the three US debut events you may not have noticed any difference between the three cars.

The two 2015 Mustang GT coupes were nearly identical to the non-GT model that debuted in New York with the exception of the 5.0L logos on the fenders, the GT badge in the middle of the taillight panel, the heat vents in the hood of the GT model and the aggressive grille design of the Mustang GT. On the EcoBoost Mustang, the GT logo on the tail is replaced by the running Mustang logo, there are no engine badges on the fenders, there are no vents in the hood, there is no rear spoiler and the EcoBoost model features a grille that is all mesh where the GT has mesh and some sharpened “spokes”.

The GT that we met in Dearborn also had different rims than the car that debuted in the Big Apple but in the long run – the only thing that differentiates the 2015 Mustang GT from the non-GT models is badging and the addition of the hood vents and rear spoiler.

In the past, some Ford fans have complained that the less powerful Mustang models looked less powerful. Until very recently, the V6 Mustang had single exhaust where the Mustang GT has had dual exhaust for generations and the front end of the Mustang GT has traditionally had a more aggressive and more elaborate front end with the addition of features like fog lights, chin spoilers, etc.

Because of the difference in the muscular design of the V6 and V8 models, some buyers went elsewhere to buy a car that is not necessarily the most powerful in the lineup but it looks as sporty as the most powerful models. This has changed a bit during the 2010-2014 model years of the Mustang but in past generations the difference between the GT and non-GT models was downright shocking.

Fortunately, that appears to be a thing of the past as, based on what we have seen of the 2015 Mustang thus far there will be very few differences between the different models of the S550 Mustang. The fact that the 2015 Mustang looks just as sporty in the efficient EcoBoost trim as it does the GT trim with over 420 horsepower means that more buyers can have the look that they want while still getting better fuel economy and perhaps even a lower purchase price.

Based on the images offered by Ford Motor Company of the 2015 Mustang coupes that debuted around the US, both the EcoBoost and GT trimlines will have the same aggressive lower fascia, the same high tech looking rear end with LED taillights, dual exhaust and an integrated rear diffuser, the same high tech headlights similarly aggressive wheel options for more than just the Mustang GT. We haven’t gotten a good look at the base 2015 Mustang V6 models but if those models follow suit with the EcoBoost package, every next generation Mustang sold could have the same aggressive design and while that might upset some GT buyers who want to stand out from the non-V8 models – offering the same level of sportiness across the entire lineup should really have a big positive impact on sales of the next generation Mustang.

Click any of the thumbnails above for a look at our gallery comparing the EcoBoost and GT trim lines of the 2015 Ford Mustang.