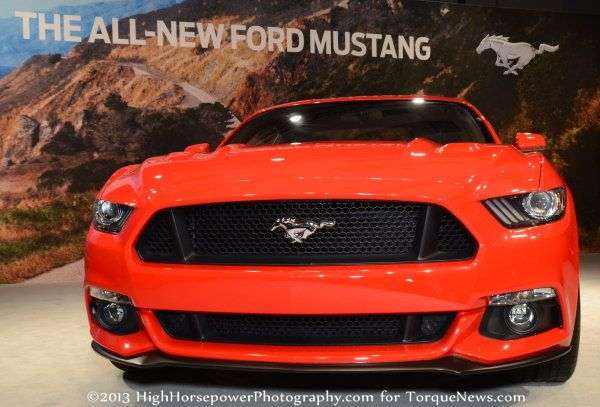 In the past few weeks since it became official that the 2015 Ford Mustang would feature an EcoBoost 4-cylinder engine I have seen countless calls by enthusiasts to do away with the 3.7L V6 option since the EcoBoost offers similar power and better fuel economy but that would be a move that would almost certainly cost FoMoCo some sales.
Advertisement

The 2015 Ford Mustang will come with a pair of non-V8 engines with the return of the 3.7L V6 and the introduction of the new 2.3L EcoBoost 4-cylinder. Official power figures haven’t been announced just yet but the estimated numbers from Ford suggest that the 2.3L EcoBoost and the 3.7L V6 will have similar power numbers in the range of just over 300 horsepower. We can expect that the EcoBoost will have quite a bit more torque than the V6 while also offering better than the 30mpg that is returned by the V6 Mustang,. When looking strictly at the two engines on paper, it doesn’t make much sense for Ford to offer two engines that are so similar in their capabilities so why not kill off the aging V6?

The 3.7L V6 engine that will power the base model 2015 Ford Mustang is an “old” engine featuring very little cutting edge technology. On the other hand, the 2.3L EcoBoost coming to the 2015 Mustang is a brand new engine with very fresh technology and that hot technology comes with a bigger price. If you look at any model offered by Ford Motor Company across the Ford or Lincoln brands, EcoBoost engines are always either a mid level or premium engine option and while there will certainly come a time when there are pure base model EcoBoost vehicles in the Ford lineup – the technology is still new enough to demand a premium price. Because of that, every vehicle in which Ford offers an EcoBoost engine also has a lower cost engine option for those who want the least expensive model possible.

At one point, the base model engines in vehicles like the Ford F150, the Ford Explorer or the mighty Ford Mustang were the least expensive while often being the most efficient but the introduction of EcoBoost technology across the Ford lineup has made these turbocharged models the most efficient and – in many cases – among the most powerful. That combination of power and efficiency comes with a price and that added price is what makes these EcoBoost’d vehicles too expensive to exist as base model engines.

If Ford was to remove the V6 engine option right away, the base price of the 2015 Mustang would likely climb by at least a couple thousand dollars. The 2014 Mustang V6 base model has a starting price of $22,510 while the least expensive Mustang GT starts at $31,210. The EcoBoost model will almost certainly fall between the V6 and the 2015 Mustang GT when it hits showrooms so based on current prices (which are likely to change for the 2015 models), the EcoBoost will likely cost somewhere in the area of $25,000-26,000 if the EcoBoost package costs $2,500. While most buyers upgrade from the base price of the V6 Mustang, most of those buyers are enticed to visit the dealership by that low $22,510 price tag. If you visit your local Ford dealership you aren’t likely to see many 2014 Mustang coupes on the lot with that base price but the fact that someone CAN get a Mustang for that price is what draws people into dealerships. Once there, they often spend far more than that original value when they upgrade to the Mustang GT or even to the more loaded up V6 packages.

Even if the take rate for the 3.7L V6 version of the 2015 Ford Mustang is incredibly low and the take rate for the new 2.3L EcoBoost is incredibly high, Ford would be smart to continue offering the V6 models for those folks who want the least expensive Mustang possible regardless of the power or fuel economy – and that low price helps generate sales even when the models that carry that price are slow sellers.

That all being said, the V6 option in the Ford Mustang is sure to be around for those very reasons for years to come. Once the cost of EcoBoost technology has come down, we could see a turbocharged 4-cylinder Mustang with the same low price as the V6 models but in the meantime, the V6 model will continue to serve as the budget option while those who want the power and efficiency of the new EcoBoost drivetrain will pay a premium.

Fordman wrote on January 3, 2014 - 5:54am Permalink
Well in that case the V6 should be scrapped to avoid the car becoming too common. Ford should look to increase its profits through optional extras.
JohnG wrote on January 4, 2014 - 2:56pm Permalink
Ford needs a stripped down base model to get people into the showroom, plus their rental fleets are mainly v6 to maximize sales. I have a suspicion the ratio of v6 to v8 Mustangs on the road would surprise many as the lower priced less power option is still a solid value and performer. I don't think Ford would think "too common" as a bad thing, sales are sales in this competitive industry and they'd love for everyone to be buying a mustang.... all my opinion obviously. I like the 2015 look, the fastback is awesome and the global brand move with the front redesign is purely business so you take it with the good (interior, suspension, ecoboost, refreshed v8, push button start, modern redesign, lower/wider).
Fordman wrote on January 5, 2014 - 6:29am Permalink
Yeah, point taken, sales are sales, but maybe it's in Ford's interests to give the Mustang some exclusivity. Will you still feel special about the 2015 Stang after seeing a million of them on the streets? Anything becomes boring once you've had too much. Can everybody afford a Corvette? The 2015 Mustang could be a 'halo' car helping to sell Ford's more common products such as the Fiesta, Focus, Escape etc.
thegarbear05 wrote on January 3, 2014 - 8:34am Permalink
its a mustang and the only thing a mustang should have is a 5.0
1FASTSOFA wrote on January 4, 2014 - 2:39am Permalink
The 3.7 makes more hp than the previous 4.6 V8 in the S197 and any previous 4.6 before that. I owned a 08 4.6 for four years and it took a blower and 4.10's to make it reasonably fast. That 3.7 can and does make a lot of power for it's size and technology to back it up. American Muscle put on in the 11's (1/4 mile) already. It packs plenty of punch. Not as much as the new 5.0 obviously, but it also does not cost as much.
yijtzwtt wrote on January 11, 2014 - 12:35am Permalink
If buying a mustang requires you to keep the price as low as possible, ie, opt for the v6, then maybe avoid being "car poor"and buy a cheaper car.
Jacob wrote on January 11, 2014 - 5:22am Permalink
The 3.7L V6 is not "old technology". It's a relatively new engine designed in the last decade and debuted in 2010. Also, the lack of certain modern features, are actually by design. Ford engineers explained once that they did not put DI into 3.7L on purpose, because without DI they're able to exploit optimizations that otherwise wouldn't be available. Personally, I also would like the 3.7L to stay. The 2.3L is better is just pure marketing. To achieve the 300HP horsepower it will need to use premium fuel, while the 3.7L gives the same power with regular. Moreover, as experience shows with other ecoboosts, the 2.0L EB in Fusion is _slower_ than competing cars with 3.5L V6 while using _more_ fuel. Why does Ford push EB down our throat? Because Ford figured out how to game the EPA tests with ecoboost engines. They get great scores because the EPA highway test is done at pretty low speeds, when turbo is barely spooling. But once you go on highway and drive at 75mph, the turbo will be spooling and mpg will take a hit.
John McMullen wrote on January 30, 2014 - 7:51pm Permalink
I have a 2014 v6 convertible with 6 speed manual and find it very impressive. It's certainly the best base engine ever used in a Mustang, and I'm glad it will be continued. The Ecoboost sounds interesting and cool that it is same size as the mid 80's SVO, but with 100+ more horsepower. Although the Ecoboost will have similar numbers as the 3.7, the delivery will be much different, and always some turbo lag is inevitable. So the more engine choices the better...
Steve T wrote on March 25, 2015 - 4:56am Permalink
I just bought a 2015 Mustang V6. I have put 500 miles on it so far. Had a Lexus IS250 AWD before that then a 2007 Corvette convertible before that. I think it's a great car. I will make it an excellent car. The only thing I will do to it in the near future is put an intake on it along with another exhaust-maybe Borla because the sounds on the YouTube video about it was just awesome, then obviously make sure that it's repeogrammed to optimize the air fuel ratio. An extra $1,000 and will now have more power than the stock 4cyl turbo and will have saved some money while still keeping the respect of not having a 4cyl Mustang. That just doesn't even sound right in the same sentence. 4 cyl-Mustang.
Mark C wrote on May 20, 2015 - 11:07am Permalink
I agree with Steve - who wants a 4 cyl Mustang?? The V6 is smooth and power is always there when needed. I loved my 2011 V6 Mustang and my 2015 V6 Mustang is even sweeter. I had no desire for a turbo 4 with more things to go wrong, The V6 is pure. And by the time you are done making up for the extra cost of the turbo vs a few more miles per gallon - you're looking at 5-6 years just to break even anyway!