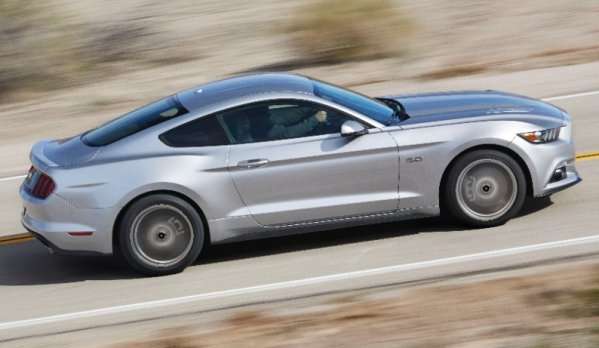 While we have all been preoccupied with the look of the 2015 Ford Mustang it seems that we forgot to really look closely at the performance of the S550 outside of the new EcoBoost engine option but even without a big boost in power – the 2015 Mustang lineup should be the best performing generation in the car’s 50 year history.
Advertisement

Now before we get into why the 2015 Ford Mustang will almost certainly be the best performing Mustang of all time, I should clarify a few key points. First, we are talking about the lineup as a whole from the base V6 to the new Mustang GT and while there will almost certainly be a higher performance Shelby or SVT model arriving in the near future, this discussion pertains to the high volume “normal” models. Second, this isn’t about the 2015 Ford Mustang being the most powerful lineup from top to bottom even though the combination of the 3.7L V6, the 2.3L EcoBoost and the 5.0L V8 do make the 2015 Mustang the most powerful collection ever. Today we are talking about more than just being the most powerful Mustang or the fastest Mustang lineup in a straight line as with the 2015 Mustang – Ford wanted to exorcise all of the demons of the legendary pony car’s past.

Although the Ford Mustang has always been one of the biggest names in American performance cars, it hasn’t always received the credit that it deserves in terms of handling properties. For a very, very long time, the Mustang was regarded as a car that was built simply to go fast in a straight line and while some of the people who poked fun at the Mustang’s ability to carve out the turns may have been right back in the day, the 2012 and 2013 Boss 302 went a very long way in showing that the Mustang was more than just a drag racer. The modern Boss 302 maintained all of the features that make the Mustang the Mustang but tweaks in the suspension made that limited production pony car one of the best handling models of all time (only to be challenged by a few SVT and Shelby models). That Boss 302 was offered in standard street form and a more extreme Laguna Seca version and it was that second version which Ford engineers used as a handling benchmark when designing the 2015 Mustang. Provided that the 2015 Ford Mustang GT can outpace the Boss 302 Laguna Seca on a road course it would effectively be the best handling “normal” Mustang of all time and according to a representative from Ford Motor Company – the 2015 Mustang will turn better times on the Laguna Seca road course than did the special edition Boss 302 that wore the track’s name.

The key advantage for the 2015 Ford Mustang being the best handling Mustang of all time is the same independent rear suspension setup that has been a hot topic since it become official. The Mustang has traditionally had a solid rear axle that was ideal for drag racing but it has put the fabled Ford pony car at a disadvantage when tackling a track with turns. Ford spent a tremendous amount of time and effort to make the modern Boss 302 so incredible on a road course with the solid rear axle so taking what they learned from the 2012/2013 Boss program and applying it to a new chassis that features independent suspension should pay off in a big way. Ford believes that these efforts will allow the 2015 Mustang GT to beat the 1:39.5 lap time turned in by the Boss 302 Laguna Seca at the Mazda Laguna Seca raceway which means that not only will the S550 Mustang GT be the best performing “normal” Mustang of all time – it will very likely rival many of the special edition Mustangs including a great many SVT and Shelby models. It should be noted that this “quickest” Mustang GT will likely feature a special Track Pack option with bigger brakes, lighter rims, stickier tires and perhaps even some minor suspension revisions but it will still be your normal, everyday Mustang GT.

Best of all, since the chassis and suspension changes to the 2015 Ford Mustang are similar whether you buy the base V6 model, the mid level EcoBoost package or the top of the line Mustang GT – all of these new pony cars should offer incredible handling attributes in addition to the basic straight line capabilities that we have come to know and love so much. This means that while buyers of the non-V8 2015 Mustangs won’t be able to lay down the same stunning quarter mile times as GT owners – they will still be able to enjoy very similar (if not identical) cornering capabilities as the V8 models.

Should this be the case, the 2015 Ford Mustang lineup will be the most powerful, the most efficient and the best handling Mustang family of all time – figures which will likely make many critics of the new look forget about not liking the headlights.