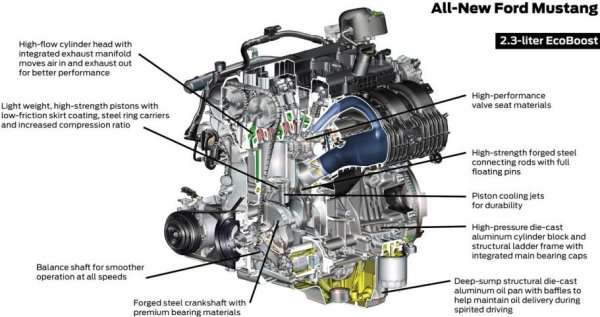 While the Motor Company was fairly vague when discussing the powertrain specifications for the 2015 Ford Mustang, they did announced that the 2.3L EcoBoost 4-cylinder engine would be offered and that it will indeed make at least 300 horsepower and 300lb-ft of torque – confirming my speculation from earlier this week and making the already impressive Mustang engine list even better.
Advertisement

The 2015 Ford Mustang will be offered with three different engines and two transmissions and while we will talk about the other engines and the transmissions in a bit, the biggest piece of drivetrain news focuses on the new 2.3L EcoBoost 4-cylinder.

This EcoBoost’d Mustang engine is the first Ford product to feature a low-inertia twin-scroll turbocharger which allows the turbo to “spool up” faster thus helping the 2.3L motor deliver the available power as quickly as possible. This little turbo engine also utilizes direct fuel injection and twin independent variable camshaft timing to deliver incredible power and what we expect to be just as incredible fuel economy. While it hasn't been specifically stated, we expect that all of these engines and transmissions will be offered in both the 2015 Mustang Convertible along with the Coupe.

Ford has quoted any concrete figures but they promised that the 2015 Ford Mustang EcoBoost package will offer at least 305 horsepower and 300lb-ft of torque. Even if they “only” hit 305 and 300, that incredible torque output should make this engine far more engaging to the driver than the entry-level 3.7L V6. We can expect the EcoBoost engine to be an upgrade over the base V6 and while will likely cost less than the 5.0L-powered Mustang GT, a moderate enough price hike for the EcoBoost option should make it the easier choice for those buyers who arent opting for the 5.0L V8.

Speaking of the 3.7L V6 and 5.0L V8 – both of those engines will return from the current model year to power the 2015 Ford Mustang. The 3.7L V6 will continue on with only minor changes but those changes may allow at least some improvement in power but Ford only expects to hit similar figures to the 3.7L mill in the current Mustang.

On the other hand, the 5.0L V8 has gotten a collection of new features larger intake and exhaust valves, revised intake and exhaust camshafts, stiffer valve springs, new cylinder head castings with more direct intake paths, redesigned pistons, forged connecting rods and a new forged crankshaft. While not all of those items will help make the 2015 Mustang GT more power, they all work together to make the V8 powerplant more durable. All said and done, this revised 5.0L allows the 2015 Mustang GT to hit a stock speed of 155 miles per hour.

All three of the 2015 Ford Mustang engine options will be offered with either a 6-speed manual or 6-speed automatic transmission and new for 2015 is the addition of steering wheel-mounted paddle shifters on all models fitted with the manual transmission.

Based on the few bits of data which are available right now, the only thing that could prevent the EcoBoost engine in the 2015 Ford Mustang grossly outselling the base V6 would be the price. Should Ford be able to make the EcoBoost option a fairly small upcharge, this is an engine that should sell like crazy with what will likely be an incredible mix of fuel economy and power. Of course, for my money revised 5.0L V8 with power guaranteed to top the current (2014) Mustang GT would be the easy choice but those buyers who want better fuel economy and an exciting daily driver – the EcoBoost should be like a dream come true.

This story about the EcoBoost 4-cylinder Ford Mustang Engine is updated on May 18, 2018.