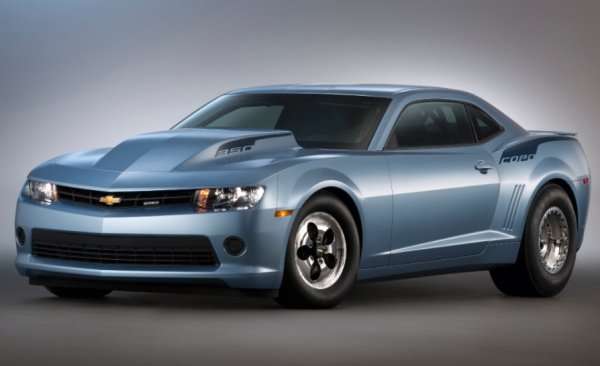 The folks at Hagerty Insurance have recently announced their list of the top ten future collectable vehicles for the 2014 model year with both the 2014 Chevrolet Corvette Stingray and the 2014 Chevrolet COPO Camaro making the widely diverse list of models that will be sought after a few decades – with one peculiar vehicle tossed into the mix.
Advertisement

Each year Hagerty Insurance puts together the Hagerty Hot List that recognizes those models from the current model year which the classic car insurance company expects will be highly sought after collectibles in the distant future. In much the same way that a 1969 Ford Mustang Boss 429 is sought after in today’s vintage car market, Hagerty believes that these ten models from 2014 will be looked at in a similar light decades into the future. To be considered, the vehicles on this list need to be offered for the 2014 model year and they have to come with a price tag under $100,000.

General Motors was one of two automakers with more than one vehicle on the list as Hagerty pinned the 2014 Chevrolet Corvette Stingray and the 2014 Chevrolet COPO Camaro as two models from the current model year that will be hot collector’s items in the future. Realistically, the 2014 Stingray is a no-brainer that anyone would agree with as it is the first edition of the C7 Corvette generation. The 2014 COPO Camaro is a little more of a surprise considering that it isn’t street legal but with just 69 units – much like the 2012 and 2013 COPO Camaro race cars – this car is practically a collector’s item when it rolls off of the assembly line. It should probably be noted that General Motors also has the two best performing cars on the 2014 Hagerty Hot List with both street and track cars covered. Impressive.

The Chrysler Group also had two vehicles on the list but honestly, I have to question one of them relative to the rest of the vehicles on the list. The first is the 2014 Dodge Challenger Shaker and I don’t question this one bit. The newest Hemi powered Mopar muscle car brings about the return of the awesome Shaker hood – with a large hood scoop mounted to the engine and poking through a huge hole in the hood. This car packs all of the high performance awesomeness of the “normal” Dodge Challenger R/T but it brings with it some vintage flare. The other vehicle – and the one that I have to question – is the 2014 Jeep Wrangler Rubicon X. Don’t get me wrong…the Wrangler is one of the bestselling SUVs in the history of the segment and it is one of the most offroad-ready vehicles sold in the country. However, Jeep sells a ton of them every year and the Rubicon X is really just a dressed up Wrangler. Hagerty surely knows better than I do but the Wrangler is definitely the oddball on the list.

The Fiat Group has two vehicles on the list as well with the new Maserati Ghibli S and the new Alfa Romeo 4C. Each of these Italian performance models have their own special pros and cons with the 4C being one of the best performing 4-cylinder models ever while the Ghibli S introduces a new, smaller option to the luxury brand while still offering great performance.

Ford Motor Company got into the action with the new Fiesta ST, a subcompact 5-door that offers incredible performance and impressive fuel economy.

The Nissan 370Z NISMO is the only Japanese car on the list but with the growing popularity in classic Japanese sports cars, the 370Z NISMO is likely to become a cult classic years down the road.

The sole German car on the list is the BMW M5 and with a monster twin turbocharged V8, a manual transmission and all of the high end luxury that you would expect from a modern BMW – the ultimate driving experience will still be appreciated in the year 2040.

Finally, the top of the 2014 Hagerty Hot List is the new Jaguar F-Type R. Hagerty calls the new F-Type “Jaguar’s triumphant return to sports cars” and I am inclined to agree. This is the kind of Jaguar from the vintage years that has become the most sought after by British motoring fans and I fully expect this new F-Type to steal a place in the heart of Jaguar collectors around the world.