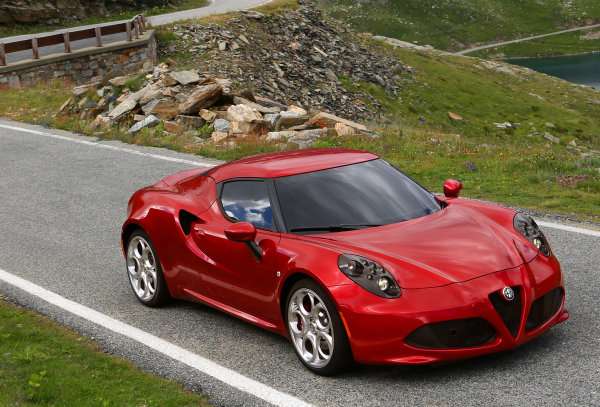 The Alfa Romeo 4C Laps the Nurburgring in 8:04

The upcoming 2014 Alfa Romeo 4C compact sports car recently made a trip to the Nurburgring and turned a very impressive best lap of 8:04 – making it one of the fastest production road car to ever lap the famed German road course while also ranking alongside some of the biggest names in the sports car world.
Advertisement

The 2014 Alfa Romeo 4C is powered by a 1.75 liter 4-cylinder engine that packs just 240 horsepower and while this car is very lightweight, that low power figure leads many go-fast fans to question its place in any discussion about a premium modern sports car. However, with a time of 8:04 on the Nürburgring Nordschleife putting the 4C among cars like the Audi R8 and the Porsche Cayman S, the car considered by many to be a mini Ferrari has shown that it is indeed one of the top sports cars sold in the world today.

Want a little more insight into what the Alfa Romeo 4C could beat around the ‘Ring? Well, the 1997 Dodge Viper GTS takes at least 8:10, the Mitsubishi Lancer Evolution IX takes 8:11.16, the BMW 1 Series M Coupe takes 8:15 and the 2010 Chevrolet Camaro SS takes 8:20. The 4C would probably give most of those cars a heck of a run in the quarter mile as well, based on the early 0-62 times for the Alfa.

Even more impressive is the fact that the Alfa Romeo 4C is expected to carry a starting MSRP of just $54,000. That price makes it slightly more expensive than the base model 2014 Chevrolet Corvette Stingray Coupe of $51,995 but with the add-ons quickly taking the C7 Vette well north of $60k, the actual average selling price of the 4C could end up being below that of the new Corvette. GM hasn’t announced a Nürburgring time for the new Stingray but we know that the V8 powered Chevy can hit 62 miles per hour in just 3.8 seconds while it takes the new Alfa 4.5 seconds. More importantly, the Alfa 4C is substantially less expensive than the Porsche Cayman S that starts at $63,800 while also offering better 0-62 performance than the Cayman S hits 62 in 4.7 seconds. In short, the upcoming Alfa Romeo 4C should be one of the best overall performance cars sold in the United States with a price comparable to the more affordable true sports cars already on sale.

It should be noted that there is one 4-cylinder powered, street legal car that has made it around the Nürburgring in the form of the Caterham R500 Superlight but that ultra rare race car turned street car only beat the full production Alfa Romeo 4C by 9 seconds with a time of 7:55. The Caterham starts at $61,057 before any delivery fees so while this race ready roadster is a shade faster than the 4C – it is also quite a bit more expensive while also being far less functional with its open wheel and open air design.

Finally, in addition to being incredibly fast around one of the world’s most demanding road course, the 2014 Alfa Romeo 4C offers this high level of performance and reasonable price with an interior layout that is fitting for a modern Italian sports car. The 4C will feature an interior layout that is reminiscent of the Ferrari lineup but it does so for a price well before anything wearing the Prancing Horse.