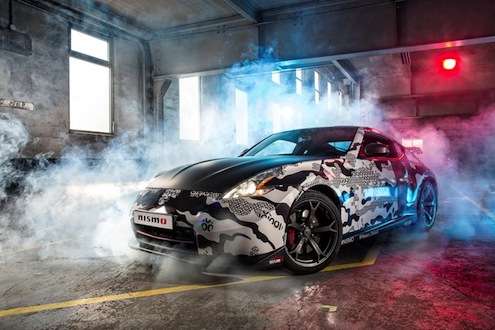 Nissan 370Z NISMO is the hottest Z in the world

One of the most hotly-anticipated new cars, the 2014 Nissan 370Z NISMO is a performance car enthusiasts dream. See where it’s making its dynamic road debut.
Advertisement

Imagine driving 3,000 miles (5,000km) through 13 countries in one of the most hotly-anticipated new cars of 2013. That’s the kind of road trip that performance car enthusiasts dream of doing. The lucky guys at L'Ecurie and Intersection Magazine will get to test drive the new 2014 Nissan 370Z NISMO as it makes its dynamic global road debut. What is Nissan doing to draw attention to the new 370Z NISMO?

The team will get to drive the 370Z NISMO performance car in a seven-day, 3,000 mile event route that goes through 13 countries across Europe as they participate in the 2013 Gumball 3000 Rally. The event is a non-competitive, pan-European parade of the world's most exciting and desirable cars. The team will start in Copenhagen on May 18, 2013 as they get behind the wheel of the new 2014 Nissan 370Z NISMO. What better way to get the newest NISMO in front of millions of people?

Millions of European spectators are expected to line the route to get a first glimpse of the exciting new 370Z NISMO in action. The hottest Z performance car was first previewed in Barcelona in January, and the Nissan 370Z NISMO made its debut at the Geneva Motor Show in March. So just how hot is this new 370Z NISMO and what sets it apart from the standard Z?

The new 370Z NISMO is powered by a modified 350-hp six-cylinder engine, and features a bespoke chassis tuned to deliver a sharper and even more engaging driving experience. The hottest Z in the world is capable of accelerating from 0-100kp/h in just 5.2 seconds, the new Z follows in the tracks of the first NISMO model to arrive in Europe, the Juke NISMO. And Nissan has just announced the the fastest-ever GT-R NISMO that will make its global debut next year in Tokyo.

The NISMO Brand is growing

Nissan's Motorsports brand, NISMO, is growing and changing beyond the racetrack. The performance car will be driven through Europe by Intersection Magazine contributors Patrice Meignan and Jeremy 'Jey' Taltaud. The Nissan 370Z NISMO features a special camouflage livery designed specifically for the event. The Gumball 3000 event is the perfect way to showcase the hot new 370Z NISMO.

Gareth Dunsmore, Nissan in Europe General Manager says, "Gumball is a great fit for the 370Z NISMO: it's a road rally which allows thousands of fans to get up close to their dream cars. Making exciting cars accessible is at the heart of the Nissan brand, and with our innovative NISMO.tv platform on YouTube our customers will be able to keep up to date with its progress, so we can't wait to take part in this historic parade."

Kicking off in Copenhagen on May 18 the rally will run until May 25, concluding in Monaco at the Formula 1 Grand Prix De Monaco 2013. Fans can follow the action on NISMO.tv where a daily video post containing highlights of the previous day's action will be available. And Nissan also announced a new innovative experimental race car will be launched at next years event that will feature electric technology. Stay tuned.

The 370Z NISMO is now in its second generation in the U.S., with this newly revised 2014 Nissan 370Z NISMO set to go on sale this summer.