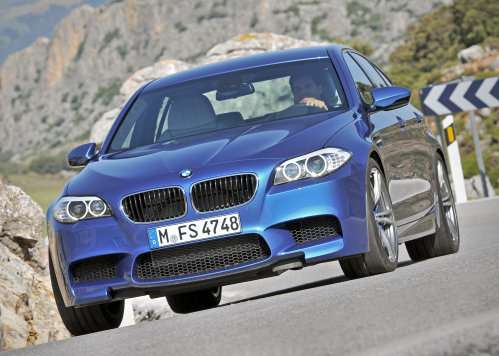 Even though the horsepower war raging across the global automotive industry is all about having a few more ponies than your nearest competitor, the act of underrating your big dogs is as popular now as it was in the 1970s – with the most recent news of a production car making more power than advertised being the 2013 BMW M5 sedan.
Advertisement

The 2013 BMW M5 is powered by a twin turbocharged 4.4L V8; an engine that is supposed to offer 560 horsepower and 500lb-ft of torque. This output makes the new M5 one of the most powerful sport sedans in the world but according to the folks at the BMW enthusiast community BimmerBoost, the M5 is more powerful than advertised – a whole lot more powerful.

A dyno sheet posted with the test results of a factory stock US-specification 2013 BMW M5 shows that the high performance sedan puts 527.18 horsepower to the ground around 6,600rpm with the peak torque measuring 476lb-ft right around 3,200rpm. Mind you, that is power at the wheels whereas stated horsepower is at the crankshaft but compared to the stated figures of 560hp and 500lb-ft of torque – the actual power at the wheels seems to be a bit higher than they should be. The difference between the stated horsepower figure of 560 and the power at the wheels of 527 means accounts for only a 6.3% drivetrain loss while the torque lost is only around 5%. The industry standard that is typically used for a rear wheel drive car in terms of expected “loss” between the engine and the wheels is 15%, which would suggest that the M5 should put around 476 horsepower and 425lb-ft of torque to the rear wheels. This means that the 2013 M5 is either the most efficient vehicle ever in terms of drivetrain losses – or the German automaker underrated the power output of their super sedan.

If we apply the 15% rule to the actual rear wheel output of the 2013 BMW M5, it indicates that the twin turbo V8 is making somewhere in the area of 620 horsepower…a whopping 60 more than advertised. Keep in mind, this 15% rule is far from perfect but even if we assume that the 2013 M5 offers an incredible 10% drivetrain loss, 527 rear wheel horsepower still equates to 586 horsepower at the crankshaft. There is a chance that the dual clutch gearbox at work in the M5 is incredibly efficient so the new high performance sedan could prove to have legendarily low drivetrain losses but even with 10%, we can see that the twin turbo V8 is underrated.

Now, there will certainly be some skeptics out there who will claim that the car could have been slightly modified or the dyno wasn’t set up properly but with BMW packing a few more ponies than advertised into some newer vehicles – it is by no means out of the question that the new M5 sedan could offer closer to 600 horsepower. Some of you out there might be asking yourself why an automaker would want to intentionally underrate a vehicle like the new M5 and while this is an act that has become an industry norm – there are many different reasons why it has been going on for the last 40 years.

The most substantial possibility is that automakers want to make very sure that their vehicles (especially highly touted performance models like the new BMW M5) offer every bit of the level performance expected from the consumer and that includes comparisons to their competition. Say that you drive a “560hp” BMW M5 that blows the doors off of some other vehicle that offers 560 horsepower. That appears to be far more impressive than a car with an advertised output of 600hp beating a 560hp car. Also, underrating a car’s power output prevents any scandalous discussions about the car not making good on its promise of packing a certain level of power in the event that a vehicle is tested in less than ideal conditions.

Another reason that underrating horsepower has been done for years is that in many cases, it costs less to insure a car with less horsepower so a 560 horsepower BMW M5 would (in theory) be less expensive to insure than a 620 horsepower M5. Granted, the difference in those two rates should be negligible to most M5 owners but that is one small advantage of advertising lower than realistic power figures. Honestly, no consumer is going to complain about getting more power than they expected while also paying lower insurance premiums.

In any case, it appears for now as though the 2013 BMW M5 sedan coming to the US this summer is even more awesome than we expected. Now that one source has come out stating that the power is underrated (and significantly so), we can expect to hear of more dyno tests as more people and shops get their hands on the new US-spec M5.

Tesla Contemplates A New Strategy for China Retail even As Sales Boom
Jay Leno on Elon Musk & EVs: “I Think He Should Get ... Credit"
END_OF_DOCUMENT_TOKEN_TO_BE_REPLACED