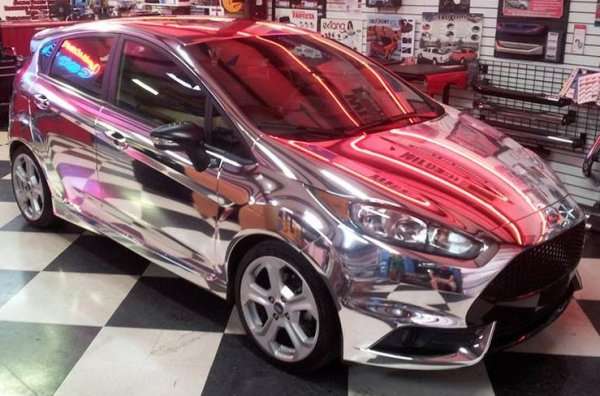 Check Out the Ford Fiesta ST Wrapped in Chrome

There is a small fleet of 2014 Ford Fiesta ST hatchbacks driving around America as part of the most recent chapter of the Fiesta Movement and in an effort to make his hot Ford hatch unmistakable – Fiesta Movement Agent Michael Berenis had his Fiesta ST wrapped in chrome vinyl.
Advertisement

If you recognize Michael Berenis’ name, he is the same Fiesta Movement Agent who was responsible for taking his 2014 Ford Fiesta ST to the drag strip back in September, marking the first time we have seen the American ST in action on the quarter mile. This month, Michael set forth to make his Fiesta ST unique and with the popularity of vinyl wraps – Berenis opted to cover his hot hatch in pliable chrome. With the direction of Michael’s friend William Champlin, he turned to Designs by Mophead in Spring Hill Florida to transform the Fiesta ST from a bright green machine into a chrome dream with Matty "Mophead" Barkley spending three weeks taking the Fiesta ST apart to thoroughly wrap every inch of this hatchback in bright chrome vinyl. Unfortunately William Champlin passed away during the project so he never got to see the finished product but without his help, this gleaming product that you see here may never have come to volition.

"When I first saw the car, I was amazed at how beautiful it turned out. The work by Designs by Mophead was amazing, and nearly flawless in every way. His custom design with black shadowing really brings out the lines the designer originally intended. The front end is spectacular, and reminds me of a high dollar exotic; that's without the chrome and custom work,” said Michael Berenis. “This wrap brings out those qualities even more! What is it like to drive? Driving this car is a whole other story, and at every intersection it is surely the topic of discussion. The first day I picked it up, and I had to stop and get gas. Literally, a crowd of people formed around me and they were asking questions and taking pictures of the car. Driving a car like this makes you feel like a rockstar! Cruising down the highway, people are constantly pulling out their phones and snapping pics and video. I'm sure you will be seeing this car pop up all over the web."

Now, some of you might be looking at this chrome clad 2014 Ford Fiesta ST and wondering “is that legal”?” Berenis thought of that before pulling the trigger to have the car wrapped in chrome and he checked with the Florida State Highway Patrol, explaining what he wanted to do and making sure that this chrome covering wouldn’t get him or his chromed out Ford locked up. It turns out that while some states have laws against cars that are this reflective, Florida (where Michael Berenis resides) does not have a law against chrome exterior “paint”.

While chrome plating a car might not be everyone’s cup of tea, the end result of Michael’s project is a car that is unmistakably eye catching. Once the car was finished and ready to hit the road with enough bling factor to make most rappers blush, he put together the video below showing this sparkling Ford Fiesta ST from all sorts of angles – including a collection of clips and images of the hot hatch on the ranch of Robert Collins.

Check out the video below for a look at Michael Berenis’ 2014 Ford Fiesta ST all wrapped in chrome and for a closer look at the Fiesta ST in action (not in chrome trim), check out all of the videos in his YouTube channel! Do you like this look? Tell us what you think in the comments below!